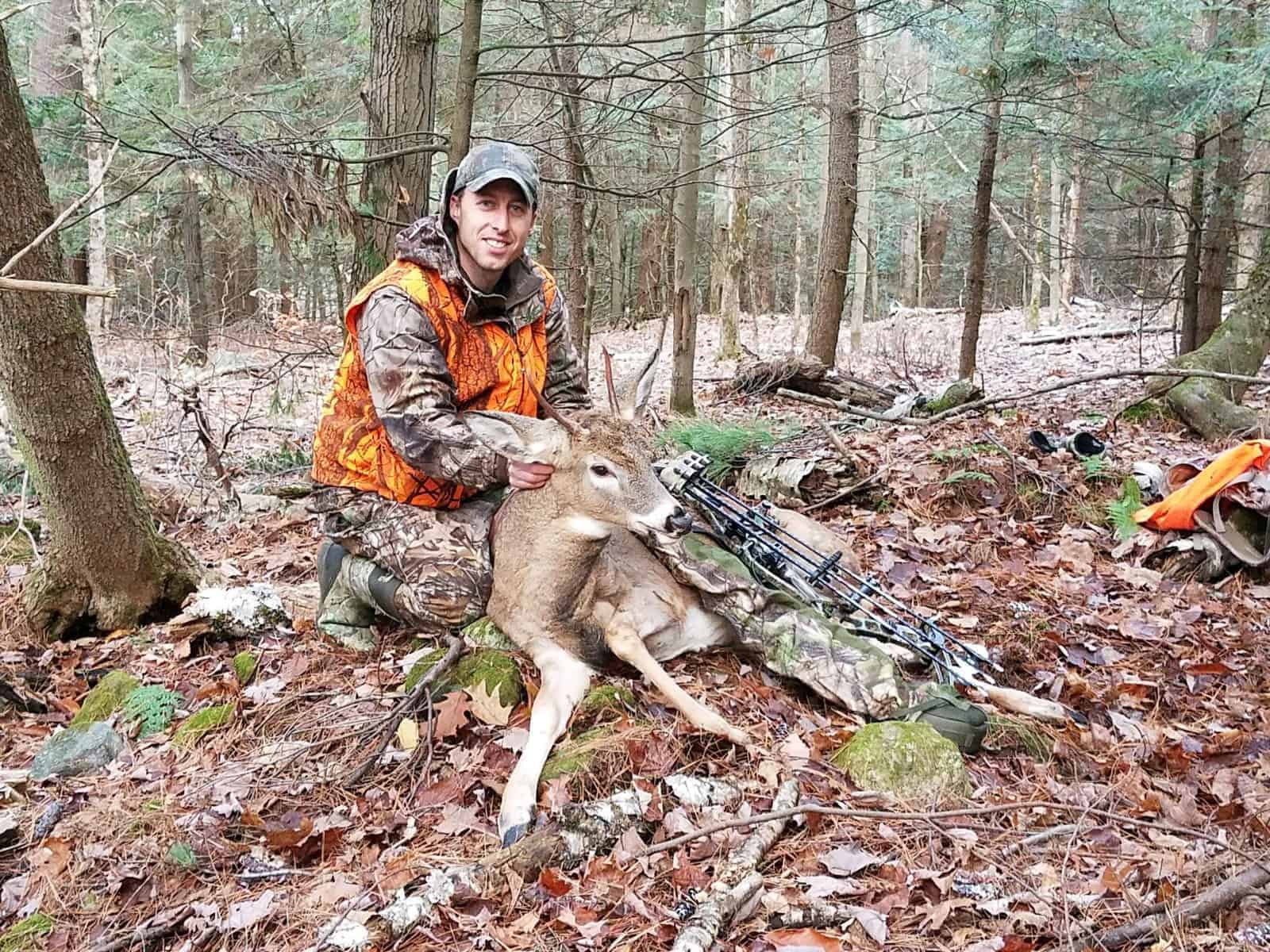 If Sam and I were ever going to shoot a deer together at his age, I knew we would need a pretty dumb deer to walk by. Maybe one like a yearling buck experiencing a surge of testosterone that clouded his ability to sense danger from the dynamic father and son duo perched above him. On the evening of November 7th, we had a meeting with just such a buck.

As I tucked Sam into bed the night before, I told him that on our hunt the next afternoon he could sit with me in a double seater ladder stand. He’s been wanting to sit in one for a long time and his eyes lit up with excitement. This was the real deal to him. We’d finally be hunting like real hunters. I told him mostly true stories of deer I’d killed from treestands to foster his growing excitement, and then out of the coldness of my heart, I told him sternly to go to sleep. “I don’t want to hear from you again!” I growled at him (jokingly, of course).

Tuesday afternoon came, and we headed for the woods. It didn’t take long after settling in that I could see the view from on high was living up to his expectations. He loved it. We went through our practice runs on what to do if a deer came from various directions, like how he would slide out of the way if one came from the right, or what to do if one came from behind us. You know, just in case…. 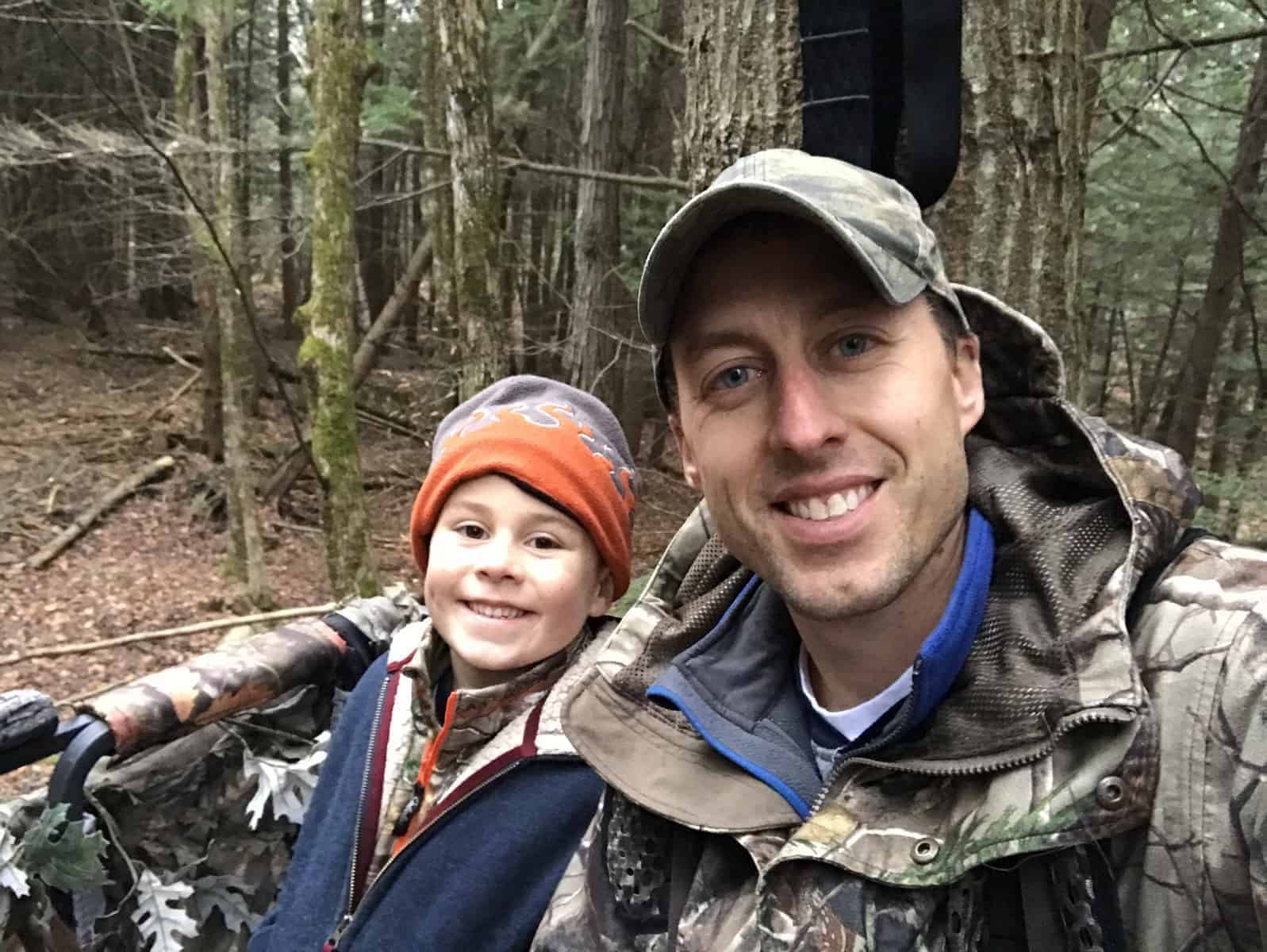 We passed the time by watching two gray squirrels bark at each other from different trees out in front of us as sparse snowflakes wafted by indicating a good wind direction for the evening hunt. I had just finished teaching Sam how to tie the most important knot a woodsman needs to know when things changed. “That’s a square knot,” I whispered. “It’s the most important knot a woodsman should know.”

“Cool, Daddy. Teach me another knot.” He said. It was about this time that I heard the snap of a twig behind us. My knot tying teaching skills would have to wait another day. The arrival of a different woodland creature in our presence was the hunter’s version of being saved by the bell. I need to learn how to tie more knots before our next hunt together.

I turned slowly and saw a deer head protruding from the base of a tree behind us. I’ve been fooled by hundreds of tree deer before, but this one was different. It moved. “Don’t move, Sam!” I excitedly whispered. “Deer!”

It was feeding on some acorns as I peered through my binoculars for a better look. By then I had told Sam he could slowly turn and watch. The treestand we were in was fastened to a mighty tree of some sort that split into two massive trunks just below the level of the stand. We were well concealed from the deer and Sam was able to turn and watch through the fork in the tree without being noticed.

“It’s just a small one, Buddy. Are you sure you want me to shoot it?” I asked.

His reaction was priceless – eyes wide and nodding his head. We have been trying since last season to see a deer together on a hunt, but so far, we had come up empty. That was all I needed to see from him to switch gears from “safe” to “fire”.

The events that followed provided a great teaching moment as a father. When something doesn’t go right, it’s important to act as though it was on purpose so it can be used as an opportunity to explain how we live in an imperfect world and everything doesn’t always go as planned. Sometimes things happen for reasons we don’t understand.

Needless to say, I missed. The deer stopped broadside at thirty yards on the dot, but I’ll be danged if he didn’t duck my arrow! Everything looked great and felt great about the shot, but he dropped so fast at the release that I could only watch in disappointment as the arrow just barely cleared his back. Visions on Keanu Reeves dodging bullets in the Matrix came to mind. 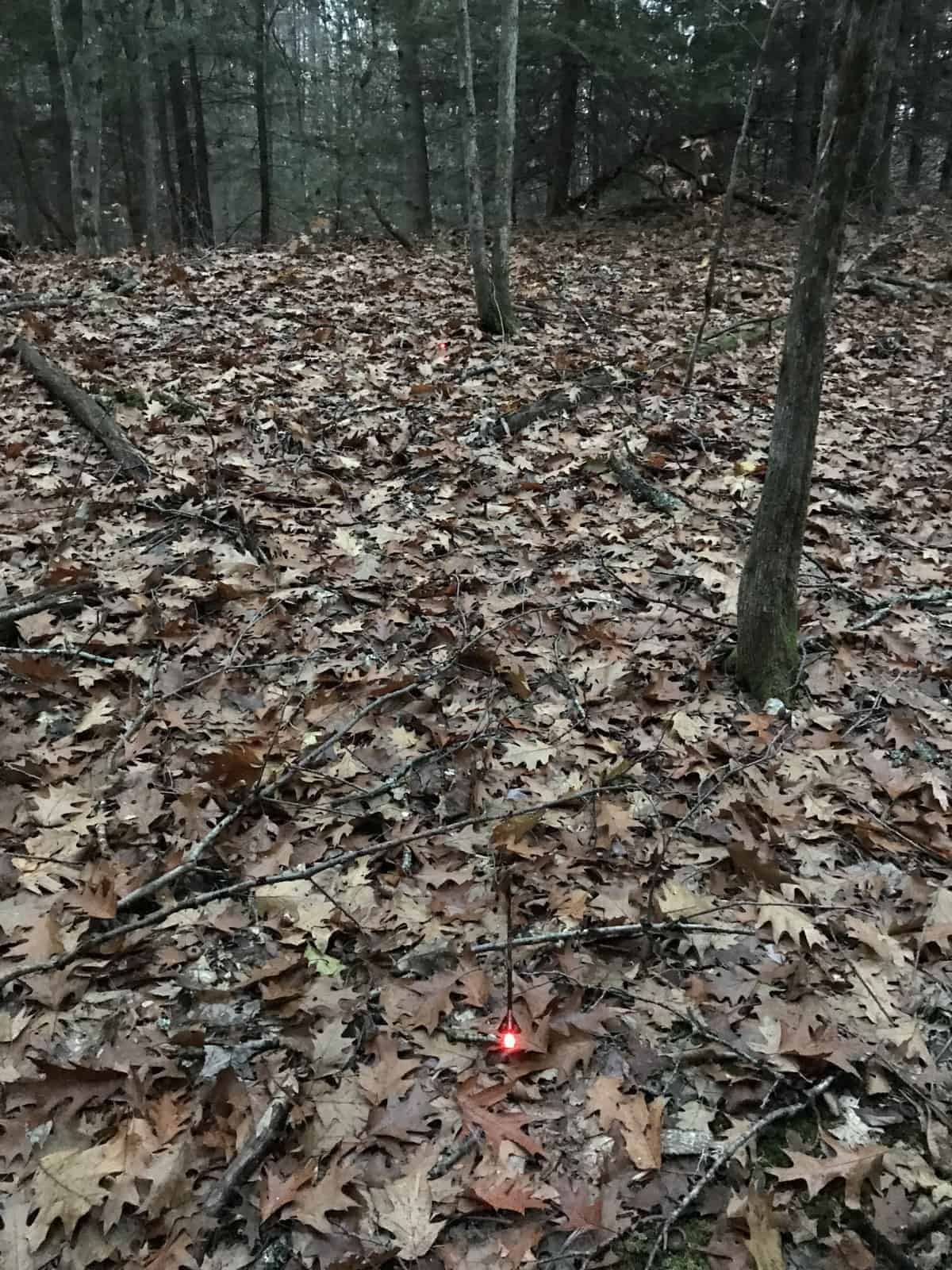 “Well, there goes that,” I thought to myself. But I kid you not, I had no sooner nocked another arrow and he was back closer than where he was standing before I shot at him the first time! This was a buck looking for a freezer to call home, and it was exactly the kind of deer we needed. After a few tense moments (he was really onto the dynamic duo in the tree above him now), he gave me another shot at twenty-seven yards. This time I planned for his drop and put my twenty yard pin behind his shoulder. He dropped down just as I’d predicted and the arrow passed cleanly through, leaving two lighted nocks lined up nicely in the leaves about three yards apart. What I didn’t plan for was that when he dropped, he also lurched forward a bit and my arrow hit him further back than I would have liked.

Sam was really excited, and by the time we made it over to inspect the arrow he was shaking with adrenaline. The arrow was solidly coated in dark blood, indicating what I presumed to be a liver hit. After an excruciating hour of waiting, we met up with Dad (Papa, to Sam) who was also out hunting, and we picked up the blood trail. At first it was pretty good, but it wasn’t long before it started to peter out. After seventy yards, I called off the search for the night knowing it would be best not to push him. It was hard to do because I really wanted Sam there for the recovery of the deer to bring the hunt full circle for him.

It was the right call. The next morning was opening day of rifle season in New Hampshire, so dad started off the day where we called off the search, and I slowly worked my way along the hill below him, scanning the ground and brush for the buck. Just about the time I thought I might find him, I did. He hadn’t gone far from where we called off the search the night before. He was small in stature but huge in memory. At 98.5 pounds, he was quite possibly the biggest little buck ever killed, just barely surpassing the first deer my dad and I got together when I was just a wee lad. 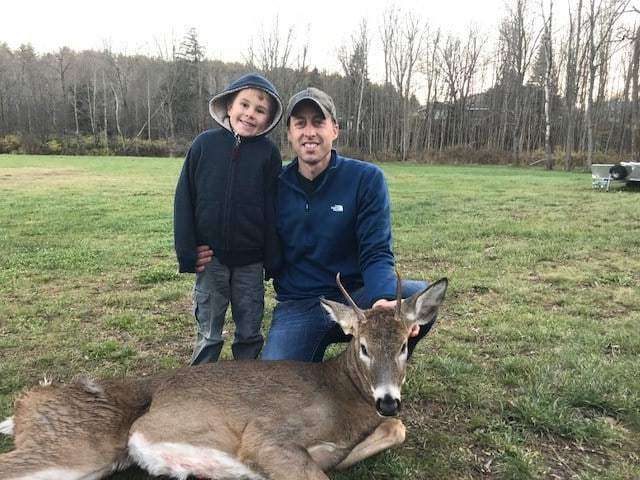 It’s Leopold’s words that come to mind in his book A Sand County Almanac. When recalling a particular fishing excursion, he writes, “I shall now confess to you that none of those three trout had to be beheaded, or folded double, to fit their casket. What was big was not the trout, but the chance. What was full was not my creel, but my memory.”

Sam already has a spot picked out for those little spikes on his bedroom wall. Now when I tuck him in at night, we can both sit on his bed and look at that little set of antlers and relive the memory we made together. No doubt our versions of the story will be told slightly differently. Mine will be filled with half-truths and exaggerations. Why not? If he calls me out on them, I’ll just growl at him and say, “Go to bed! I don’t want to hear from you again!”

He’d deserve it for trying to work the truth into a priceless memory.  It’s not my fault that I view that spike as a monster buck. Well, monster in memory, anyway. When he gets older I hope he feels the same way, just like I do when I remember that big, little six point my dad and I got together when I was barely older than Sam is now. Deer, like memories, have a way of growing over time.

Thanks for taking the time to read my ramblings! I hope you were able to make many great memories this season too!

Hey, if you haven’t subscribed to The 4 Pointer, you should do that here: Subscribe