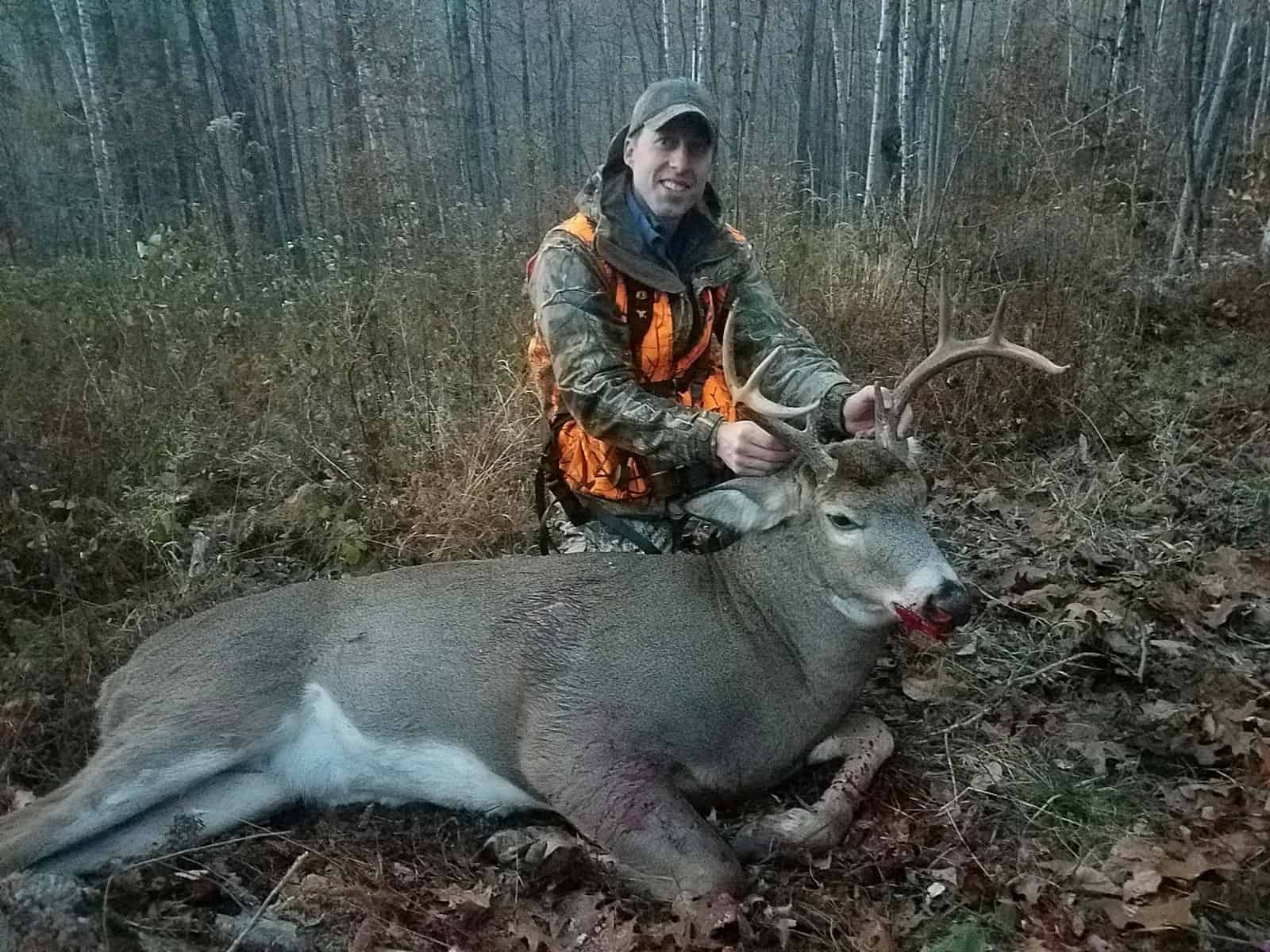 As much as I’d dreamed of joining the coveted 200 pound buck club, I’m not sure I can say with confidence that I thought I’d ever be fortunate enough to become a member. I have intentionally hunted areas in Vermont and New Hampshire that have the potential to produce that caliber of a buck but hadn’t had any luck to date. This can be blamed on many factors, with myself being the biggest one of all. That all changed on opening day of the 2017 Vermont rifle season.

The frigid temps Saturday morning had me guzzling my coffee before the cold sucked all the heat from it, and I did my best to keep my fingers from freezing solid and breaking off. The index finger is important to keep attached for multiple reasons, but especially for pulling the trigger should the need arise. By 7:45 a.m. I was done. I felt like a real wuss, but the combination of cold temps and the nagging thought of not knowing what was over the next hill finally convinced me to get on the move. With a little less time to hunt this year than normal, I had spent all my available hunting hours to date in New Hampshire pursuing the big fella’s over there. Small ones showed first, so they had my tags placed on them and are now stacked nicely in my freezer. While I enjoyed my time filling tags in New Hampshire, I hadn’t spent a single moment in Vermont scouting. I had to know what kind of deer sign was in the area.

So, hike I did. I still hunted my way around in circles, doing my best to keep the wind in my favor with my eyes peeled for movement below. I was encouraged by the amount of buck sign I was seeing, even though the scrapes were a few days old at a minimum. At least it meant there were bucks in the area. 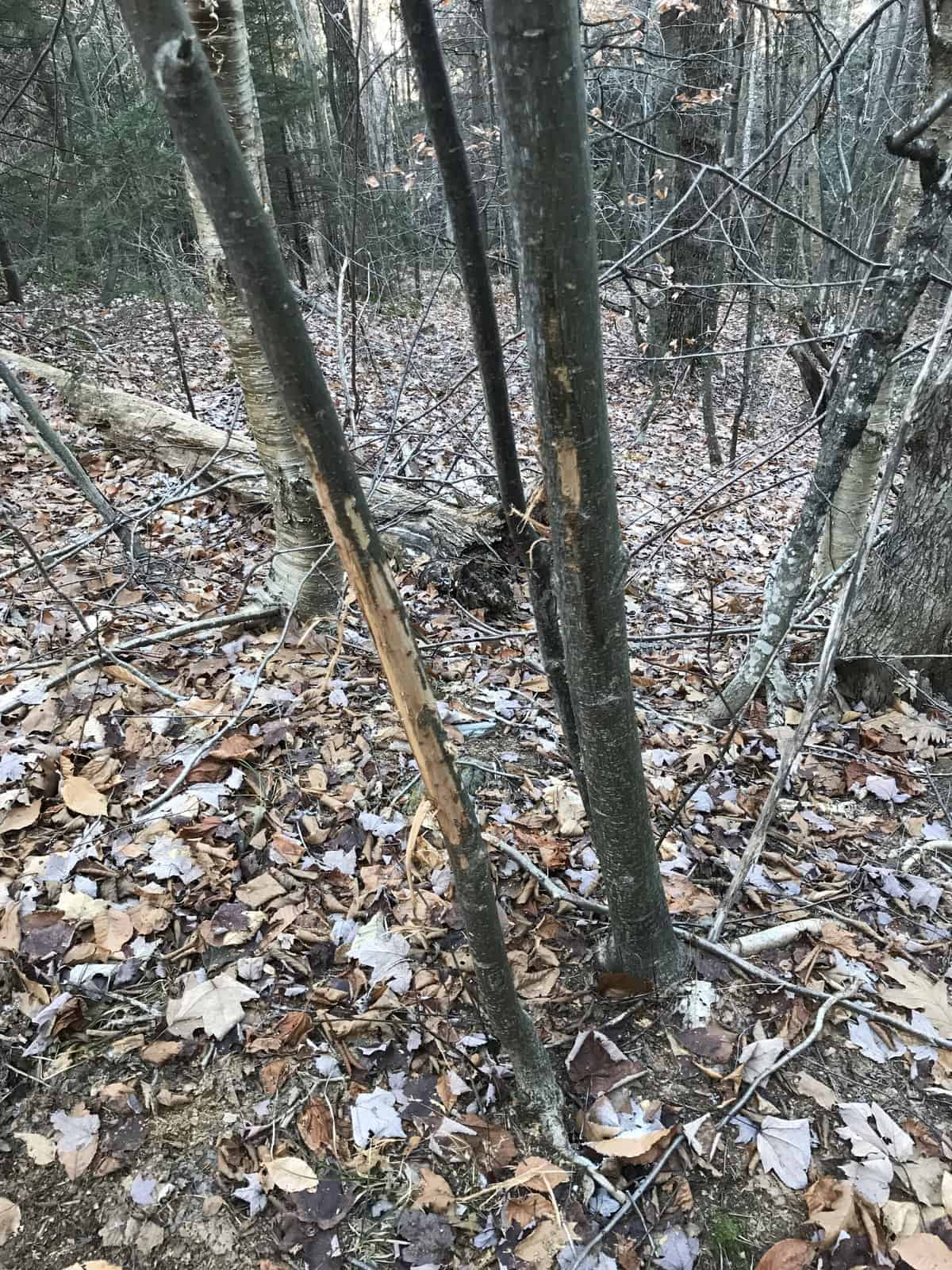 “Paying attention has never been more important,” I told myself as I scrolled my Facebook feed to see what kind of success others were having while I sipped a cup of coffee. The faster a drank it, the lighter my backpack became, but it also meant I’d run out of coffee sooner – a real catch twenty-two. Other than figuring out how to use the restroom of the great woods with frozen fingers, it was my first true conundrum of the morning. It’s kind of ironic how they are related to each other. It’s a vicious cycle that I see no solution for.

After close to three miles of walking, I had discovered two promising looking areas with heavy feeding sign. Both were in the oaks and located a little over half a mile apart. Decision time for the evening sit was fast approaching. Do I sit in spot A or spot B? Or should I go home and take a hot shower? There were a lot of good college football games that needed to be watched from the comfort of my couch. NO! But I will admit that I was tempted to leave. Dad didn’t look like he was feeling great and I’ve never had any luck hunting here in the afternoon. We stayed.

We decided to take some time in the early afternoon to move a stand to one of the areas I’d found. The entire time we were setting it up I still wasn’t convinced that was where I wanted to sit for the evening. Spot B was calling to me. Call it laziness or call it fate, but in the end, I decided to stay put. I’m glad I did. Don’t let anyone tell you that being lazy doesn’t pay off.

I settled in for the afternoon and entertained myself by trying to stay warm and watching a couple of chipmunks chase each other around the countryside. Despite my best efforts, I could not grow a legal set of antlers on either one of them. The entire day had felt dead. Only a few lonesome shots off in the distance kept my hopes alive that the deer were on the move. As the sun sunk below the hillside across the valley, I once again found myself wrapped in cold shadows and thinking about a hot shower.

And then in an instant everything changed. I spotted a deer moving through the hardwoods approximately 100 yards to my left. My heart started pounding as I reached for my rifle. “Doe. Bummer.” I said to myself as I looked at her through the scope. I didn’t see any other deer with her, so I decided to pull out my phone and take a video of her in order to prove to Steph and Sam that I actually saw a deer. Unless I provide visual proof, they don’t believe anything I say. I don’t know what I’ve done to deserve that kind of scrutiny. I watched behind her intently as she worked her way to within thirty yards of my stand hoping to see a buck behind her, but she appeared to be alone. Then, instead of stopping to feed under the oaks, she started trotting. “Hmmmm….she doesn’t know I’m here and the wind is perfect. Maybe there is hope that a buck is following her,” I thought.

She had no sooner trotted out of sight when I looked and spotted another deer right where I had first seen her. I quickly put down my camera and shouldered my gun. It was a buck, no doubt about it. I could see his eight point rack clearly in my scope but had no shot. I wasn’t nervous at all. Everything was playing out just the way you’d expect – a nervous doe trots by and another deer shows up on the same trail well behind her. Of course it was a buck. I expected it to be a buck. It only made sense and it lessened the normal adrenaline rush that comes with seeing a buck. Now, if I had heard him coming for a long time before seeing him or if someone had whispered in my ear that it was a buck that would crest the 200 pound mark, I probably would have peed my pants out of excitement.

I watched him but didn’t study him. The only thing I was focused on was waiting for him to stop in a shooting lane. The whole moment seemed surreal as I let him close the distance. I had no fear of him spooking. The wind was perfect, and he only had one thing on his mind – the doe, and her path would lead him right by me. I let him walk all the way to within forty-five yards before I had all I could take. He stopped in an opening and my little .243 fired just as I’d trained it to do. He did a classic mule kick upon impact, indicating a solid hit. After running thirty yards, he stopped and looked back in the direction he’d come from. My gun went off again for good measure, the second shot passing right through the same entrance and exit hole as the first. They don’t call me Ol’ Deadeye for no reason. 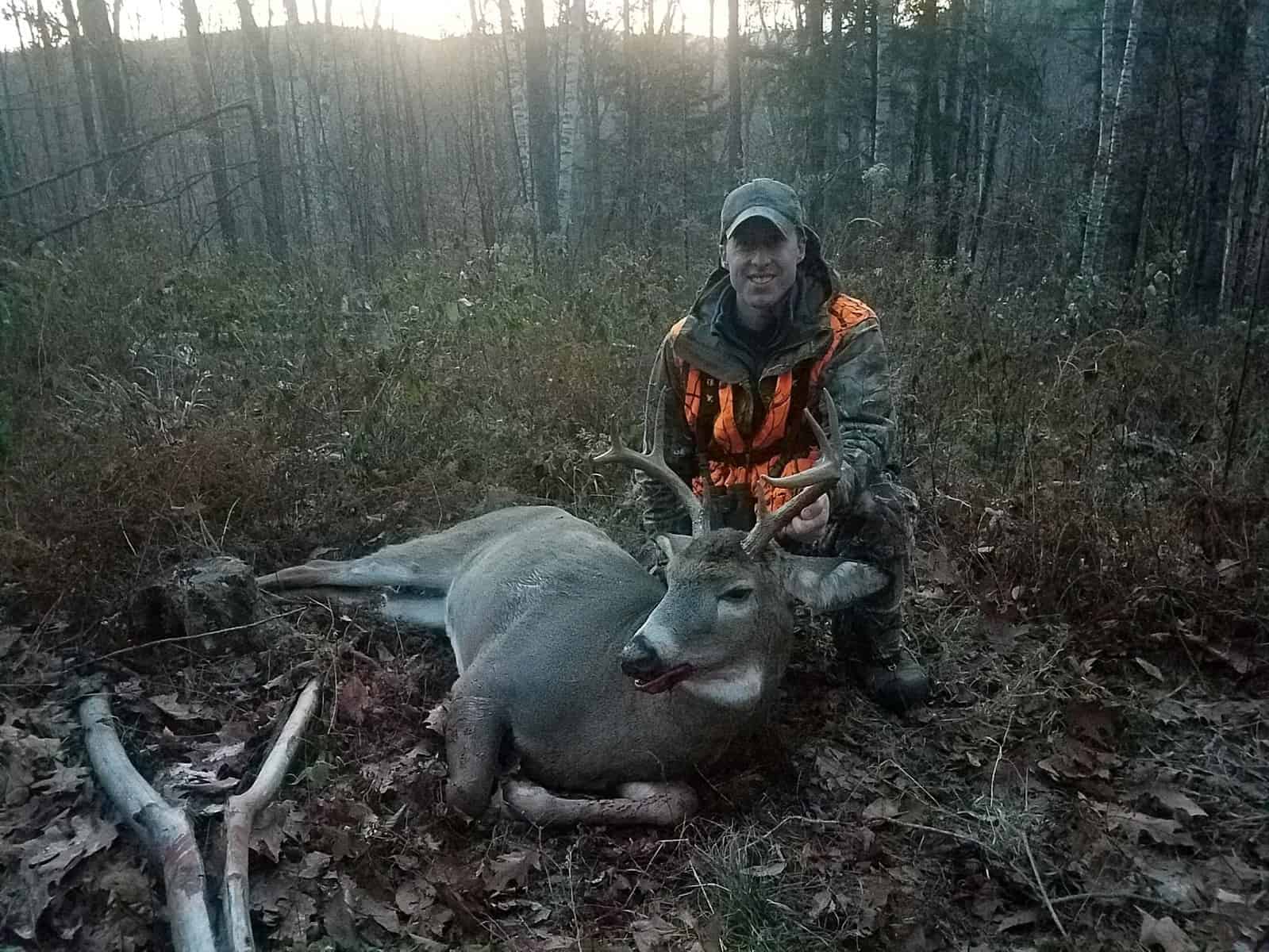 When I shot him, I assumed he was just a solid eight point. The first time I thought he might be heavier than normal is when he tipped over and there was a resounding “WHUMP!” that thundered along the hillside. Geologists in the area are still trying to determine the cause for the spike in the Richter scale Saturday afternoon.

I texted my wife, called my dad and packed up my junk. I’ll never forget the feeling of walking up to him. I’m more accustomed to ground shrinkage than growage, but this guy seemed to get bigger the longer I stared at him. The rack was about what I thought it was – a typical short tined Vermont buck, but that body…. It was like bull moose drunk on love confused a doe with a cow and made a mutant baby.

I feel so fortunate to shoot a deer like this, but at the same time, I also feel like I didn’t deserve to this year. Each season I envision putting in lots of time scouting, trying my best to pattern Mr. Big and then formulating a game plan around my findings. That wasn’t the case with this buck. In fact, it was the exact opposite. My entire game plan for Saturday relied on years of history in the area, plus the sign I took the time to find that morning. It’s a strategy I’ve employed hundreds of times with no immediate results, but this time it was different. Why?

Three reasons come to mind. First, I had positioned myself in the right place. I will take credit for that. I also happened to be paying attention. It’s amazing how much that helps. Second, I was there at the right time. I’ve gone entire seasons convinced I was in the right place, but the timing never proved to be right. The deer are in the woods twenty-four hours a day, I am only there when time allows.  This year the timing aligned. Third, and probably the most important of all, a spindly little four pointer didn’t come along first….

There you have it, my first 200 pound buck. Some have suggested I retire from hunting now. How absurd is that? Did Michael Jordan retire after his first championship? Did Tiger Woods retire from golf or Jimmy Johnson from racing? I’m offended at the mere suggestion!

Great job, Tim. The deer came to you, which is how it works for all of us. You made it happen for time and place. Well done. Enjoy the memories. It took me 3 deer to accumulate 200 pounds; you did it in one deer !