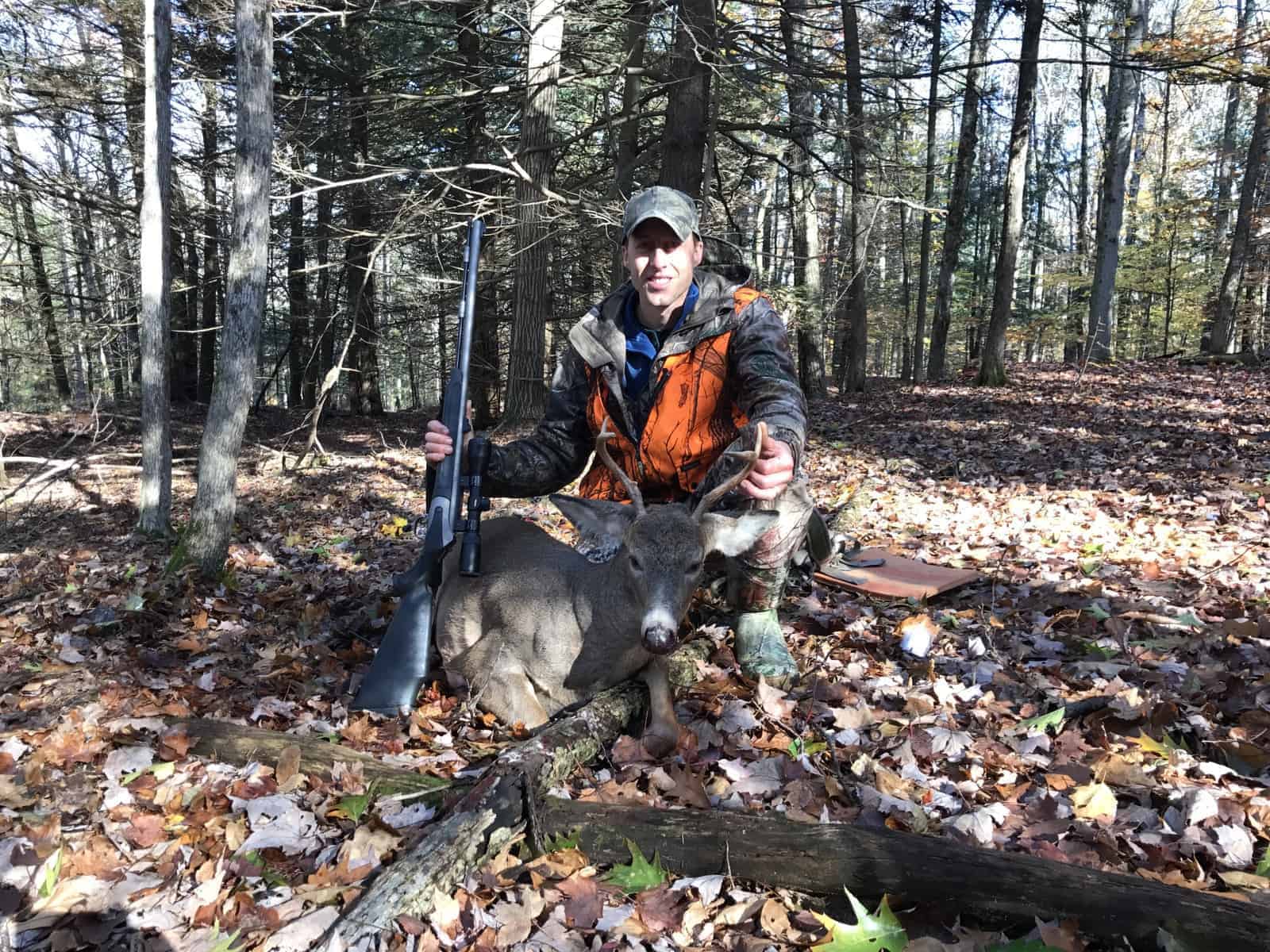 Not much sleep was had the night before the 2017 New Hampshire Muzzleloader season opened. Excitement over what the morning hunt would bring, coupled with Oliver’s continued desire to hold fast to a different sleep schedule than normal humans, made it difficult to roll out of bed. To top it off, I still couldn’t shake the deep-rooted congestion that had taken up residence in my respiratory system. A weaker individual would have stayed home, but not this guy.

Who in the world decided to meet at 5 a.m.? (My Dad.) I arrived at my stand almost a full hour before legal shooting light. Orion’s Belt was particularly brilliant as I sat at the base of my tree and stared in amazement at the stars for an hour. As daybreak broke, I discovered that although this strategy is good a reducing the number of times I needed to blow my nose, it was not an effective method of scanning the woods for deer movement. Not many deer live in the sky.

The occasional coughing attack kept me and the locals on edge. My friend, the chipmunk on the stonewall, had no idea what to make of me. I considered coughing into my grunt tube as alternative noise. Maybe one of the many bucks in the area would be offended and come looking for a fight.

There were many bucks using the area I was in according to my trail cameras, some of them even during the daylight. A few fresh scrapes dotted the hillside and the acorns were plentiful. I was also on an escape route for the deer should they be spooked by something on the ridge above. The wind was calm and the sun bright. I even remembered to put a primer in my muzzleloader. Confidence was high.

Around 8:45 a.m. I had a sudden cough attack, one of those that can’t be stopped until half a lung comes out. As soon as I coughed, I heard a deer take off on the hill behind me, and I turned around in time to watch a deer bound away gracefully through the oaks.  I couldn’t believe it! That one thirty-minute stretch of the morning when I failed to look behind me. Tricky, these deer are.

I was frustrated, to say the least. Here I was in position well before daylight, fresh scrapes on the ground in a buck paradise, and my stupid cough cost me a chance at only the second deer I’d seen all fall, plus part of my lungs. Argh! I felt sorry for myself for a bit and then gathered my wits, which were strewn amongst the tissues that were littered on the ground around me.

The deer did not seem overly frightened and had bounded off tentatively. I considered for a moment packing up my belongings and trying to cut it off further down the hill. From the angle it had run away, it appeared that it was going to veer to the left and down a drainage swale that was out of my sight over the edge of the hill. I could swing wide and watch the bottom of the drainage in case that was the route the deer decided to take, but ultimately thought better of it. There were other deer in the area and I’ve heard that patience is a virtue. I decided to give it a try.

Since the deer didn’t seem too scared, I let the area settle for two or three minutes and then tipped my can call a few times. I was not convinced that the deer saw me or that it was convinced it was a scary predator like me that made the noise. I think it only heard me cough, which startled it enough to cause it want to put some distance between us.

I was right. About ten minutes later I noticed a beech tree shaking in the direction the deer had run away.  It was strange because there were no other beech trees shaking in the area. I pulled up my binocs for a closer look and saw the butt end of a deer poking out behind a big hemlock. I surmised that the front end was rubbing the trunk of the skinny sapling. “I’ll be danged,” I thought. “It’s come back for round two.”

With the deer’s head behind a tree, I took the opportunity to move into a better shooting position and waited. I saw an antler tip at one point and decided I would shoot when I had a chance. I never took another close look at the deer until a few moments later when I centered the crosshairs on his chest and squeezed the trigger. Just like that, it was over.

Much to my enjoyment, the deer ran uphill toward the truck after I shot. It was a welcomed sight with how far down the hill I was. I took my time reloading, partly to enjoy the moment, but mainly because I couldn’t find my dry patches I needed in order to wipe the barrel. The sun had finally broken through the fog, casting a golden hue on the entire area. It had turned into a picturesque morning, except for the pile of tissues that had accumulated on the ground beside me.

The blood trail was heavy, indicating a solid hit, and I was so focused on following the blood that I almost stepped on the deer before I saw him lying in the leaves. He’d only run forty yards before expiring. After celebrating and giving thanks, I got to work. Seconds into the endeavor I was reminded of one of my own favorite quotes –  “One does not fully appreciate the value of a sharp knife until attempting to field dress a deer with a dull one.”

If I can find the time, I have a few more thoughts about the hunt I’d like to express. There is more to the story that needs to come out. Hopefully, in the next few days I can make that happen.

A “Bruiser” of a buck. Well done, given your other responsibilities of late. You might have drowned on Sunday or been blown over. Here’s to another good opener on the other side of the river.