Who Would Fish For Ice? 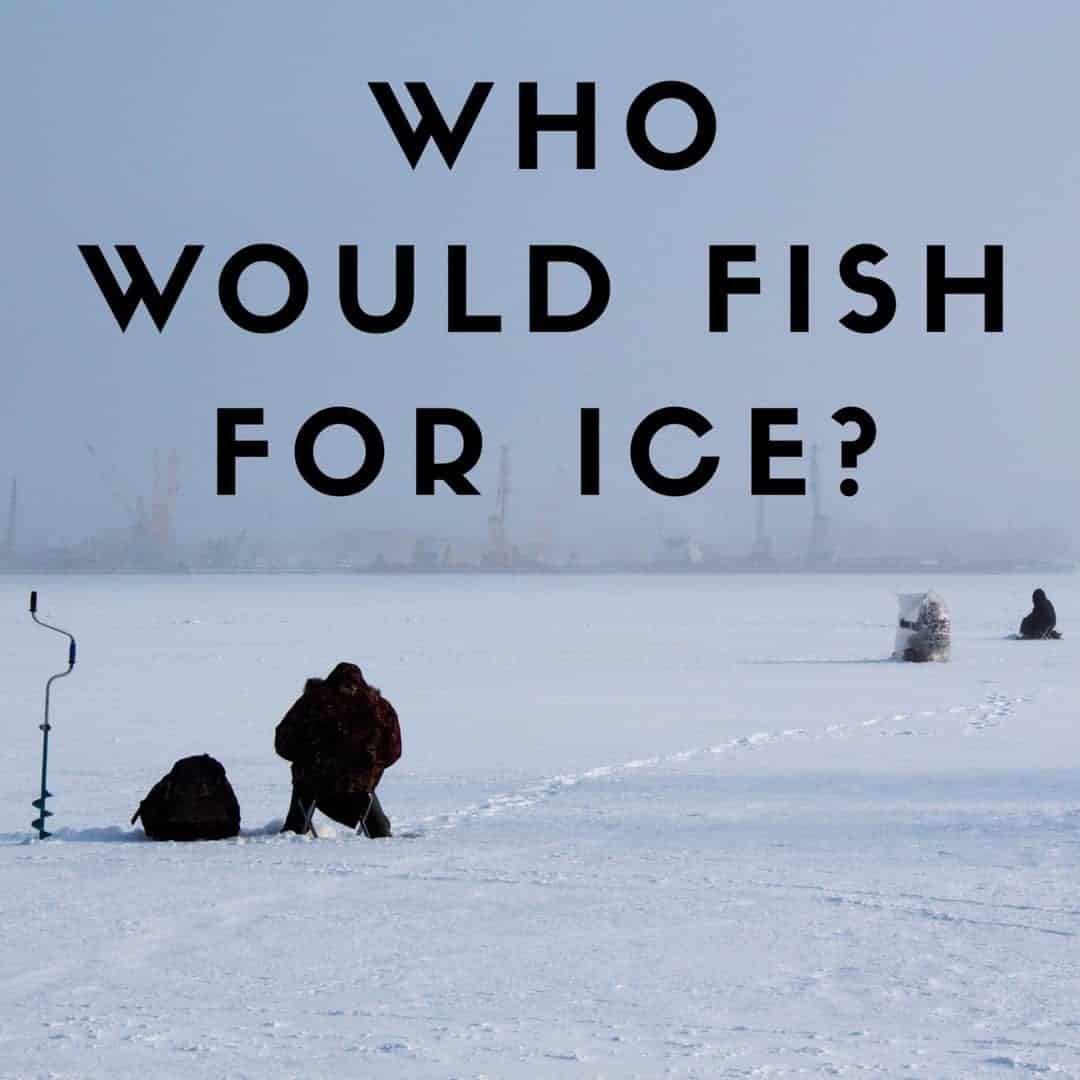 There is a hole in the ceiling just outside the door of the room where I sit typing at this moment. It’s a small hole, one that provides access to the plumbing leak in the bathroom above. It also represents despair and madness – I hate spending time repairing stuff instead of doing something more productive. So much so, that whenever I decide to finally fix things around the house I develop a maniacal laugh of sorts that drives a wedge of uneasiness between me and anyone within ear shot, including my dog.

I was not born with the laugh. It surfaced after my first and only ice fishing trip. It took professionals the better part of ten years to determine why the sight of a hole, specifically one through the ice, brings on uncontrollable laughter and a crazy-eyed stare. Little orange flags waving in the wind produce a similar result.

Therapists used to study me in groups because they were so baffled at what would trigger the fits of laughter. Case studies on my condition practically saved the top five medical journals of today that were floundering at the time and in danger of declaring bankruptcy. Part of the diagnosing process involved a test where a single therapist would flip through a series of flash cards and ask me what I saw while the others gathered around and dissected my answers.

“What do you see here?” the flipping therapist would ask.

“How about this one?”

I would hear the group murmuring in the corner, confused at how I could arrive at answers like that after pictures of yellow triangles and red squares. Steely glares would shut them up quickly. Some people are too overeducated for their own good.

The flash card that would always trip me up was the one with the black circle on the white background. Without fail, I’d begin laughing the instant I saw it and enter into a trance-like state. First it was a quiet laugh, but it would grow louder, and my eyes would bulge the longer the therapist held it in front of me. Medical reports stated that during the episodes I would go from laughing uncontrollably to sobbing hysterically. Even now I don’t recall the flash card, I only know about it from reading the case studies. My mind has erased it from my memory forever. Strangely enough, I have no problem remembering the bucks.

Discovering the treatment was an accident, as was discovering the cause. The therapists had really taken to me, partly because they liked the stories I told, but mostly because they had a received a federal grant to continue the study and discover the cause and cure, which would have been counterproductive to their comfortable lifestyle. In addition, the advertising money had really started to pour in to the medical journals. That’s a flow that publishers weren’t willing to cut off.

“Show him the card again!” a therapist would yell and they’d all burst into laughter.

One day when I was deep into a trance, one of the more clueless therapists in the bunch, Troy, entered the room with a fresh cup of hot cocoa. Instantly, I began to return to normal. I never saw Troy again, and the other therapists told me he had been transferred to a management position.  Nevertheless, the others decided to tease out the effectiveness of the hot cocoa treatment. One therapist would flash the card, which would cause me to begin laughing, while a different therapist would reveal a cup of cocoa at various time intervals. It was brutal. Later testing discovered that a mere picture of a woodstove would bring me completely back to normal when paired with the cocoa.

As I mentioned earlier, discovering the cause was a complete accident as well. The longer I’m alive, the more convinced I become that this is how the scientific community and IT professionals work. Therapist Harry had a bad habit of ice fishing on the weekends and happened to be walking by the exam room at the precise moment the black circle card was flashed to me. Harry made it back to his desk, but barely. He was rendered ineffective until one of the secretaries brought him a cup of cocoa to quiet his laughing. The laughing stopped, but the ineffectiveness continued the remainder of his career. Eventually it was determined that Harry’s problem was a separate issue and nothing could be done. The last I heard of Harry was that he’d taken a position in the federal government.

Harry’s reaction to the card provided the final link between my bouts of hysteria and ice fishing. Yes, ice fishing. It was determined that the card with the black circle, or the “Trigger Card” as it was called in the case studies, would remind me of ice fishing holes on a snow covered lake from my first and only ice fishing trip. I was but a young man when the trip took place – back when the winters were cold and the fish didn’t bite.

Once the cause of the laughing fits was identified, the floodgates had opened in my previously closed memory vault. In what would be the final article in my case study, the lead therapist detailed my testimony of the trip word for word:

“My father’s friend had invited us to come with him for a weekend of ice fishing in northern Vermont. It was a desolate place – nothing but ice, wind, and cold. I don’t remember the name of the lake, and part way through the trip I had my doubts that we were actually on a lake. You wouldn’t have known it by the fish in the creel. Only the occasional sight of water in a hole would give me hope that we hadn’t been thrown off course and accidentally drilled our holes in bedrock. Otherwise, they would immediately ice over.

The wind steadily increased throughout the day and the temperatures plummeted. From what I understand, these are ideal conditions for ice fishing. I was not to be fooled; neither were my dad and his friend. At some point during the day, the truck was driven onto the ice and the three of us piled in and watched the flags from the tip-ups positioned over the holes in the bedrock.

As you could imagine, a ten-year-old boy in the back seat of a truck listening to a couple of adults solve the world’s problems was not the most invigorating time. After some time, I supposed it wasn’t for them either, since they had fallen asleep. That left me to watch for flags.

The first flag was exciting, but it was a false alarm. The same could be said for the second. By the third flag I had grown skeptical of the effectiveness of the tip-ups. When the fourth flag popped I was convinced the whole thing was a joke. All false alarms.

I remember staring out the windows at the vast expanse of nothingness, the flags visible only between breaks in the wind when the blowing snow would settle. Eventually, when a flag would pop I wouldn’t even say anything at first. My eyes would slowly grow wider and I’d press my forehead to the back window. Then the laughter would come.

“Quit that laughing back there!” my dad would awaken and yell. This approach worked for the next couple of flags but over time it grew worse. The laughing grew out of control and the adults soon carried me into the cabin and placed me by the fire with a cup of cocoa as a last resort.”

Tears were welling in the therapist’s eyes by the time I finished telling my story. I thought I heard him gasp, “The horror!” at one point during my testimony, but I couldn’t be sure. Therapists don’t say much, they just ask questions and listen while trying to look smart. Even now it is difficult for me to relive the experience. I’ve consumed a thermos and a half of hot cocoa during the time it took to get these words on paper in an effort to keep my composure.

But oddly enough, I’ve recently considered giving it another try; specifically, each time I think about the hole in the ceiling just outside this room. I’m sure my wife would understand. Ice fishing can’t be all that bad, can it? I mean, if I can sit on a rock and stare at trees while waiting for a deer to step out, why can’t I sit on a bucket and stare at a hole through the ice while waiting for a fish to jump out? Maybe it’s time to try it again. I feel a strange laugh coming on….