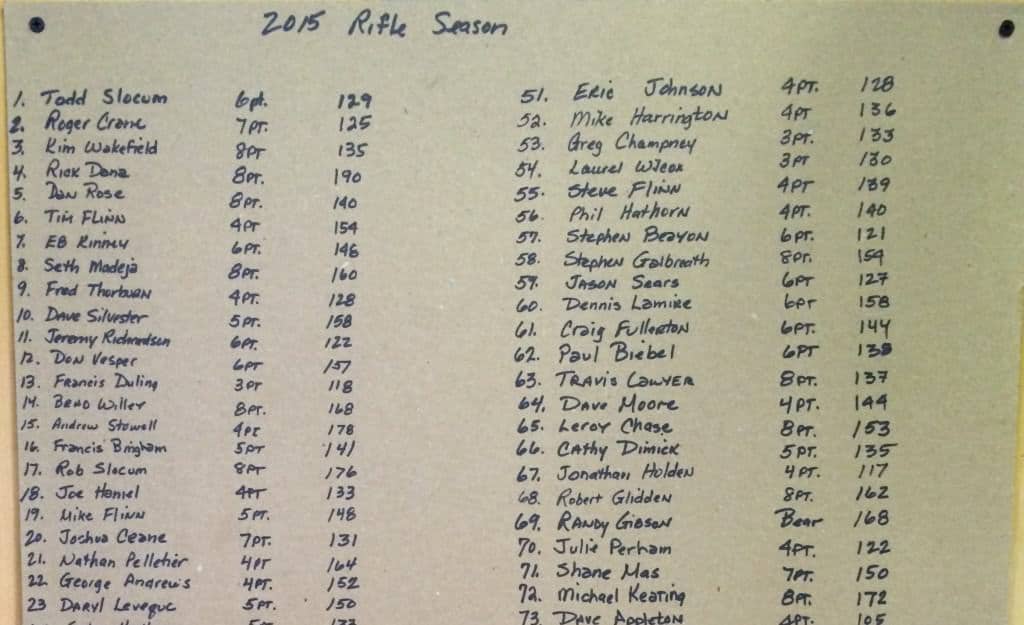 I’m a guy that likes stats. I admit it. I can’t wait for the data to come back from all of the teeth that were collected during rifle season in Vermont this year to gain a better understanding of the age structure of Vermont’s deer herd. Additionally, I am really looking forward to seeing how points bucks are carrying on their noggins by age. It’s going to be sweet.

But because I am an impatient kind of guy, I decided to collect some data on my own from various check stations to see if I could get a jump start on the results. Without knowing exact ages of bucks, I had to use average weights as an indicator of age. It’s not exact for sure, but maybe it’s close. Before I break down the numbers I must state my usual disclaimer: THIS IS FOR FUN. TAKE IT FOR WHAT IT’S WORTH. (FYI – so far I have yet to have sponsors throw money at me so that is probably a good indication of the value 🙂 )

Let’s get to it. I used data collected from 3 different check stations for a total of 281 bucks. The check stations were R & L Archery in Barre, VT, Bridgewater Corner Store in Bridgewater, VT, and Joe’s Taxidermy in Reading, VT.

In 2014, the average weights by age of bucks taken during rifle season were as follows: 1 year olds were 117 pounds, 2 year olds were 138 pounds, and 3 year olds were 158 pounds. Since those weights are averages I had to take some “creative license” to determine how to classify bucks by weight. So, I used the weight halfway between each average as the cut off for age. For example, 127 pounds is halfway between 117 and 138 so that was the cut off for 1 year old bucks. Clearly there is room for error, but I couldn’t come up with a better way to do it. Every buck that weighed 127 pounds or less I classified as a 1 year old buck. Every buck that weighed between 128 pounds and 145 pounds was a 2 year old, and everything 146 pounds and up was 3 years old and older.

Here is the chart:

For those who are in favor of a 3 point antler restriction – this chart shows that 41% of this year’s harvest would not have been legal. And that does not account for all the measly 5 pointers and 6 pointers that barely had that 3rd legal point that would have been very difficult to see. Though my chart may be off, this is in line with data collected in the past. Click here to see a previous post on 3 point antler restrictions in Vermont.

For those who are not in favor of a 3 point antler restriction – this chart shows that at least 41% of this year’s harvest would not have been legal….

On the flip side, 59% of those bucks carrying 4 points or less are 2 years old and older.

I believe that the age structure of the bucks reported in the annual harvest reports is accurate, but I know many disagree because they claim that such a small percentage of deer were checked in those reports. The main reason I think they are accurate is because there is very little discrepancy year to year. The results are usually very close and do not wildly bounce around. In fact, the results show consistent trends in the age structure. If there was a lack of consistency I would be more apt to doubt the reports.

Thanks for reading. I’ve got a lot more thoughts, but it’s late and based on the smells emanating from my German Shepard laying at my feet it’s time for her to go out. I gotta go and so does she…