Thanks to all the layers of clothing I was pretty comfortable. The thermometer read 8 degrees but I was toasty warm. Then I got out of my truck and froze. The DJ was playing a sick joke and Joe Nichols was singing “Sunny and 75” on the radio when I put the truck in park. Two inches of snow had fallen on Wednesday night and this was my first chance to get out and hunt in it. I decided I was going to go sit in the climber that Josh had seen the two spikes from even though it was so cold in hopes that ole big boy would wander by.

I made my way to the stand but the lack of tracks on the walk in made me pretty disappointed to say the least. There were zero tracks within sight of the stand. Like a fool, I climbed up anyway. What could be more fun than freezing your tail off in a tree when there are no tracks around? Especially with “Sunny and 75” stuck in my head…To make things worse, Dad let me know the area around his stand was covered in tracks and that he had seen two deer while making his way to the blind he was sitting in. Grrr…..

I held out until 8:30 but it just didn’t feel right where I was at. Two hours perched up in a tree on the shady side of the hill was enough, especially knowing that the deer were elsewhere. I got down and checked a trail camera that was nearby. It was frozen shut, but since there were no tracks nearby I took it down and put it in my backpack. It continued to take pictures until I was able to thaw it out so at least there was would be something on the SD card, even if it was just of the inside of my backpack. 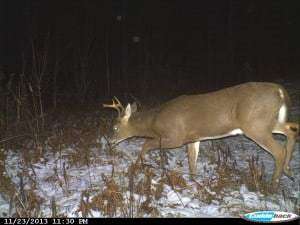 This young fella was the only deer on camera after it thawed out enough to check it.

I hopped on the 4 wheeler and went for a spin to check for tracks up high. Nothing. I covered about 5/8 of a mile (in one direction) and there was only one old set of tracks in the snow. I’d had enough and decided to revert back to my original game plan I’d been carrying out all year. From what Dad was telling me I hadn’t been that far off with my plan. I circled up high on a logging road above where Dad was sitting. There were some fresh tracks on the road that appeared to have been made that morning. “Figures,” I thought to myself. If I’d been there like I had been all year I probably would have seen the deer or at least heard them moving. The leaves and crusty snow made for very loud walking. To top it off, the wind was very calm so it felt like you could hear forever. If there was anything within 200 yards you would be able to hear it.

I continued on and reached a steep incline that was about 100 yards long. About halfway up I heard the unmistakable sound of an animal walking on a plateau at the top of the incline. In past years it has been a popular crossing for deer that are making their way around the ridge, but I wasn’t positioned well for an approach, especially with the noisy leaves. The wind was in my favor, however, and I inched my way up the hill every time I heard the noise up above me. I was hoping that the sound the animals were making would help mask my movements.

I figured it to be a long shot, especially with an approach from below, but I moved aggressively knowing that if the deer were moving I only had seconds to act before they moved out of sight. Each time I took a step I scanned the hillside with my bino’s hoping to catch movement. Finally, I spotted something through my bino’s.  At first I could only see only a leg. It looked like someone standing in a black Ghillie suit but then I remembered Ghillie suits are out of fashion and it was a bear. I stood there, slightly bummed that the deer turned out to be 3 bears, but enjoyed the sight of them feeding along. It was also nice to know that I had gotten with 80 yards of these wary creatures in the crunchy leaves. I felt satisfaction in that, and after five minutes of watching Mama bear and her two cubs, they fed out of sight above me and I continued on.

Eventually, I worked my way around the hill and dropped down over the other side. Tracks, tracks, and more tracks but still no deer. I had not jumped anything out either. If I had, I would have heard it. By 11:15 I had worked my way to within 300-400 yards of Dad. We have a trail camera positioned out there so I stopped to check it. While I was standing there I heard another unmistakably “crunch” of a something walking down over the hill. I had the advantage this time since I was so far above it but I was 10 yards from a tree that I could use for a rest on such a long shot.  Ten minutes went by before I was able to spot a deer feeding on the opposite hillside in the valley below. I made it to a tree by moving every time she took a step but in the end it was all for naught. No antlers. Just before she fed out of sight I saw another deer with her and I am fairly confident that was a doe as well.

After they fed out of sight I continued on to meet up with Dad. It was after lunch by the time we met up. He stuck it out for the rest of the day, but didn’t see another deer, and I went home to get a Christmas tree with Steph and Sam.