I’m a sucker for statistics. Ironically, I can only seem to remember 95.75% of them. Nevertheless, the public moose and deer hearing held by Vermont Fish and Wildlife at the Riverside Middle School in Springfield, Vermont made for an unforgettable evening. The evening started with me trying to locate a bathroom in the middle school. I didn’t think it would be that difficult but I eventually found one approximately a mile and a half away. For an evening full of important facts and statistics this little adventure was probably the most important of them all as the meeting lasted well over two hours. The last thing I wanted to do was leave at some important juncture to find a restroom. As an aside, I also learned that the best time to use a middle school restroom is after hours – very clean, something I’ll remember the next time in a middle school. 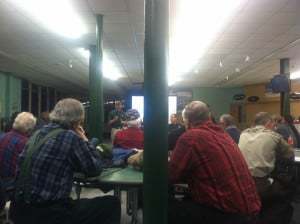 After my little trek I settled in for the meeting which was being held in the cafeteria. The ambience made me feel as though it was opening day. I was surrounded by flannel and camouflage along with forest green posts everywhere that reminded me of trees. One of these posts was in my direct line of sight of Adam Murkowski, the Deer Project Leader for Vermont Fish and Wildlife. After all the introductions were made, Murkowski gave an impressive presentation on 2013 Deer and Moose Harvests to kick off the night. Following the harvest reports was a time of commenting by those in the crowd. Those who had comments were asked to state the town they were from (something people rarely remembered to do) and then pose their question. The first question was a zinger; a verbal shot fired right over my right shoulder right at Murkowski.

“Where’r all the does?!” Someone said angrily. Obviously, this was the most sophisticated way to start of the questioning and answering time.(sarcasm) The man dressed in all black and leaning against the wall in the rear of the cafeteria had clearly come looking to pick a fight and didn’t care what the answer was. He questioned Murkowski on whether he was from Vermont or even hunted. From what I gathered both answers were “no” and this only added fuel to the fire for this guy. Eventually, Scott Darling, a wildlife biologist with the state and the gentleman who oversees the Fish and Wildlife Game Program stood up and confronted him, telling him to quiet him down or leave. He did quiet down and only hung around for the first hour. This was good because although there were some comments made by discouraged individuals, the remainder of the meeting was conducted with a manner of respect that made for some productive time together.

Some of the other questions and comments were:

“Why are we shooting bred does?” – West Windsor

“There are too many does.” – Springfield (This comment came shortly after the angry fellas comment. Funny, huh?)

“Where have all the deer gone?” –Springfield (This one came right after the guy concerned about too many does in the same town.)

“Poaching is a big concern.” – Ludlow

“How many deer are there in the state of Vermont?”

“The Coyotes are doing a number on the deer herd. There are Damn few of them! They are gobbling them up to beat the band.” – Andover

Answer: (this is not a quote but my own interpretation of what was said) Coyotes eat deer, they are part of the natural cycle. Bounties do not work and the Harvest reports indicate that the deer population is stable. There are some places in the state where the deer herd is sparse and the coyote population is more dense. You are welcome to hunt them year-round.

“Logging has tanked in the last 6 years. The invasive species are taking over.” – old school logger  and trapper from West Minster. Quite possibly the most informative comment during the time period as it was obvious this man spends a lot of time in the woods.

Answer: Up until this time of year, no. The ticks are currently riding out the winter on the hides of moose and deer and have survived just fine. However, they will be falling off of their hosts in a week or two and if there is still snow on the ground at that point it will help reduce the tick numbers because they have a hard time surviving when landing on the snow.

“How can we change the lottery system for moose permits so those like me can draw a tag and those that have drawn multiple tags in the same timeframe will not be drawn again.”

Answer: We know this is a problem and you are not the first person to express frustration so please be aware we are looking at changing the system to better suit individuals like you who have been putting in for a long time but have not yet drawn a permit.

So that just about summed up the first hour. The second began with Murkowski giving an overview of the big game management plan and then all those left in attendance broke in to small groups to discuss what we heard and give our suggestions to the alternative management strategies outlined in the presentation. Here is an outline of the presentation:

2. Maximize opportunity for hunters to encounter an antlered deer each year regardless of antler characteristics.

2. Shorten the length of archery season

3. Make Season dates and regulations flexible on a WMU basis

5. Move the start of Rifle Season back but maintain the current length

6. Leave the muzzleloader season where it is and maintain its current length.

There are a multitude of topics I could address at length here but suffice to say that a lot of thought has been put in to the positives and negatives of each suggestion. Those positives and negatives were laid out before the crowd and then we broke in to small groups to discuss. Each table was given a piece of paper and pencil and we were asked to record answers to two main questions. At the end of the discussion time each small group had a leader summarize their discussion to the crowd. I’ll state some of the answers I recorded underneath the questions below.

Deer are not spread evenly throughout the state.

VT Fish and Wildlife is against current practices. (remember, this is what the crowd heard, not the official stance of VT F&W)

Not everyone can be pleased.

2. What do you think about the alternative management recommendations suggested? Suggestions…

Go back to the old school tags

In summary, I was very impressed with the evening. If you attended and you did not feel as though VT F&W cares about your opinion you would have to be blind. Clear data and science was the key element to creating a productive atmosphere and it was one that the old time Vermonters in the crowd added to with constructive ideas. It’s also clear F&W is in a tough position and cannot please everyone in the state. Deer hunting is an important tradition in the state of Vermont and I gathered that their goal is to keep that tradition alive the best way possible. If I find the time I’ll expound more on the information presented in the second half of the evening. That was pretty cool stuff and there was MUCH more stated than what I could relay here in the short amount of time I had before heading to work.

I am sure that all the readers are dying to know where I stand on some of these issues. 🙂  What good is an opinion piece without an opinion, right? I would like to see regulations similar to what New Hampshire uses. That is one firearm tag (muzzleloader & Rifle) and that can be used on either sex deer for a certain number of days at the beginning of each season and buck only after that. This seems to satisfy the meat hunters and still allows the younger bucks to grow without focusing on one age group and altering the genetics of the herd. It also keeps it simple. In Vermont we are now seeing older deer with a fewer number of points which is quite possibly a direct result of the APR.  NH seems to have bigger bucks without having to use an antler point restriction.

Archery Season also runs from September 15th through December 15th  NH which offers ample hunting time and the ability to be selective since there is so much time to hunt. I think this would serve Vermonters well, but I’m only one voice in a crowd of many.

Now I’m late for work so unfortunately I need to stop. That’s  a good thing because I probably lost most of you 5 minutes ago anyway. In closing, I would highly suggest that you attend one of the two remaining meetings this week if you have the chance. They are very informative and I felt it was a very productive time. Happy Hunting!