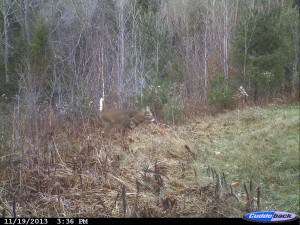 It had come down to this. I had one more chance to hunt and connect with the elusive big fella that had been giving me the slip all year. I felt that I was closing in on him, or at least some of his friends. The week before I had branched out into a new area and found some encouraging deer sign and even managed to see a few – including a spike. So, on the final cold morning, Josh and I took the four-wheeler deep into the woods again and spread out in the area I’d discovered the week before while Dad stayed down low to man the blind.

Josh headed off to overlook the plateau and I about 300 yards to back to the south on the side of a steep hillside. I found two big hemlocks that made for a great place to sit and overlook hardwoods to my right, a pinch point down to my left, and a slight cut in the hillside above me that provided an easier travel route for the deer as they worked their way up to the top of the hill to bed. I spread out my stuff and got settled in shortly after daylight.

There were a couple inches of powdery snow on the ground but the leaves were still crunchy underneath. The snow fell steadily, although lightly, throughout the morning. It was enough so that I had to use a spare glove to cover my scope to keep it from filling with snow. At about 8:30 I blew on my grunt. As is customary on these cold days, it was frozen. When I blew extra hard it sounded like a cross between a laughing hyena and a prepubescent pig. Slightly embarrassed at my lack of skill on display I took it apart and tried to loosen the reed up. I put it back together and got the same result.  Eventually I decided to suck on it backwards and got a noise that resembled a rather feminist sounding young buck. It was a little high for my liking but I’m not the one responding to the calls…

A few minutes later I heard the familiar sound of a deer walking through the leaves. My mind started racing at the thought that I might pull off a last second miracle. Try as a might I could not locate the deer. I knew he was off to my right but it took a few frantic seconds to spot him. He was walking towards me on a logging road that was cut into the steep hillside. I knew he was a buck before getting a look at his head. I mean, what else would respond to a call like that? Unfortunately, he only sported two tall spikes. My heart sank at the sight of those spikes and I mentally shot him twelve times as he stood there looking for the strange creature that had made the noise a few minutes earlier.

He had walked in downwind and became a little uneasy while looking for me. He never ran but instead did the foot stomp routine and eventually walked back the way he came. I lobbed hurtful words in his direction and depression started to overtake my mind. If it hadn’t been for the cold temperatures and the hot chocolate in my thermos I would have just given up right there. Instead, I held out for another couple hours hoping for the best. But it wasn’t meant to be.

At 11 am I was back in my truck and changed into my work clothes. I watched the road as I drove away, but my heart was staring back into the woods wishing it didn’t have to end. But all good things must come to an end, otherwise they wouldn’t be so good. Responsibility was calling and there are only so many times you can let it go to voicemail….until next year of course!