Every year I can’t wait to purchase a particular set of new hunting videos. They are usually released in the doldrums of hunting that happen every year in June. There is nothing to hunt and deer season is still months away but the last videos provided me with over six hours of footage and 91 hunts! That’s an average of one hunt every four minutes which makes for great entertainment. There are plenty of others I would buy if I was a single fella but it’s hard to convince my Better Half that I need more when the ones I have play on a continuous loop anyway. So, I relent and just find free ones to watch online when i get bored with the ones that are on in the background. A whole new world is opened up when I double click on the Google Chrome icon. Semi-live hunting shows that are updated every week throughout the season, endless archives available to watch, and even do-it-yourselfers on YouTube provide hours amounts of entertainment that fill in the gaps of the other continual hours of entertainment. The best part is, even when hunting season finally rolls around I can fill in the boredom that often overtakes me while sitting on stand with the success of others right from my smart phone. 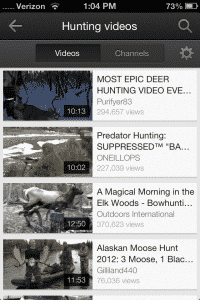 But is this a good thing? Is it good that we can go to the woods and stare at a computer? Is it good that we have hours and hours of big bucks to watch everywhere we turn? Well … yeah, kinda! Big Bucks are awesome and if I’m not seeing them in the woods I might as well see them somewhere else. But I would also contend that it has a negative side as well and one of the unintended consequences of the hunting industry as we know it today is that it feeds our human desire for instant gratification. If we don’t get it from thing A, we find thing B that will provide it.

Across the country we are seeing a decline in hunter license sales. This can be do it part to many reasons. Perhaps it’s because hunting used to be done out of need and now that it’s easier to walk down the aisle of a local grocery store and buy 5 pounds worth of meat, hunting is not worth the effort. Maybe it’s because people are fed up with loss of available land to hunt so they throw their hands in the air and give up trying. It’s possible that hunting is dying out along with the aging demographic that used to be its mainstay. Maybe it’s too expensive? Maybe there is not enough opportunity? Maybe people are just too busy with something else? I have a feeling that every one of those reasons plays some role but one that is rarely discussed is the unintended consequences of instant gratification.

Don’t get me wrong, I’m not saying that instant gratification is wrong but what I am saying is that if it’s handled poorly, or we give in to it too often, then it could be and we will have to deal with the consequences. When it comes to hunting entertainment, one of those consequences is that in this region of the country especially, we are having a hard time recruiting new hunters. Specifically kids. Who can blame them? Like us, they are surrounded on every side by options to fulfill their desires and if one does not keep them entertained they just move on to the next one. I love hunting videos but unfortunately it’s not the real world. I’m not knocking them (I said earlier that I watch them all the time) but they do not portray what hunting really is like for the majority of us. The videos are fast paced, real hunting is not.

Last year I saw 3 entire deer and parts of 2 other deer over three weeks of hunting in the Green Mountains of Vermont. The statewide average is only 2.4 deer for every 10 hours in the woods. It was a little better in New Hampshire. My uncle told me that in the 1980s he hunted in NH and went for years without seeing a single deer, and he got out quite often. I could be wrong, but my perception of the next generation of potential new hunters is that for them, the return on investment of this type of endeavor is not high enough to lure them from their digital world into the real world where the pursuit of Big Buck used to be the ONLY thing a teen-aged boy like me (or my uncle) thought about from June to December. Yes, there were girls then too, but, given the choice between a date with them or a date with Big Buck, the competition wasn’t fair.

It would be unfair to place blame on the hunting industry for this unintended consequence. I doubt that it is the success of companies, punctuated by the sales of hunting videos and shows that discourage the next generation because we have seen their popularity rise dramatically. But the digital age has taken a byte out of hunting, for sure, by creating the impression that all those things they can view or listen to are real.

Did you know that you can subscribe to receive email updates whenever I get around to writing another post? On days when a new blog is posted you will receive an email at 2 pm to let you know, otherwise you won’t ever receive another email from The4Pointer. The signup form is on the right side of the site just under the Facebook and Twitter logo’s. Thank you!