Today on the blog I highlight a poem called “Track Soup” that my uncle Dave Biebel wrote a number of years ago. It’s an all too familiar story for most of us. Thankfully, I will not have to eat any track soup this year since I already have one in the freezer, but I’ve had to eat some before. It doesn’t taste good! Enjoy…. 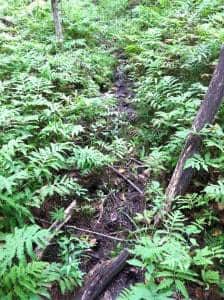 “What’d ya see?” inquires the Gramp

As the Boys come into camp.

They settle down around the fire

To see which one’s the biggest liar,

Telling tales ’til half past when,

Then up at dawn and out again.

So, wolfing down some eggs and toast,

The men rush out into their posts.

But “skunked again” they mutter when

They wander in at lunch again.

But we see neither hide nor hair.”

“First you take a pound of spoof

And stir in one filet of hoof…

Buck lure and a pinch of laughter,

A piece of antler mixes well…

Some apples and a big salt block,

But mostly just a lot of talk.”

“And, for dessert,” he winks his eye,

“A generous piece of humble pie!”