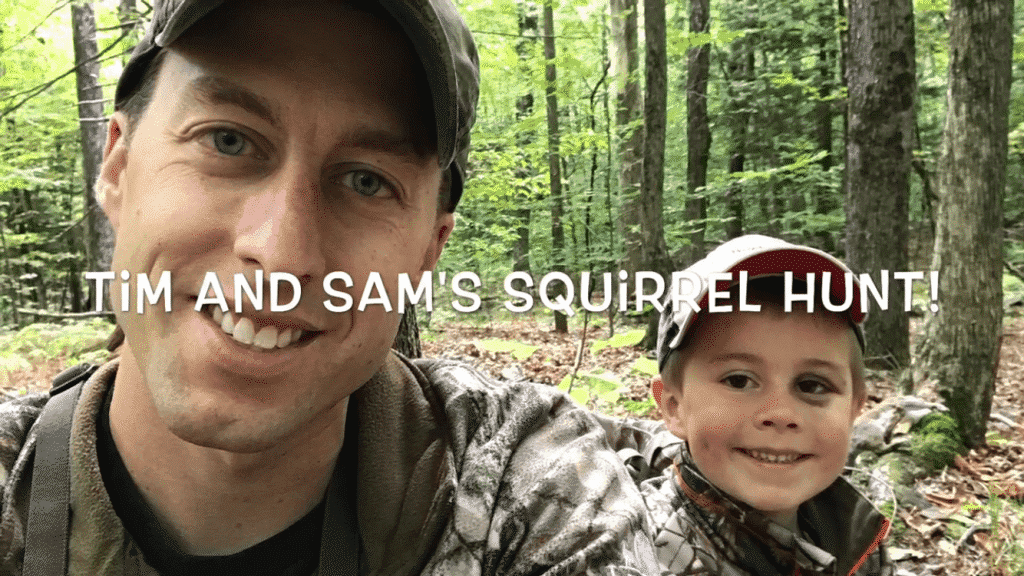 Saturday was a great day. Sam and I had been looking forward to our squirrel hunt for a long time and we were finally able to go. His new camo sweatshirt had arrived in the mail only days before adding to the anticipation of our great hunt.

Always the realist (pessimist), I was convinced we would come home empty handed. I’d been seeing a lot of squirrels each time I’d been out deer hunting, but trying to convince a 5-year-old to keep quiet long enough for a squirrel to show its face seemed like a long shot. But my main goal was to have a good time, squirrel or not squirrel.

We hadn’t been situated for five minutes when I noticed movement to my left. A big gray squirrel was climbing a tree about ten yards away and unaware of our presence. I got Sam’s attention and watched his eyes widen with excitement when he saw it. I couldn’t get a bead on the squirrel before it disappeared into the treetops, which only added to the excitement while we waited for it to reappear. Eventually, we saw it again as it made its way down the branches of a large oak and onto the main trunk of the tree. When it paused in full view, I let him have it. The squirrel fell to the ground with a thud and we had our first squirrel together. I couldn’t believe it!

An hour later Sam picked out another location for us to sit. It wasn’t a great spot, but it was his choice so we settled in. I was in the middle of asking him something when his eyes widened again and he pointed to something. I looked up and to my amazement a gray squirrel was sitting on the ground right in front of us. I hadn’t even loaded my gun yet! I put a shell in and shot it as it started to run away. Now we had two squirrels in the bag!

Sam talked about our hunt for a long time and can’t wait to go again. I feel the same way! It was such a great afternoon in the woods together. That fact that we were able to bring a few squirrels home was just the icing on the cake.

I took some time to stitch together a few videos if you’d like to watch. Now that you know a bit of the backstory it might make a little more sense. Enjoy!

Thanks for following along with our squirrel hunt. As Sam said, “Now it’s time to eat them!”

Isn’t hunting squirrels with a shotgun cheating? Where’s your .22?

Not when you are hunting with a 5 year old!

Next year, get him a VT mentored license and he can be the shooter, with some practice. You’re a great dad !

He can’t wait to shoot one for himself!

Sometime I’ll have to share with you about a squirrel hunt I was on with two friends.