The Spike Rule: Is it Working?

In 2005, the Vermont “spike rule” was passed as part of an effort to spare yearling bucks in order to shift the buck population from one dominated by yearlings to one with a higher proportion of older aged bucks (3.5 years). After nine years it’s time to study the numbers to see if it’s working. Today, I am playing devil’s advocate to challenge my own initial positive feelings about spike rule. To get started I’ll single out one chart that was published in the 2012 Vermont Whitetail Deer Harvest Report and provide some devils advocate style analysis. Here it goes… 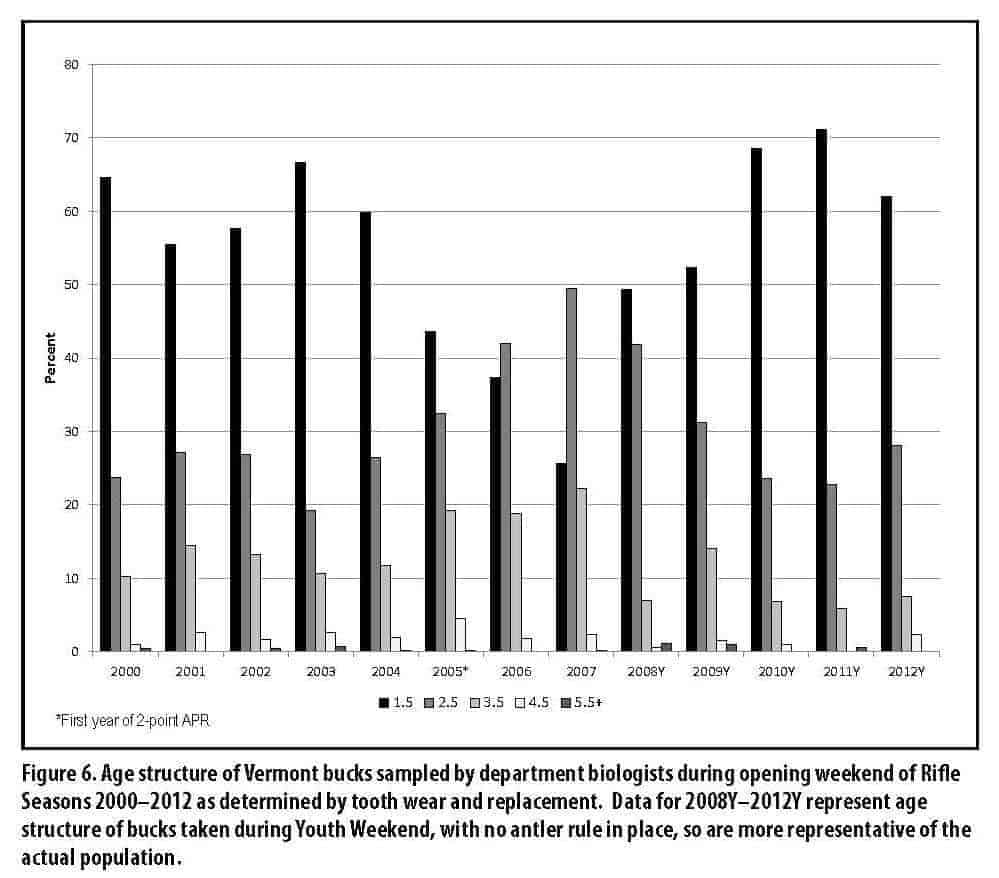 This chart needs a little explanation before understanding my interpretation because the data in this chart was collected during three distinct time periods. First, between 2000 and 2004 the data was collected during rifle seasons when there was no antler restriction (AR) in place. Second, from 2005 through 2007 the data collected was from rifle hunters but it was after the AR was put in place so it is not the best representation of the age structure of the buck population. Because of the AR, much fewer yearlings make up the sample size since they were not legal to shoot. Third, during the years 2008 through 2012 the data was collected from bucks taken during youth season because there were no restrictions on what they could shoot. As a result, it’s assumed that the samples would be more representative of the actual buck population.

Two major points of interest jump out at me from this chart.

1. There has been very little change in the age structure of Vermont Bucks when the 2000 harvest is compared to the 2012 harvest. If I am to base all my conclusions on this one chart I would have to say that there is not enough solid evidence to support any claim that the age structure has shifted. 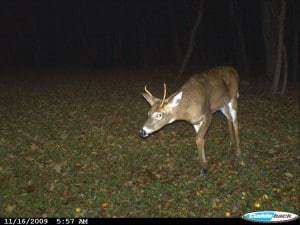 When I look at a three year average comparison the numbers look even less compelling.

Certainly an argument could be made that youth hunters do not kill as many older bucks as more experienced hunters, but even when taking that into account it’s still a hard argument to say that the population has shifted towards one comprised of older bucks. 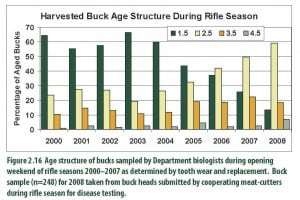 2.  The data collected during the years 2005-2007 is concerning. At first glance it looks good, right? Fewer yearling bucks were being shot every year. Not so fast. When I look at that chart I interpret it to say that there are now fewer yearling bucks with more than two points on a side. In 2005, (the first APR season) 44% of the bucks harvested were yearlings. This indicates that when the APR was put in place there were a large percentage of yearling bucks with at least 2 points on a side (i.e. – better genetics). By 2007, only 26% of the bucks were yearlings indicating that there were fewer legal yearling bucks available for harvest. This downward trend continued in 2008 (14%) which can be seen in the chart titled “Harvested Buck Age Structure During Rifle Season” found in Vermont’s Big Game Management Plan 2010-2020. Quite simply, the genetic makeup of Vermont bucks is being steered towards one that has fewer points. This was confirmed earlier this spring at the Public Deer Forum in Springfield, VT when Adam Murkowski, State Deer Biologist, commented that of the older bucks now being harvested a higher percentage have fewer points than in years past.

In Summary, I concluded the following based on this one chart:

My gut tells me that the Vermont hunters who originally approached VT Fish and Wildlife to lobby for protection of younger bucks had hoped to hunt older deer with better racks, not just older deer. If that was truly the case then according to this data it doesn’t appear that either of these two goals are being met. In fact, we may be headed down a path marked with poor genetics that will take a long time to correct if we continue on the current course.

On the other hand…a lot of people I talk to tell me the antler restriction is working great. They say there are more older deer now and the racks bigger than ever. Hmmm, that sounds like a great idea for another post some other day. Stay tuned. 🙂