The Key Ingredient to Filling Your Tag 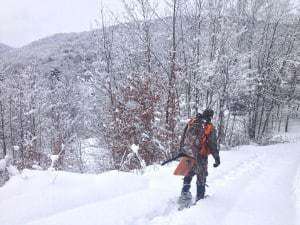 I’m starting to question my manhood. Taylor Swift is constantly on repeat and I’m in my PJ’s by dinner each night. I’ve resorted to shooting at miniature deer with Nerf guns and I’ve discovered that I’m a horrible shot. I’m about to go crazy. This cabin fever business is for the birds! It’s clear I have too much time on my hands. Go away, Winter!

Last fall I was dealing with some of the same problems (minus the PJ’s and Nerf Gun). Since the beginning of archery I’d been in the tree eight times and I’d sat seven hunts in a row without seeing a thing! There was so much food on the ground that the deer were impossible to pattern. In all my years of hunting I had never seen such an abundance of food. Apple trees strained under the weight of apples and walking under an oak tree was akin to a hard hat only area thanks to the constant rain of acorns. I was putting in plenty of time but had zero to show for it. I was growing impatient with each hunt and about to go crazy.

My increasing impatience is a direct result of the world we live in. It’s filled with how-to articles informing us of ways increase our odds of success on Mr. Buck and we have access to hours of action filled hunting shows at the touch of a button. It’s a recipe for impatience and one we mix up every day.  We live in a fast paced world and throw our hands up in disgust when we come up empty after a hunt. How can this be?!?!

So what is the answer?  The answer is “Time”. Hunting takes time. Tagging a deer takes time. In a world that thrives on instant gratification that can be a hard pill to swallow, but if you are a deer hunter you better get used to it.  Use that time to better yourself as a hunter and be patient. Momentum can change in an instant. Not long after my eighth hunt my luck started to change. In total, I put four deer in the freezer this year between Vermont and New Hampshire; a personal best. Some of this was due to luck – just being in the right place at the right time, and some was due to a little bit of skill (or so I’d like to think). Whether my success was a result of luck or skill it all came down to the amount of time spent in the woods. If you don’t put in the time don’t expect to consistently fill tags.