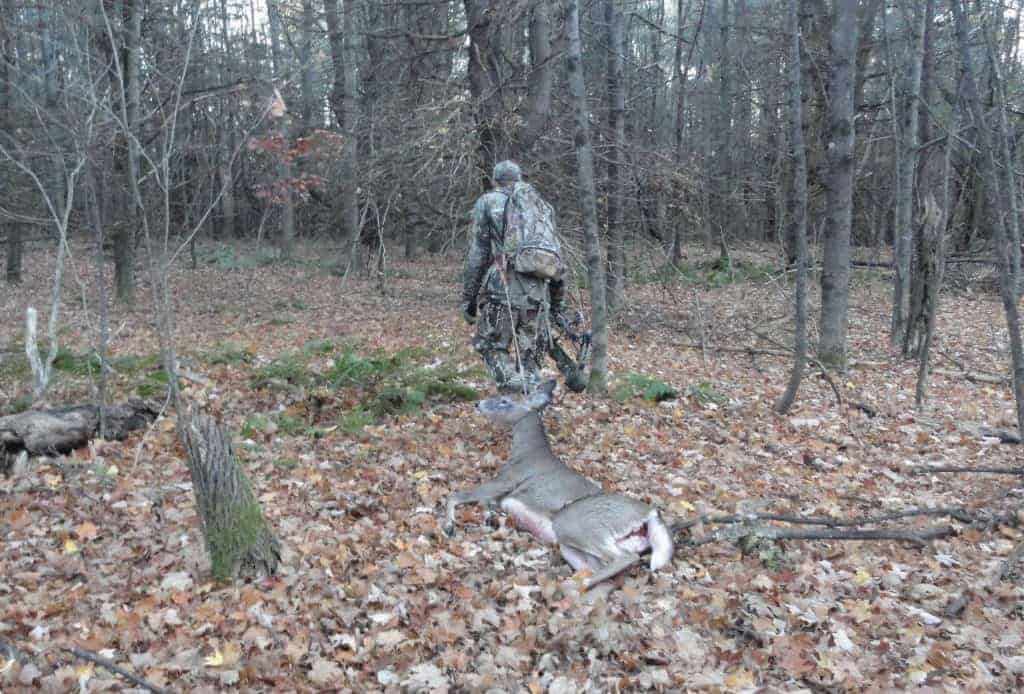 There are few things in life that can insert turmoil into your relationship with your spouse like calling to inform her that you just shot a deer and you’ll be home late. I’ve been there. I have a knack for shooting deer at a bad time – either she isn’t feeling well or our young son won’t sleep. Needless to say, the last thing that sweet voice on the other end of the phone wants to hear is my voice recounting the excitement of the hunt. I guess from her perspective it makes sense, but from my viewpoint there is no sense in getting her upset because there is work to be done.

I’ve learned over the years that the best thing a guy can do in a situation like this is communicate as best as possible. One drawback to shooting a deer with a bow is that a fair bit of time can pass from when the arrow is released until the deer is located. Once located it still has to be dragged out of the woods. This can make it difficult to communicate effectively. How do I know when I’ll be home? It’s an educated guess at best.

This brings me to my latest invention idea. I’m fairly sure that if I wasn’t about to share this with you I’d be able to retire at an early age, but like most of my ideas this one is destined to die unless I get it out on paper before the critical juncture that comes when knowledge must take over from inspiration. I lack the knowledge necessary to pull this off, so if you know how consider this my gift to you.

I need an app on my phone that will tell me how long it will take to drag out my deer. I’d call it “The Drag App.” I can see a million uses for this, the most important being able to tell my wife exactly when I’ll be home from dragging out a deer. The App will calculate an estimated time of arrival back at the truck based on the size of the deer and a few basic questions. After it’s done calculating, it will text my wife directly and she’ll know when I’ll be home before I will.

The App works like this: First, it needs to know the approximate weight of the deer which it will calculate when you take a picture of it. A reference object is needed so place a hat, backpack, or some other common object on the deer the app can use to accurately weigh the deer. Second, once it knows the weight the app will ask you a few basic questions to finish calculating.

1. Are you alone?
a. Yes (The Drag App will calculate drag based on your weight, which you will have already entered, then take you to question 8.)
b. No, Thank God! (Answer question 2.)

2. How many people are with you? (It’s assumed that the people with you are planning to help drag so don’t enter anyone’s names that aren’t going to help. If you do, they’ll want a share of the meat.)

3. Are the helpers expecting a share of the meat?
a. Not Likely.
b. Possible.
c. Highly Likely. (It’s been proven that energy levels expended by the shooter are reduced proportionate to the amount of meat a helper thinks he or she deserves. Although there may be two or three helping drag, it doesn’t mean that all involved are putting forth 100% effort. This will make the drag take longer than expected and The Drag App needs to know the truth in order to accurately calculate the ETA.)
d. I plan on giving them some even if they don’t ask. (Choosing this answer will result in the app computing 100% of your effort, for whatever that’s worth.)

4. What is the combined weight of the helpers?

8. When is the last time you exercised?
a. The last time I dragged out a deer
b. High School gym class
c. Within the last week
d. Stay out of my personal life

10. What is the terrain like?
a. Mountainous
b. Swampy
c. Rocky
d. Forested
e. New England (all of the above)

11. Is there anything to be afraid of?
a. Predators
b. The Dark
c. The Helpers
d. All of the above

13. Did you remember your knife?
a. Yes, but it is not sharp
b. Yes, and it is sharp
c. No
d. No, but one of the helpers remembered his. (This may sound like overkill but if this answer is chosen it will speak to the practicality and work ethic of the helper which in theory should shorten the drag time.)

After answering the questions The Drag App will display the estimated time of arrival and also send an automatic text to you wife. The text will include the picture (to get her excited), a short message, and a dozen roses (it will connect automatically to the local florist shop).

One night last year I could have used The Drag App. I’d hit a doe earlier that afternoon but unfortunately my bow limb had hit the tree I was in upon release of the arrow and it resulted in a poor hit. (Read the story here.) It was a Friday night and my wife, who understands the responsibility that comes after the shot, was still disappointed to hear I’d be out all evening. We (me, my dad, and our friend Carl) recovered the deer around 9 pm at the bottom of the opposite side of the hill from the trucks just as the snow began to steadily fall. The drag was going to be tough and I had no idea what time I’d return home. The Drag App would have been perfect.

I’d have snapped a picture of the doe right away…”113 lbs” The Drag App would compute. Next I’d answer the questions.

1. Are you alone? Answer: B
2. How many people are with you? Answer: 2
3. Are the helpers expecting a share of the meat? Answer: D, No, but I plan on giving them some.
4. What is the combined weight of the helpers? Answer: ________. (Note: Since the actual helpers are identified by name in this example I will refrain from entering personal information because I would like their help again in the future if needed.)
5. Are the helpers in good shape? Answer: Unsure (See special note in previous sentence.)
6. Do the helpers have a rope? Answer: A, Yes.
7. Do you like them? Answer: Yes.
8. When is the last time you exercised? Answer: A, the last time I dragged out a deer.
9. What are the ground conditions? Answer: B, Snow.
10. What is the terrain like? Answer: E, New England
11. Is there anything to be scared of? Answer: D, all of the above.
12. Do you have a rope? Answer: A, Yes.
13. Did you remember a knife? Answer: A, Yes, but it is not sharp.
14. How mad is your wife? Answer: B, slightly

Once completed the Drag App will compute the variables and display the ETA back at the truck.

It will also send an automatic text message to my wife that would read something like this:

Your loving husband just found his 113 pound doe in a swamp at the bottom of the hill. He should be back to the truck by 11:45 pm and home by 12:10 a.m. He will be exhausted and wet after tirelessly working with his friends to replenish the venison levels in your freezer. He will return smelling and looking manly. As always, he promises to take off the bloody, tick covered clothes outside in order to keep the house as clean and disease free as possible. He also promises to shower before getting in bed and wants you to know he will work as hard as he can to be home as soon as possible because he loves you so much.

P.S. There are a dozen roses by the front door.

Receiving this message will eliminate the need for her to worry about your whereabouts until after your ETA and provide clear and effective communication. But wait a minute? Why will the app predict two separate arrival times? Easy. The one it tells you is the real time; the one it tells her is fake. That way when you return home an hour early she’ll know she is that much more important to you. I’ve learned over the years how important good communication is, especially with your spouse. I’ve also learned that good communication doesn’t necessarily involve 100% of the truth.

Don’t worry, I let my wife read this before posting it. She is an incredible wife and said she knew it was all in good fun…then pointed to the the shed and told me to get out.  🙂