Squirrel Hunting & The Difference Between Seeing and Noticing 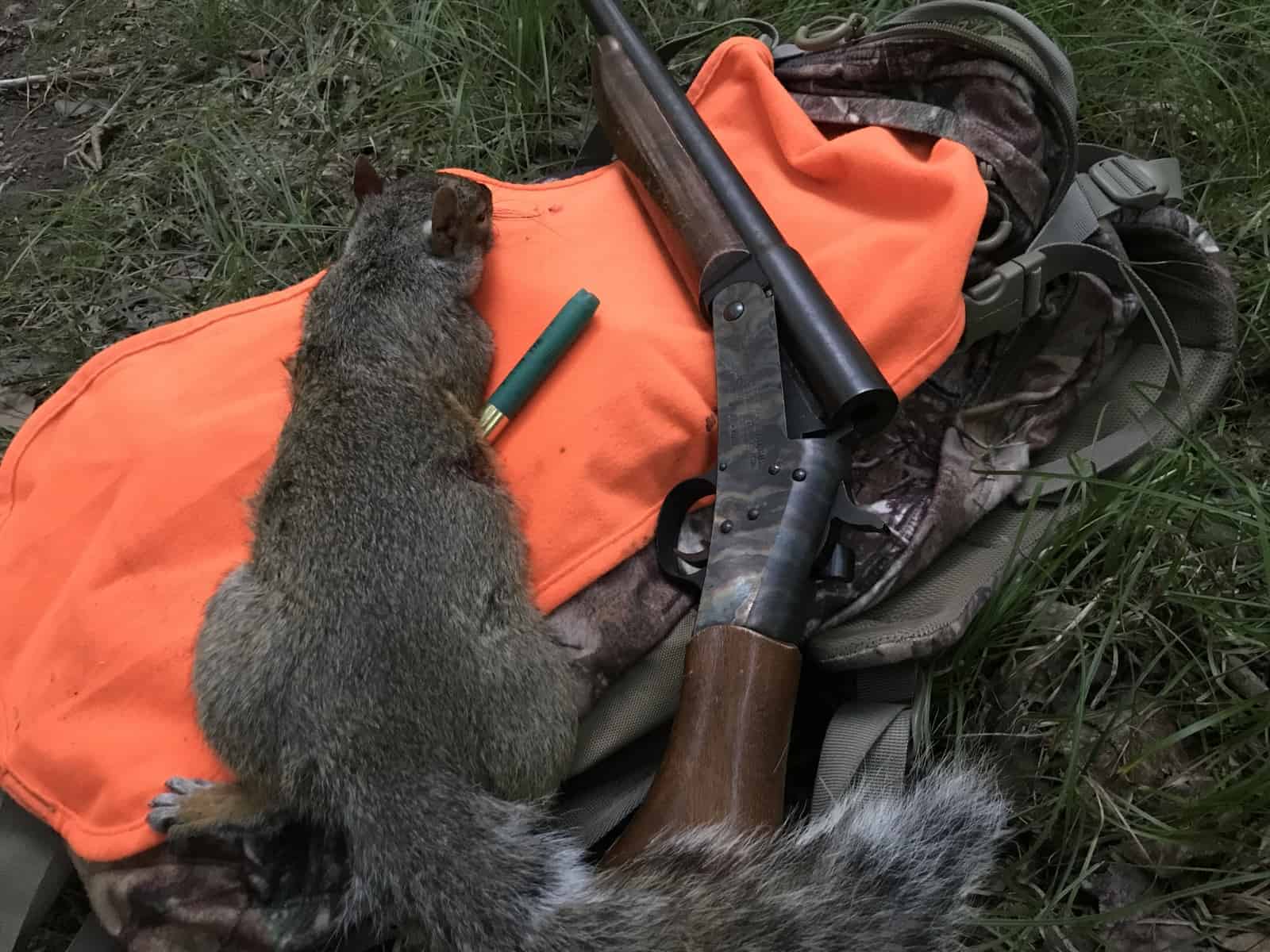 Another summer has come and gone and with it the satisfaction of checking off some summer goals and the disappointment of not checking off some others. My summer was as busy as I can ever recall. Work has sucked up a lot of my time, eleven-month-old Oliver has put a serious dent in my blog writing time, and house projects I’ve been putting off for years and years took up what was left. We did manage to slip in a family vacation, so I don’t have any complaints there. As far as my time in the woods goes, I haven’t set foot in it since I shot my second turkey at the end of May. It’s depressing to think about.

But fall is upon us and last Saturday marked the opener for a couple of game seasons in Vermont. Over the last couple of years, I’ve grown to really enjoy squirrel season, mostly because they can be short hunts and Sam and I both get enjoyment out of them. Small game hunting is underrated that way, especially when looked at through the lens of hunter recruitment. In states like Vermont where big game animal sightings can be sparse, squirrel hunts are just the opposite and typically provide action on every hunt. They are plentiful and good to eat. It’s the perfect combination for the young hunter and the seasoned one.

Sam had been excited to go since I told him September 1st was the opener. We finally found some time in the evening to sneak away long enough for a quick hunt. Our camo clothes had been thoroughly soaked with Sawyers Permethrin the day before in anticipation. We were ready.

Up the hill we climbed. At first, we only saw an occasional red running around and chattering at us and I was worried we be blanked. Eventually, we stumbled across a lone oak and parked ourselves about fifteen yards from it at the base of a couple hemlocks. On the hike up the hill I had whispered to Sam that on our hunts this year I wanted him to notice three things on each hunt and tell me about them after. He was a little confused as to what I was asking, so while we waited for a gray to show up we discussed the difference between seeing and noticing.

“What do you notice around us right now?” I asked him.

“An oak tree?” he said after a long pause, unsure of what I was after.

“Kinda. But I would say that you saw the oak tree, you didn’t notice it. Almost every hunter that walks through here would see that oak, but very few would take the time to notice it. Make sense?” I replied. There was a long pause again, so I continued. “Let me try to explain it a different way. Mommy sometimes asks me if I noticed that the trash needed to be taken out, right? I see the trash every day but noticing that it needs to be taken outside is slightly different. And how about our yard? I’m always two weeks late in noticing that it needs to be mowed, but I see it every day.” I told myself that I’d teach him that trick once he gets older if he didn’t learn it on his own. He’s fairly intuitive. 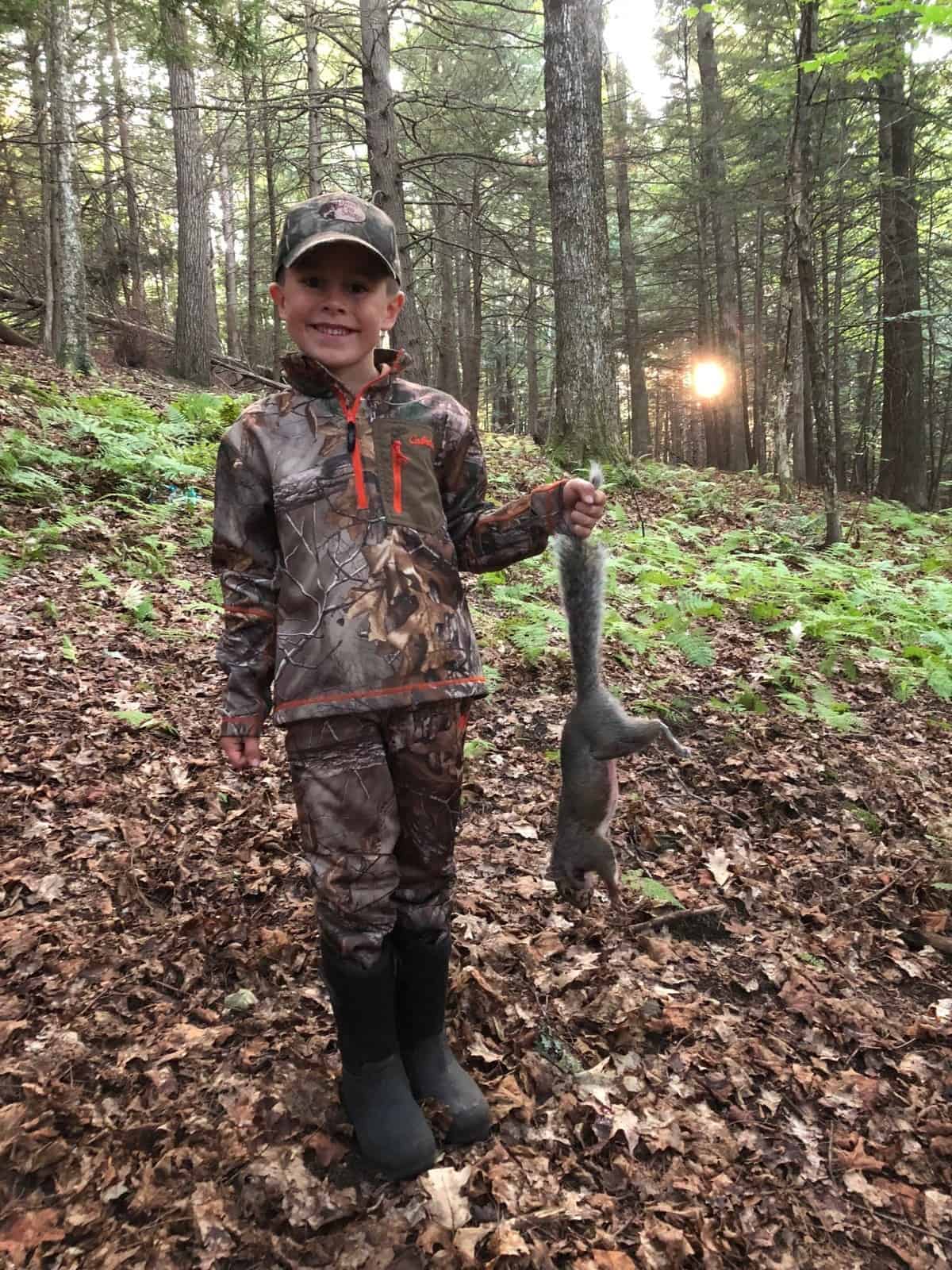 “Ok, so try again. Now that you’ve seen the oak tree, what do you notice about it?” I asked.

After staring at it for a few minutes he said, “It doesn’t have any branches until way up high.”

“Very good!” I said. “That’s the difference in seeing and noticing.”

Our discussion came to a halt when we both heard the sound of a small critter working the top of the oak tree for acorns. As the cracked shells and whole nuts fell through the branches to the ground, I knew we were about to have a shot at our first gray of the year.

We both spotted it at the same time as it came into view while working its way down the trunk of the mighty oak. The squirrel wasn’t nervous, so I was in no rush to take the shot. It stopped on the side of the trunk, but from my position it was covered by some hemlock branches halfway between us.

Suddenly, a deer blew about twenty yards away and bounded out of sight. Sam and I had been so intent on the squirrel that neither one of us noticed the deer come into view. It wasn’t totally our fault as the path the deer had taken when en route to the mighty oak was mostly shielded by a knoll. Evidently, it had seen us pointing and whispering to each other about the squirrel once its head poked over the top of the knoll.

Once the deer left, our attention turned back to the squirrel. It had calmed down after the ruckus from the deer and continued its descent down the tree trunk. When it reached the ground I pulled the trigger on my trusty .410. Then I reloaded at pulled the trigger again. What can I say? It’s early in the season and my trigger finger, eyes, and bead sight aren’t working as a team yet. Plus, I wouldn’t want to set the bar too high for Sam so early in his hunting career. Better to set it low and improve than vice-versa.

After killing the squirrel, Sam started noticing everything – a true testament to my teaching abilities. He noticed so much stuff that it took us thirty minutes to walk 200 yards back to the truck. He noticed mushrooms of various colors, deer tracks, acorns, hickory nuts, and lots of other stuff that was unidentifiable for adults who have lost the imagination of a child. That’s all good and everything, but he always lags about ten yards behind me, and that meant I had to hike back up the hill every time he noticed something since it was a downhill hike to the truck.

“You aren’t seeing the big picture here. Have you noticed my stomach growling?” I asked finally. “It’s time for dinner. Let’s go home.”

“Ok.” Thirty seconds hadn’t passed after reaching an agreement to walk at a fast pace when he noticed something else. “Check out this leaf!”

“Enough noticing stuff! I’ll eat your granola bar if you don’t pick up the pace.”  He understood that. Sometimes you must be tough when mentoring, I’ve noticed.

Thanks for sticking with me after such a long break! I hope you have much success in the woods this fall!