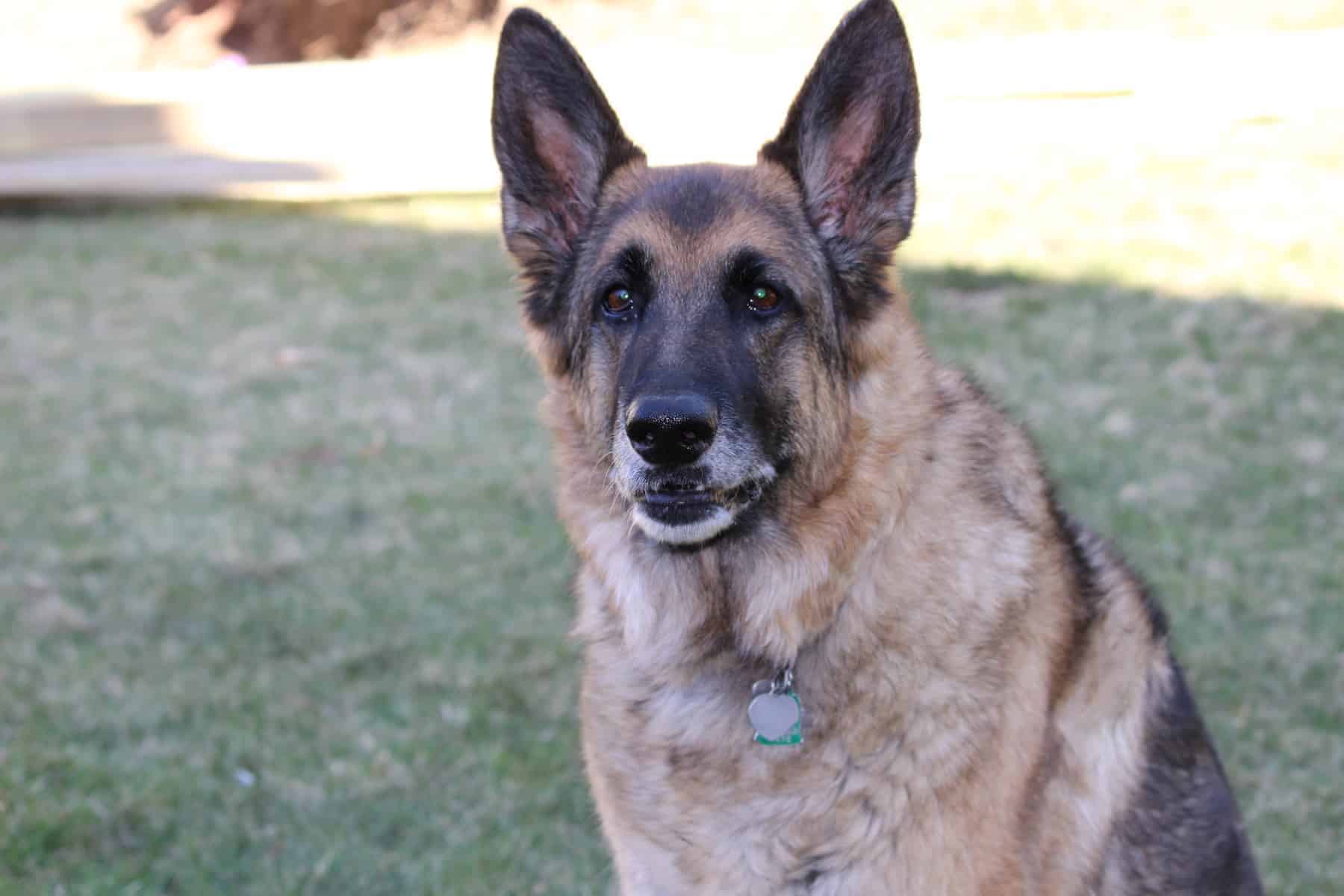 If there was one way to describe Rayna the best, it would be that her presence was always felt. If I was clearing snow from the driveway, she was there catching it as it shot from the snow blower. If I was mowing the lawn, she would drop a rock right in my path and force me to stop the mower. If Steph and I tried to watch a movie, she would sit in front of the TV and block our view. If I forgot to latch the bathroom door while doing my business, she would push her way in and expect a good head scratching while I was unavoidably detained. If she’d been able to talk, she’d have been an introvert’s nightmare.

My wife and I got her one year into our marriage at a time when we needed something to bring us joy. Most of her life she did just that, but I’d be lying if I said the last six to nine months of her life weren’t challenging for our relationship as her health slowly deteriorated. Her stamina weakened and she could no longer join us on the long walks we used to enjoy together as a family. Her messes became more frustrating to clean each time they happened and the vet bills began to mount. More than once I commented that I didn’t want another dog again for a long time. But as is common with most deaths, the negatives about an individual are quickly forgotten and the positives continue to live on. It’s funny how that happens.

Rayna was loyal. We could trust her with Sam and to always stay close by. She never once ran away that I can recall. She was a homebody. She liked being with us and I loved that about her personality. It also drove me nuts at times because she was constantly shedding and her breath was hot and smelled nasty. A breath mint and some lessons in respecting personal space would have been helpful.

She loved sticks and rocks and would play with a single stone for hours on end. Once, when I was building our house, she played with the same rock for eight hours straight. At the end of the day, there was a thirty-foot-long trench in the dirt that was a foot deep. She would drop the stone at one end, fling it and dirt between her legs and repeat. All day long. That was Rayna – easily entertained and not one to leave. I think she got that quality from me.

There were only a few times in her life I considered calling her elegant. Otherwise, clumsy and unobservant were better terms. As an example of her clumsiness, she never mastered walking forward across a hard surface floor. There was some kind of mental block in her head in that regard. She would hug tight to walls until reaching a more open part of a room, then she would spin around walk backward. Upon reaching her destination, she’d spin back to a forward-facing position and carry on as though it was normal. It was not normal, but she was always that way.

She wasn’t very observant, either. I opened the door to let her out one morning and there happened to be a doe and two fawns standing not more than sixty feet away at the end of our driveway. She never noticed even as I tried to point them out to her. Birds were a different story. She hated birds – particularly crows. To my amazement, my wife called me when I was at work one day to tell me that Rayna had sunk her teeth into a crow. A crow?! One of the wariest birds around?! I was in shock and proud at the same time, though I felt bad for the crow. Any time she spotted a crow in the yard she’d run at it stomping both feet into the ground at the same time and hair on end. It wasn’t a very effective approach at catching them, but she must have felt like it made her look scarier to those dangerous birds.

She also killed a blue jay once. To this day I still have no idea how she did that or how she managed to catch up to that crow, but deep down I was kinda proud to know she wasn’t totally out of touch with her surroundings.

Her last night was particularly rough and we knew she needed to see the vet again. I had a feeling it would be our last trip there together when I called to schedule the appointment. Steph and Sam happened to be home so we went together as a family. Even though I sounded confident to them that we may have to say good bye, I still wasn’t fully convinced on the inside. Even though her health had been deteriorating it all seemed so sudden. Just a week prior I had been so frustrated with her health issues, that I said I was ready for her “time to come.” Now that it was real I wasn’t.

From the time the vet first walked into the exam room, it was obvious to me that my intuition was right. Rayna was sick beyond what we could help her recover from. Steph asked the vet many questions and the decision about what to do became more and more obvious with each answer. We all had a hard time holding it together as Rayna stood quietly in front of us, clearly in pain.

When the vet left the room and I turned to Sam and said through a broken voice, “It’s time to say goodbye, Buddy.” He was beginning to grasp the finality of the moment and so was I. It was hard for any of us to fully grasp because only a few days before she was her normal self. She made it for a walk around the neighborhood and was chasing rocks and sticks like normal. How could today be her last day?

Steph and Sam said goodbye one last time and left me in the room with her alone while I waited for the vet to return with the concoction that would end her life. I hugged her face and my tears wetted her hair I’d so often despised cleaning from the house and off my clothes. I reached for my phone and took one last selfie with her. She always hated selfies. As much as she liked to be with us, she despised each time we tried to hold her tight to take a family selfie. The records prove it. 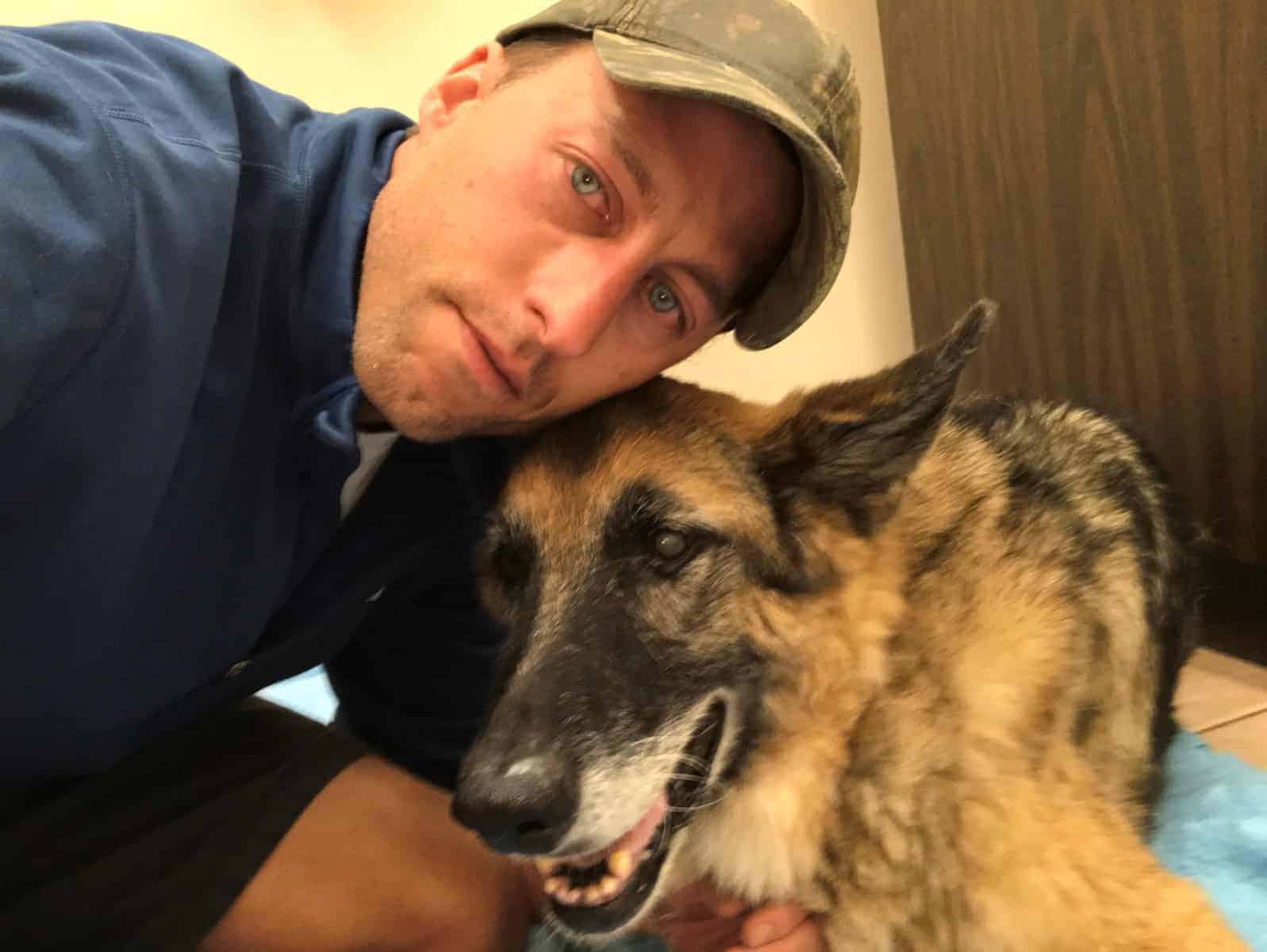 I told her she was a good girl over and over, the guilt over our decision starting to weigh on me even though there was no doubt it was the right one. I held her head in my hands and whispered one last tearful goodbye as her heart stopped beating. She had been a great dog and family member despite her oddities and health challenges near the end. We buried her at home a few hours later and thanked God for the joy she’d brought us throughout her life.

It’s already strange without her. I keep shutting the door between the house and the mudroom to contain her each time I leave the house. When I return at the end of the day, I expect her nose to be poking through the crack in the door when I unlock it. I instinctively reach for the vacuum cleaner to vacuum her hair each time I pass by it, but that’s no longer needed either. I’m fairly certain I heard it breathe a sigh of relief when we returned home from the vet with tears in our eyes.

In the weeks since that fateful day, we’ve enjoyed reminiscing about all the good times we had with her. We’ve looked through old photos of times we had with her before Sam joined our family. Times like hikes, swimming, boat rides, movies of her walking in reverse across the floor and much more. She was there when we brought Sam home after he was born and she was there for hugs when we were dealing with the loss of Cora. She was a great companion and we made many great memories with her. She’s already missed very much, except for the hot stinky breath and excessive amounts of hair. It feels so strange without her. Goodbye, sweet girl.

Puppies don’t shed, do they?

It’s difficult to accurately judge a trail camera photo of a buck through tearful eyes, but as soon as mine dry out I’ll share a few photos I’ve gotten recently. 16 days to go until the NH Archery opener!

Great story about Rayna, Tim! It brought back many memories for me, and I will miss her when I come to visit! She was a special dog! I’m so sorry for your loss! 🙁