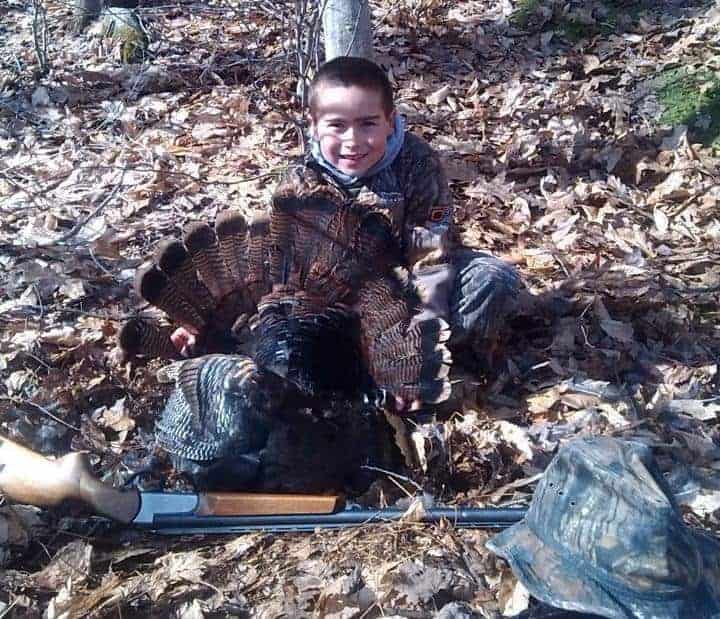 The night before youth turkey season was almost sleepless for me.  I was filled with anticipation for what tomorrow’s hunt would bring.  It reminded me of the night before deer season as a kid, waiting for the morning, too excited to sleep but so over tired that it finally overtook me. I get more excited to see my kids on a hunt than I do to hunt myself.   This year would be my son’s second youth turkey hunt and we had a good spot picked out.  I closed my eyes and the alarm went off…

After a quick breakfast, we jumped in the truck and headed to a small piece of woods that holds a lot of turkeys.  It’s a lone hill, the top of which is covered in tall hemlocks where they like to roost.  We were setting up at the bottom of the ridge close to some water where they typically head after flying down.  All settled in, I hooted with my owl locator call.    A pile of turkeys gobbled and shattered the morning darkness…..but…..there was a problem…. The turkeys were on the opposite ridge, across the street on unposted land, but not land that my son had requested permission to hunt.  So we spent the next hour having a conversation with turkeys we would never see. It was like a car salesman trying to sell something to a customer who had no intention of buying.

After an hour of trying to call these turkeys away from the hens, downhill and across a road, we went home and hatched a plan.  There had been a flock hanging around behind the house every morning and we decided to make a move on these guys.  So, we snuck up the ridge behind our house up to the top and began to walk and call our way down.  We saw lots of turkey sign and stopped to collect a shelf fungus for my son.  Before we moved on, I hit my slate call and a turkey fired up 200 yards below us.   We quickly and quietly moved in about 75 yards closer and set up a hen decoy off to our left.  Nestled in the crook of a large, fallen maple, we had a great field of view down the ridge.  I called again….nothing.   I instantly thought we had moved too close and had spooked him.  But I called a few more times making my yelping sound more and more desperate. Finally, he gobbled right on top of us.

Moments later, we saw his deep red head bobbing as he came up onto the shelf we were overlooking.  He instantly spied the decoy and began to send vibes to the plastic lady.   He didn’t take his eye off her as he closed within 50 yards.  Noah had his single shot 20 gauge with a 3″ turkey load already up and in position on his shooting stick.  He was calm, cool and collected as I began to tremble as if I had 150 class whitetail in my sights.

I whispered, “Do you have him in your sights?”

“Yup,” Noah hissed back to me.

Finally, the gobbler was 25 yards away and coming right at us.  He stuck his neck up for the final time and…. In an instant the bird was down, the gun was leaning on a tree and Noah was leaping off the log hooting, ” I GOT HIM!”   We scrambled down the bank to find a nice little jake.  At that moment in the woods, time stopped.  It didn’t matter that life is hectic and filled with trials and difficulties.  It didn’t matter that in an hour, 25 guests were arriving for my youngest son’s birthday party and we were in the woods….not home getting ready.   This was the moment where the only thing you can do is marvel at creation and give thanks as father and son to the one who created this turkey and gave us breath to enjoy this hunt together.   I watched my son beam his smile at this success and I found myself enjoying this more than getting a bird myself and looking forward to the next time.