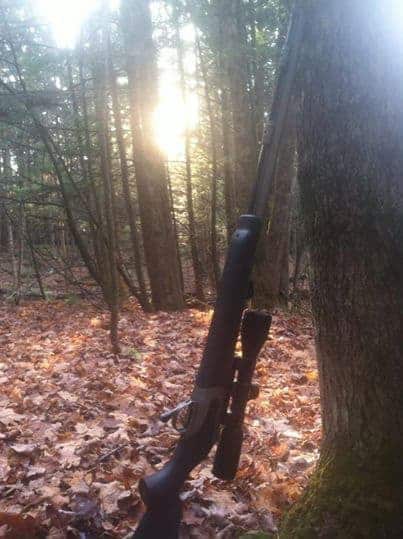 After a month and a half of chasing deer with a bow there is something exciting about heading to the woods with a gun over your shoulder. That’s precisely why I need to fix the sling on my muzzleloader.

Anyway, Saturday morning was met with enthusiasm as four of us headed to our stands for a chance at connecting with the elusive whitetail deer. Three days of doe season increases the excitement level even if you’re not one to shoot a doe. Just knowing any deer you see could soon be hanging in the shed is enough to get me going.

I started off sitting on the ground in an area that has seen early morning success in the past. The deer tend to filter from one side of the ridge to the other in the morning and I was situated perfectly for a meeting with one. Josh was hunting with his bow 100 yards further down the ridge out of a treestand we set up before dawn. The previous Sunday I had noticed some fresh sign in the area so hopes were high as daylight broke through the trees.

Around 8:30 Josh told me he could see a doe standing down over the edge of the ridge and it was heading my way. It never came close enough for him to get a shot and unfortunately it passed by out of sight from me. By 9:30 I felt like going for a walk so I slowly started picking my way down the hill on the opposite side of where I parked my truck.

The conditions were great for still hunting. A light rain the night before had softened the leaves just enough to make for quiet walking but not so wet that you couldn’t hear animals walking. I followed a stonewall down the hill carefully checking over each hill in the silence of the morning. I hadn’t visited this area yet this year and I was encouraged to see some fresh sign on the ground. I crossed over a windfall on the crest of hemlock knoll and glassed through the underbrush in hopes of spotting a deer. Nothing.

I stayed put for five minutes having learned from past experiences not to move to quickly. Just then I caught movement off to my right. It was a flash of gray and the twitch of white that instantly makes your mind say “DEER”! The large stump at my feet provided the perfect rest and I got in position quickly. My initial thought was that it was a buck, after all I was in a bucky spot, but after a few minutes the deer finally cleared from the tree it was behind and I was disappointed to see no antlers. All alone, way out in the middle of nowhere and it’s a doe. What gives?!

I watched her for the next 15 minutes but I never saw another deer. She looked old. Her ribs were showing and her coat was gray and weathered. I eventually decided to let her go. Had she been closer to the truck this story may have a different ending but the longer I watched her the steeper the hill looked back towards the truck. I wouldn’t mind spending the rest of the day dragging out a big buck, but an old doe didn’t seem worth it from here, especially when the doe sightings are fairly prevalent nearer the vehicles.

The day ended without any deer hanging in the shed. I was only able to hunt the morning but Dad and Josh had a little action during the afternoon hunt but they too came up empty handed. It was still nice to see deer. The sightings have been low so far this year so a little action helps keep the excitement level up.