On Friday the day before opening day of muzzleloader season in NH my wife asked me if I wanted to go hunting. For those of you who have read any of my previous posts you know this is a big deal since I was currently tag-less when she asked. She had been feeling better and later that night I clicked submit on the NH Fish and Game website and I had another tag in my pocket!

The next morning I met Dad, also hunting with a smokepole, and Josh, who was hunting with a bow, at our chosen hunting location. They were ambitious, having arrived a little after 5. I was lazy, and got there right at 6, still 50 minutes before light. I walked right past Josh who had been perched in his stand for a good half hour already. We shined our headlamps at each other and I continued on, carrying out my plan to hunt deep in the woods.

The morning was uneventful for me but Josh had a nice plump doe feed in front of him for 15 or 20 minutes but she wouldn’t come closer than 50 yards and she eventually fed out of sight. Dad didn’t see anything except for another hunter who decided to make himself comfortable within sight who then stayed there for an hour. Welcome to hunting in NH.

I thoroughly enjoyed myself but I didn’t see any deer. However, I did have to dig into my emergency toilet paper roll for the first time this year. That was certainly eventful, just not the kind of eventful I was hoping for…

I didn’t have a chance to get out again until Sunday evening and thanks to the stupid time change my available hunting hours were reduced, but I made it out nonetheless. I chose a spot close to the truck and I actually saw a doe shortly into my hunt but I let her go.  In the Wildlife Management Unit we hunt in you can shoot either sex for the first three days of the season but since I have only one more tag I would like to use it on a buck. So, I stood for another hour without seeing anything else.

About 15 minutes before the end of legal shooting light I decided to sneak up the hill to an area the deer like to feed. There are some apple trees there and I knew Dad was hunting at the other end of the same ridge. I was hoping that if anything had come out early to feed I could nudge them over to Dad. I worked my way up the hill through the dry leaves and I reached an old logging road just before cresting the hill. When I got there, I heard something in the leaves to my right. It sounded like a deer but it was so short lived I eventually moved on. I walked about 30 yards on the logging road to a spot that opens up and where I could get a look towards the apple trees. As I was slowly creeping my way further and further around the corner of a big bush I heard something walking again. “That’s definitely a deer,” I thought to myself. I turned my head and looked through the bush at the logging road where I had just walked and there was a deer standing right where I stood no less than 30 seconds earlier! 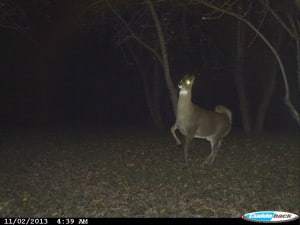 As I continued to watch her I realized she was going to continue walking right towards me on the same path I had just walked. Sure enough, in the last few minutes of legal shooting light she worked her way to the end of the trail where I was standing. She stepped out from behind the bush about 5 yards away and we commenced to staring each other down. She eventually turned her head and I lifted my gun to my shoulder to see if it could pull it off without scaring her. I did. Now I was standing there looking through my scope at a nice doe standing broadside only 5 yards away. It was all for fun anyway as I had already made up my mind not to shoot. In the end she walked back in to the brush and out of sight.

It was a fun evening and now I can’t wait to get out there again. When Steph told me I could get another tag I had to promise that I wouldn’t feel the pressure to get out in the woods every waking moment. As I verbalized the words “Of course not, Honey” my thought process was more like “It’s the first week of November, how can I not feel the pressure?” likely marking the first time I ever truly multi-tasked. Weird stuff like that happens when a hunter is backed into a corner and it is early November. I have yet to get back in the woods since Sunday, but thanks to actual responsibilities I haven’t had the chance. Work has been busy and my favorite 2 yr old boy needed to be watched while his mother was at work. But with cool temperatures forecasted for the weekend after a warm week, I’ll really be feeling the pressure soon… I think I should start looking for a nice floral arrangement now.