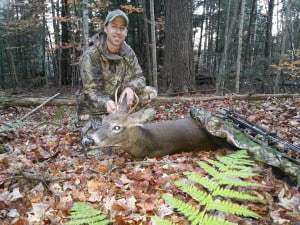 Some days you just have the feeling that it’s going to be a good evening in the woods. Wednesday Oct 23rd was one of those evenings. I was itching to go hunting. It had been quite a while since the last time I’d been out, no thanks to a resurgence of my wife’s Lyme disease. Stupid ticks. Anyway, I needed to stay home to help out around the house more than normal and couldn’t get out to go hunting. So, on Wednesday when she said she was feeling a little better I was excited to say the least. The weather was unbelievable – cool, dry, dead quiet and the faint breeze was blowing in the perfect direction. I had been hoping to get out of work a little early but that didn’t exactly pan out so I wasn’t able to settle in to my tree stand until 4:30.

Late October through early November is my favorite time of year to be in the woods. The temperatures are turning much colder and the bucks really begin to cruise for does. Fortunately, in New Hampshire no gun seasons have started so the deer are still acting very normal since they haven’t felt much pressure. It’s a perfect recipe for calling deer.

I set up on the edge of a staging area for the deer. They filter up the hill at night and feed up on top of the ridge or over the other side. However, given the size of the woods there are no real defined trails coming up the hill. The deer just work their way back up at night from wherever they decided to bed down during the day. This can be frustrating because it’s very hit or miss on a given night. This time of year, though, the power of a deer call can change all of that.

It was so quiet on that Wednesday night that it seemed like I could hear squirrels running back and forth from 200 yards away! Since it was so quiet I felt it was ok to increase my frequency of calling because if there was anything close I would know. I typically waited just 15 minutes before calling each time. I used a combination of a Can Call by Primos and sometimes a long non-aggressive grunt (Buck Roar by Primos). In my opinion the bucks this time of year are more curious than anything and an aggressive calling tone could turn one away but a non aggressive grunt could appeal to their curiosity. However, on my last few calling sequences I kept the grunt tube in my coat and just used the Can Call.

About 20 minutes before end of legal shooting light I received a text from my wife stating that she wasn’t feeling too great. Stupid ticks. So, being the servant that I am (yeah right) I decided I would call one more time and then start to pack up a little early while waiting to see if a deer would respond. Just about the time I got the end of my rope in my hand to tie my bow on I heard the unmistakable sound of something walking. I stood there quietly holding my rope and listened some more. Sure enough, I had to be a deer. I let go of the rope.

I finally found him standing about 70 yards away having just emerging from a thicket. His massive spikes stood out like a needle in a haystack. He continued walking to me on a string, obviously looking for the doe, and I knew I would have to make a decision. Normally, I would pass on a spike but on this night I chose not to. Filling my last tag meant that I wouldn’t be tempted to be in the woods for another three weeks until VT rifle starts and I have lots to do around the house. Oh yeah, of course, closing the deal on a buck that comes in to a call is pretty cool too so when he got to within 50 yards I decided I was going to take a shot if he presented one.

When he got to forty yards he suddenly cut down the hill to my right and it was obvious he wasn’t going to come any closer. I refrained from using my call again because I would have exposed myself to him revealing that there was no doe in the area. Instead, when he passed through an opening I made a bleating noise with my mouth to stop him. It didn’t work and he kept walking. I tried again and he still wouldn’t stop. When he reached the last shooting lane I pretty much yelled at him and he finally stopped. I took my time aiming and released the arrow.

At the shot I knew the arrow had struck him too far back. I listened to him crash his way down the hill out of sight but I wondered if I’d hit him well enough. I climbed down ten minutes later and retrieved my arrow. It was a complete pass through and the arrow was bloody but there was evidence of a gut shot and I made the decision right there not to follow him at all that night. Tempted as I was to take just more step on the blood trail I stuck to my original plan and walked away. I listened to coyotes howl on the next ridge over all the way back to the truck and I was sick to my stomach thinking I might lose the deer to coyotes. When I finally got back to the truck I felt like I was in a lose-lose situation. I could leave him alone and the coyotes could get him or go after him and push him and likely never find him. It was a sleepless night.

I met Dad back at the arrow about the time we would have been climbing into a tree stand if we had been hunting. We followed the sparse blood trail for about 45 minutes covering only a hundred yards. Then, in the gray light of morning I saw something white out of place and through my binoculars I could see it was the butt end of the deer lying on its side. The decision to back out right away had been a good one as he’d only run about 150 yards total. My arrow had caught the back of his liver and it was obvious he’d been dead for a long time.

In the end, filling my tag on this little buck was worth every penny. There are bigger bucks out there but calling one in is such a thrill. Hunting is not just about shooting a huge deer (easy to say after you’ve just shot a little one); it’s about enjoying the hunt. Last Wednesday night and Thursday morning I was able to experience all the excitement, worry, sleeplessness, success, and memories you could ask for when bagging a deer. So his antlers aren’t that big; if I’m lucky they’ll score 21” Pope and Young. Who cares? Don’t get me wrong, I’d love to shoot a monster but on this hunt I let the excitement of it all take over and that spike might as well have been a big 8 pointer. That’s good enough for me! 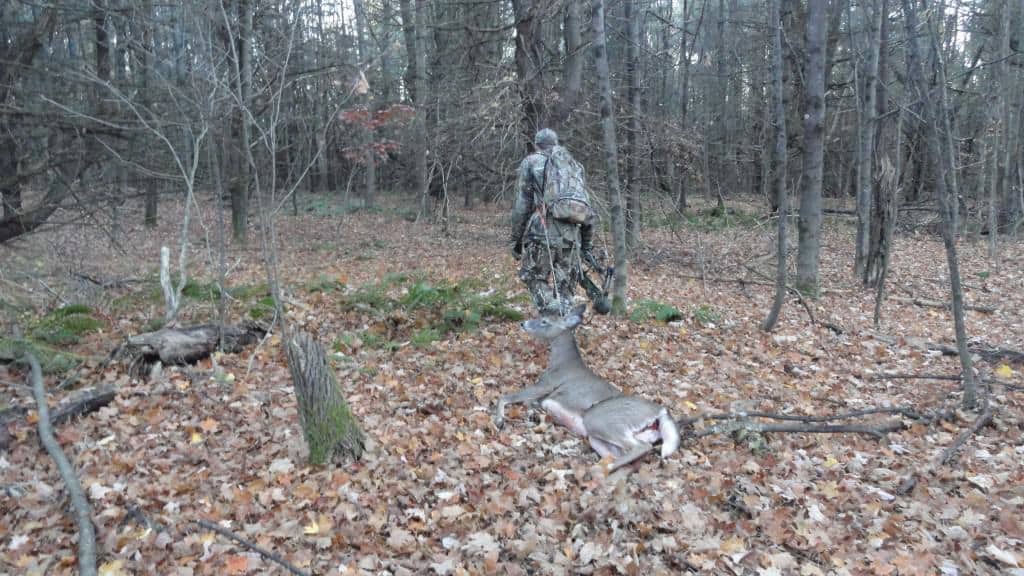