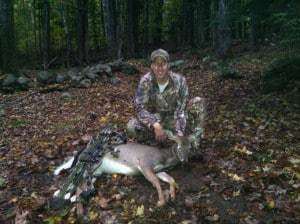 First of all, my Wife is awesome 🙂

I left the house in a rush again and got to my hunting location around 5:15 pm. That wasn’t quite as early as I had hoped, especially since I still had to hang my tree stand. I had planned to sit in the same tree where I had the run-in with The Snorter, but this time I was going to be 20’ up.  Still feeling a little beat up by her, I did not want to get busted again.

I grabbed my climber that I had stashed in the woods and raced out the tree. I knew exactly what tree I was going to climb since I had shot another deer from this location before. I sounded like rickety machine plowing through the woods. My bow was hanging over my left shoulder and the two separate pieces of my climber over my right (who has time to actually put them together?).  At any one point two of the three pieces were clanking off one another letting all the furry creatures know I was coming. With no time to waste, though, I didn’t have time to slow down and catch my breath. I’m not saying I didn’t slow down…just that I didn’t have time to. Just about the time I almost passed out I secured my climber on the tree and started climbing.

I strapped myself in and hauled up my bow at 5:40. Not bad since I had just run 3 miles with a ton of gear in 25 minutes. In reality it was only 600 yards and I didn’t run, I huffed and puffed at a fast walk. As is my usual custom I ranged notable landmarks around the stand to familiarize myself with distances incase a deer trotted in to quick to give me a chance to range it. The wind was perfect when I left the truck but was swirling all over in my stand so I was thankful to be up in the tree.

Right around 6 o’clock is when the music started playing in my head just like it does in the videos. I heard the unmistakable noise of an animal walking and since it was damp I knew it was already close. I could only see about 40 yards in the direction I expected the deer to come from and when I finally saw her she slipped out from under a hemlock 25 yards away. My heart rate increased to approximately 300 beats per minute and both of my carotids were doing all they could to not blow. “Doe,” I thought to myself, “I have a tag for one of those.” I could tell she wasn’t a fawn but I also had a feeling she wasn’t a mature deer, so to speak. What to do? The following is a synopsis of my thought process:

“She looks big enough. She looks small. She getting closer. Better decide soon. She looks bigger now. I think I see antlers on her head. I’m imagining that. That’s ok, it’s more exciting that way. She’s 7 yards now. Decide soon. Got to spin, she’s walking right behind the tree. Ok, made it. She’s still oblivious to my antics up here. Obviously not The Snorter. Not wary enough. That’s probably an indicator that she’s not that old (and not that big). That’s a big imaginary rack there. 8 pts? She’s stepping out behind the leaves on that sapling. I’ve never seen a doe with such a big rack. Definitely a shooter. Steph will be mad if I don’t shoot and I have an opportunity. I should shoot. Do I shoot? I don’t want to disappoint her. This must be a gift from above. Who am I to say no? I should shoot.”

I’m not sure who won, but I finished the argument with myself and pulled my bow back. She was broadside at 5 yards when I released. It was a good shot and I saw her bound off 50 yards. She paused for a moment and I thought she would fall there but she ran out of sight. A few seconds later I heard a “Whump!” followed by some thrashing and I knew she was dead. She ran about 80 yards total. Success.

1. It’s time to sharpen my knife. Apparently I’ve been whittling way too many trees and not gutting enough deer.

2. The fire station scale is awesome. That’s the second deer I weighed in there and they have both been heavier than expected. This one weighed in at 80 lbs even….

3. Christian was a perfect hunting partner for the evening as he cannot give me grief for shooting a medium sized imaginary 8 pt doe. Find a hunting partner like him because if you are going to shoot deer on the smaller side it’s good to have someone along that has experience with that sort of thing.