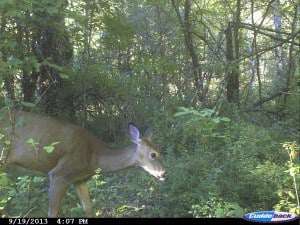 Conditions:  Sunny, Temps in the 60’s with a light breeze

It was a last minute hunt and I didn’t have time to make it to the secluded tree so I decided to run up to another spot where we have had a lot of success in the past. The trouble is, it’s a difficult spot to hunt from the ground with a bow but I hadn’t done much scouting in the area yet and I wanted to see what kind of activity there was. I ended up standing at the base of a tree we normally have a climber attached to. It afforded me the most cover but it was still wasn’t great. Any deer that came out would be right on top of me before I even saw it.

About 45 minutes before dark some squirrels started chattering just out of sight and in the direction of where I expected a deer to come from. A few minutes later I heard a deer blowing (I’ve always called it snorting) close to where the squirrels were making noise. About 10 minutes later I was scanning with my binoculars and suddenly a walking deer filled up my entire field of view. (Only tonight did I discover that my bino’s were set to 17x which explains why the deer was so big.) She was close, probably 45 yards and closing fast. I instinctively lowered my binoculars and grabbed my bow off the hanger. I was standing right where she was headed and she must have noticed my movement and came to full stop.  She had my pinned and I could really feel her giving me the ole evil eye as she stood there for what seemed like forever. She then starting one of the most memorable snorting displays I’ve ever witnessed. She snorted and snorted. She couldn’t figure out what I was she just knew I wasn’t right. Certainly not the first time someone has thought that about me by the way. I could tell she wanted to continue on past me but wasn’t confident enough so she started to circle down wind. As she circled she ran behind a big clump of trees and I drew my bow back. If she had continued I would have had a shot at 25 yards. She didn’t continue. She stopped again at about 35 yards and turned to face me. Then she snorted. She snorted again. I watched her through my peep site and we traded evil stares.

She stood there for what seemed like an eternity but only because I was at full draw. Eventually she trotted halfway back to where I’d first seen her and proceeded to snort at me every 15 seconds for 10 full minutes at least. “Enough!” I thought. “I can’t take it anymore.” I conceded defeat but she continued to yell at me. She was a wary old doe that must have woken up on the wrong side of the bed. It’s pretty obvious why she was travelling alone….

So, my second hunt of the year had some action but I came up empty handed. It was a lot of fun and she was (and still is) a worthy opponent. So am I, though, and I’ll be back.