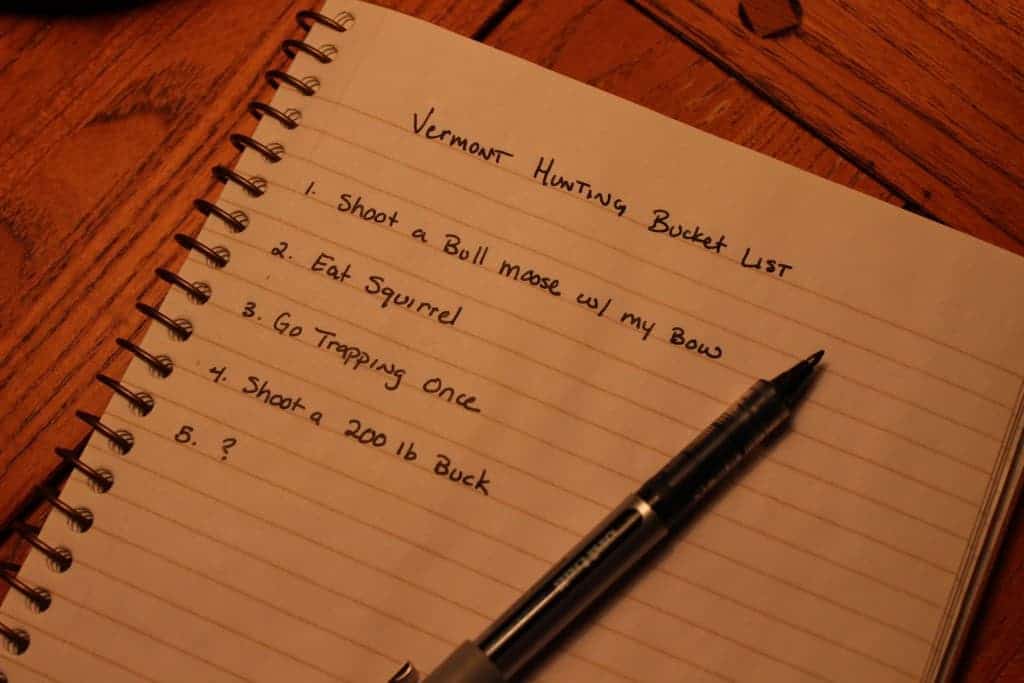 Last week I nearly died. Thanks to a case of the flu (or something like it) I came face to face with my own mortality and was forced to accept that I have not accomplished all that I want when it comes to hunting in Vermont. OK. OK. I wasn’t really that close to death, at least not from sickness, but the boredom that came with it almost killed me. I was confined to our spare bedroom and I watched endless hours of hunting shows. What else is there to watch? What I discovered is that I am a rather boring hunter. In Vermont I’ve only hunted deer; maybe it’s time to expand my horizons a bit. So, while I laid there in a feverish state I comprised a list of some things I want to accomplish in the Vermont woods before giving up the ghost.  Here they are:

1. Shoot a Bull Moose with my bow. This is by far my ultimate goal in Vermont. I believe shooting a moose with a bow here could be the most difficult to accomplish of any of my bucket list items for a couple of reasons. First, very few tags are given out, and if you have ever applied for a moose permit in Vermont before you know that a high percentage of tags seem to go to the same people each year, further reducing your odds. Second, in 2013 only 1% of applicants were fortunate enough to draw a tag and successfully shoot a bull moose. In 2012, the odds were lower. Nevertheless, I will keep trying until I die or I’m thrown in jail for killing the guy who always seems to win the lottery.

2. Eat Squirrel. I’ve never tried it but I’ve always been curious. With a season that runs from Sept 1st – December 31st I should have plenty of time to bag one of these critters. Next Fall I plan on accomplishing this goal and cooking up a few squirrels in my wife’s Crockpot. She’ll love that. I already owe her a canning pot after boiling my deer head for a European mount anyway. What’s one more pot?

3. Go Trapping Once. I have always had respect for trappers but realized at a young age that I wasn’t the type. Growing up I envisioned trappers as burly fellows and unkempt. They had facial hair out of control, no doubt to keep them warm on those cold winter days as they checked their trap lines. But that’s not me. I can’t grow facial hair and I’m not burly in the least bit. It takes a week of not shaving for my wife to even notice a shade change. Then, I catch her longingly staring at me, likening me to a scruffy Brad Pitt but I crash back to reality when she says, “You look awful. Go Shave.” Someday I will check a trap line with someone who fits the mold though – even if it is only once.

4. Shoot a 200 lb Buck. Very few Vermont hunters have been fortunate enough to join the 200 pound buck club. The size of the rack isn’t the most important thing here, it’s the weight. One day I hope to be one of the lucky few that pulls the trigger on one of these monarchs. I also hope that my bullet goes where it’s supposed to when I pull the trigger. Bucks of this magnitude can cause hunters to lose all the wits about them and turn crack shots into bad shots. They call it buck fever.

5. Shoot a turkey for real. A turkey for real you say? Yes, a turkey for real. I’ve actually killed three turkeys but they were all with my bow and I was really hunting deer. Let’s just say I capitalized on an opportunity (or three) when presented with one. I’m not saying those hunts weren’t challenging because they were but in their own way. I had to stalk two out of the three turkeys in the open hardwoods to close the distance and was successful at doing so. That’s challenging enough on a bird with such keen eyesight but I have never turkey hunted in the spring and attempted to call one in. To skillfully convince an animal to come in to a noise that I create is a worthy challenge and one I would love to accomplish some day.

6. Watch Sam shoot his first deer. My dad was with me when I killed my first deer. I didn’t understand the magnitude of that achievement from a father’s perspective back then, I was only 10 after all, but I’m beginning to understand it now. Sam is only three (three and one half if you ask him) and I can’t wait until he’s old enough to hunt.

7. Find a Shed Antler. In Vermont this may be more difficult than finding a needle in a haystack. I know they can be found, though, I saw Chip and Dale find one the other day when I was watching cartoons with Sam. Those two have the most random stuff happen to them. Needles are not easy to find. Maybe I’ll have that kind of luck one day when I’m on the prowl for shed.

8. Tag out. It’s true. I’ve never killed three deer in a single hunting season in Vermont. One year I was close. I was still hunting through the hardwoods during muzzleloader season and was slowly approaching an area I knew to hold bedded deer. Sure enough, I poked my head over a rise in the landscape and a nice young buck stood up when he saw my ugly mug. He stood long enough for me to verify he was legal and I pulled the trigger only to have the gun misfire. Of all the years I have killed at least two deer that was the first (and only) time that I’ve had an opportunity to shoot a third. Maybe next year.

9. Have a booth at a hunting show. I don’t sell anything so paying for booth space at a hunting show seems a little ridiculous but I’ve done a lot of ridiculous things in my life. Since beginning my blog I’ve had the opportunity to interact with a lot of great people around the state. Someday it would be an honor to meet them and talk hunting, even if it’s only for a weekend.

10. Shoot a deer from the ground with a bow. I am not sure how many deer I’ve killed with a bow but I do know that every one of them has been from a treestand. Hunting out of treestand definitely increases the odds of shooting a deer but going toe to toe with one on the ground would add some challenge. When I was just a young boy I used to watch a hunting video that starred Fred Bear himself. He was hunting the great state of Pennsylvania and stealthily stalked through the dry leaves to within bow range of a nice 8 pt buck. After watching the video approximately 132 times it dawned on me that he hadn’t actually stalked up on the deer but instead used some tricky video editing to make it look that way. But it didn’t matter to me, he was a great hunter and if I’m ever going to be as good as him I need to shoot one while on the ground. With a recurve. From a distance of 100 yards.