Just last week I saw someone’s twitter post that read, “I don’t keep the racks to brag about them, I keep them because of the memories they hold.” I’ve been blessed to hunt in some great locations around North America, but to be honest, shooting a deer with a large rack has never been the main reason to place a hunt in my favorites category. It is time spent with friends and family that makes the hunt memorable and it is hard to choose between all the hunts I have ever been on to come up with my top five. As a result, I am not going to come up with my top five. I’ll just come up with five for now and talk about the others later… 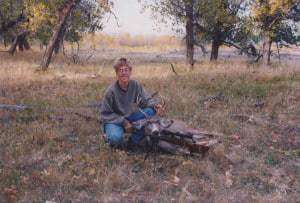 My Favorite Hunt of all time: This was my first real introduction to hunting in Wyoming. I had been before but this time I had a couple tags in my pocket. I was 14 and my dad, my Uncle Dan, and my cousin Branden camped out on the Powder River in Kaycee, Wyoming for a couple days. It seemed like we saw hundreds of deer during the few days we camped out but we never saw Mr. Big so just before an early winter storm rolled in and ruined our adventure I shot this small buck. I’ll never forgive the weatherman and rumor has it I cried on the ride all the way back to my uncles house and for the next 16 years. It was an awesome adventure and a great time with family.  I hadn’t taken a shower in days which lead to the hairdo that will live forever in infamy. That hair, coupled with my favorite sweatshirt that never came off, and the awesome adventure with family makes this my favorite hunt of all time. 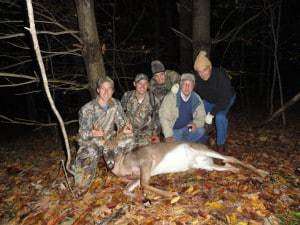 My Favorite Hunt of all Time:  A few years back I was in the lucky stand and this fine young 8 pt came walking by me when it could have walked by anyone else. My brother-in-law Jared was up visiting for the week. He doesn’t hunt but has time off in October so he and my sister along with their kiddos often come up for a visit during hunting season. So, we dress him up and fine tune his archery skills and he tags along for fun. On that night, Jared and my other brother in law Josh, were out in the woods with me waiting for Mr. Big. As I said earlier, he happened to walk by me and after I shot him I called my Dad who was at home and my grandfather who was up visiting as well to let them know. I have never had the chance to hunt with my grandfather so it was fun to have him and everyone else along for the recovery. The picture that was taken that night will always hold a special place in my heart even though the rack is not all that big. In the future I’ll pay more attention to the pose in the picture and hold the rack closer to the camera to make it look bigger. Then again, I wouldn’t want the rack to take away from the family photo… 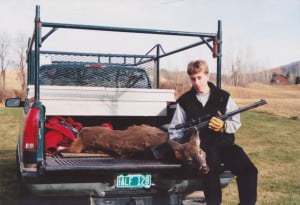 My Favorite hunt of all Time: I realize there is no rack on this one but this doe was the first deer I ever shot on my own and to top it off I was still hunting my way through the woods. Impressive? Maybe not to some but it meant a lot to me because I realized I could do it all on my own and I new how to outsmart a whitetail. I was creeping down a pine ridge and slowly peaked over the hillside when I saw her walking along. She had no idea I was there (that’s a great feeling) and I waited for her to present a shot. I pulled the trigger when she stopped in an opening and recovered her by myself as well. I did not drag her by myself though! 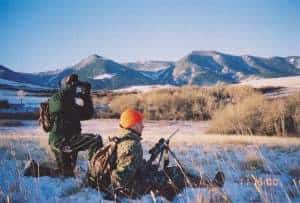 My Favorite Hunt of all Time: When I was a senior in high school my Dad and I headed west to the great state of Wyoming to visit my Uncle and do a little hunting again. This time we were there during the rut and for a guy from Vermont who rarely gets to see bucks chasing does it was an incredible experience. My Uncle had worked hard during the summer to secure a ranch to hunt on and it was an amazing. I shot a nice buck on this trip but my one of my favorite memories is this picture. I was sitting with my Dad and Uncle Dan and thankfully my Dad thought to take out the camera and take a photo of the two of us glassing for deer. There’s just something about the details in the picture that bring me back to that moment every time. It was cold and snowy and the sun was just starting to hit the Big Horn Mountains to the west of us. The bucks were chasing does in and out of the brush in the draw and I’ll be surprised if I ever experience action like that again. 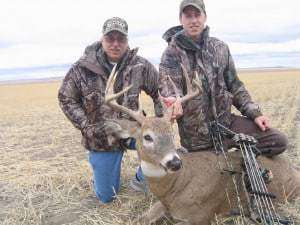 My Favorite Hunt of all Time: Back in 2009, Dad and I went on our first hunting trip that included just the two of us. We went to the famed Milk River in Montana. Fortunately, we went before Blue Tongue and EHD wiped out the entire herd. It was our first trip on a guided hunt and it was a little different than in all the movies. Being from Vermont we were just excited to see deer and wanted to hunt all the time but the outfitter was partial to only hunting in the afternoons. Fortunately I connected with a nice 1o pt at 34 yards and have the rack to remind me of the hunt. It was a great hunt with Dad and one I will never forget! Every hunt with Dad is great, regardless of the state it’s in or the amount of time, but there is something special about a trip together for a certain length of time that makes the memory that much greater.

It can be difficult to adequately portray the special memories that can only made between great friends and family while hunting. I realize that the photos above mean more to me than anyone else but perhaps the stories will remind you of your own great hunts and memories. Happy Hunting.