My Second Deer with a Bow 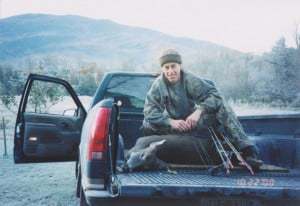 My Second Deer with a Bow

I shot this doe when I was 17 and was late to school as a result… The night before I was sitting in my tree and she came trotting up the hardwood ridge about 30 mins before legal shooting light was over. I was about 25 feet up in a tree and she was probably 45 feet below me on a steep hillside. She stopped when I bleated and I let an arrow fly. Unfortunately, it all felt good right up to that point. Because of the steep angle of the shot I hadn’t leaned out far enough from my tree stand and the bottom CAM on my bow hit my treestand which kicked my arrow off target to the right. I hit her in the hind quarter… It was a sickening feeling for sure. I watched her run down the hill and out of sight. Just before dark I climbed down the tree and followed her for a ways with Dad who had made his way over by then. We pushed a little too far and heard her run off in the dark… “I guess we should come back in the morning” was the consensus between the two of us.

But, low and behold, on the way out of the woods we got lucky. I was walking ahead of Dad and heard him say “come back here”. I turned around and shined my flashlight on the ground and there in front of me was a pool of blood as big around as a Frisbee. I had stepped right in it. We instantly shut our flashlights off and listened. We could hear her not more than 50 yards away walking up the hill. It was really unbelievable because we were 300 yards from where we had jumped earlier in the opposite direction we heard her run, not to mention higher in elevation.

The next morning we were out at first light and found her in 5 minutes laying where we last heard her. My broadhead had cut her femoral artery and she bled out real quick. Strangely enough, when I skinned her out I found another broadhead buried in her spine fully encased in puss. It’s hard to believe she could take a hit like that and survive. There was no obvious scarring on her hide from the broadhead either.

Even though it wasn’t a clean kill it was still a good memory. I didn’t sleep that night, missed first period classes (bummer that was all) and got my second deer of the year with a bow.