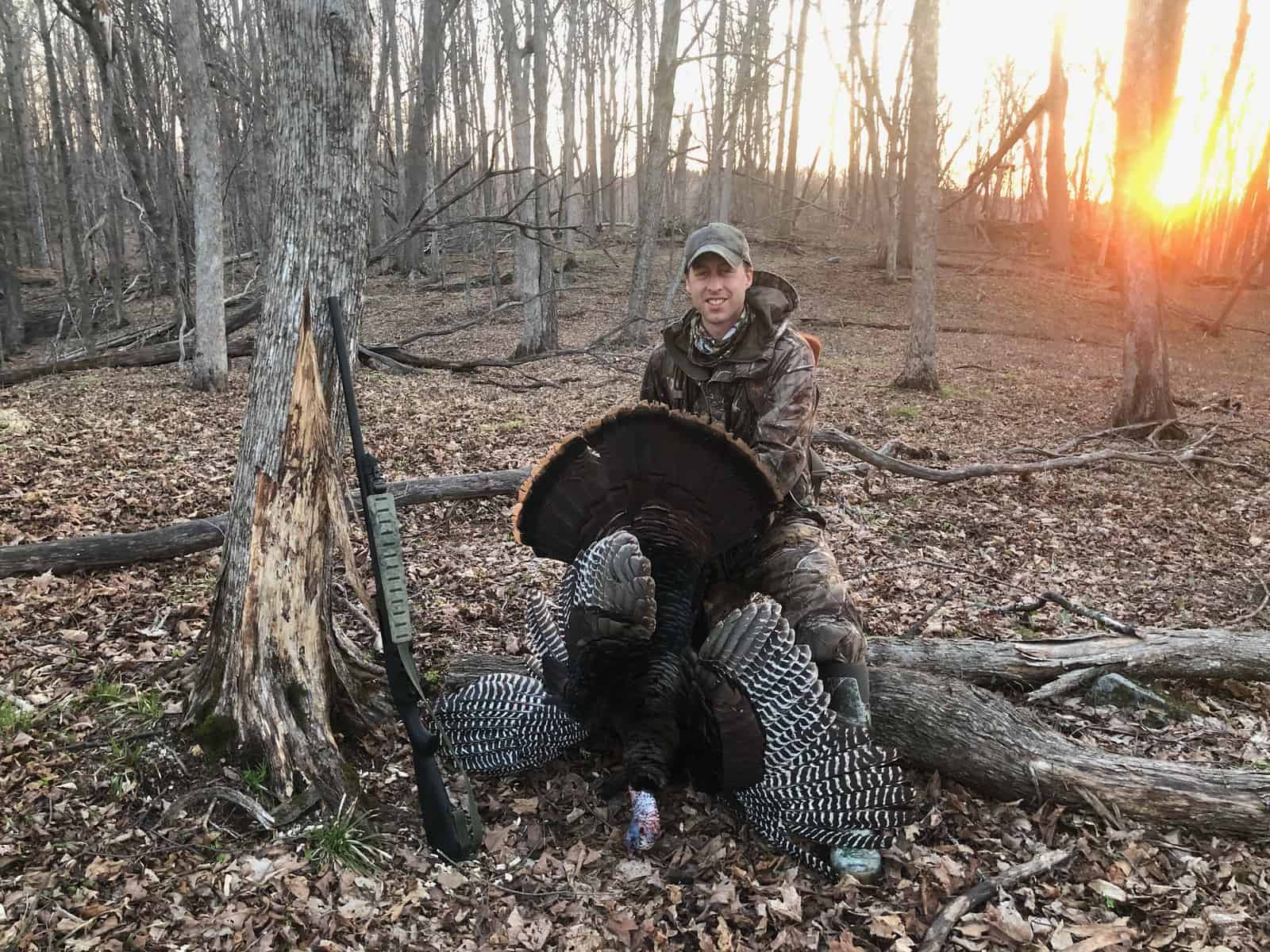 I still consider myself to be a newbie when it comes to turkey hunting, but I do think I’m starting to grasp the general strategy. Find the birds, figure out how to get close to them, and then shoot one. Two years ago, I tried spring turkey hunting for the first time and on my very first hunt I managed to shoot a sapling in lieu of a tom turkey. It was an invigorating experience for both Tom and me, but despite the disappointing end to my first hunt I knew turkey hunting was something I needed to try again.

I think I only hunted two or three times my first year. My second year I was able to hunt more times than I have fingers on one hand, but not more than I have on two. I encountered feathered foes on each morning hunt, which involved a quick mile long hike to the top of a hardwood ridge before daybreak before work. I came home without a bird at the end of each hunt, but I couldn’t help noticing the difference between being in the woods for a spring sunrise as opposed to a fall one. Both are beautiful, but the crisp air of a spring morning at daybreak has a different feel to it. It brings with it the feeling of new life…. at least until something gets killed.

I killed my first spring turkey on the second day of the season this year, and I also wounded two big trees at the same time. The story of this bird dates to last year when I would make those long, ignorant treks to ridge before light each morning. The birds were on the ridge every morning, always roosted in the same general vicinity. As the season wore on I became more and more aggressive, but at the outset I was timid in my approach hanging too far away to entice them in with my weak calling skills. With each hunt, I moved closer to them in the pre-dawn darkness, but with no luck. I finally decided that I needed to set up above them, so I did and spent the next hour of daylight watching them walk back and forth 100 yards below me. Finally, on what would be my last morning hunt of the year, I set up my decoy, Shells, at the crest of the ridge and hunkered down at the base of a tree twenty yards to the opposite side of the gobbling fools.

The word “perfect” doesn’t even begin to describe my set up. Birds were gobbling just over the edge of the hill, Shells was looking good within view of her would be roosted suitors, and I was poised at the ready with my trusty new Benelli. It was all over but the killin’.

Naturally, the birds flew the other way, giving the proverbial middle finger to Shells and me as they tumbled from their roost. Not to be deterred, I scooped her up and we hustled down the ridge to cut off the thunder chickens as they made their ascent up the hardwood ridge. I moved as close as I could without exposing myself to the watchful eyes of the flock and reset, but it was not meant to be. For a brief moment, I thought my calling was drawing Tom into range, but a real, live hen ended up taking him away from me. My last memory of the 2017 turkey season was a Tom strutting his way along a hardwood ridge in the rays of early morning sunlight. If I was meant to go home empty handed, that wasn’t a bad way to go about it, I figured.

When the 2018 season arrived, I still didn’t consider myself a turkey hunter, just a guy with a high level of interest in the idea of being one.  Opening day came and went without finding a bird willing to play the game. I was tagging along with my friend, Christian, and his daughter, Karis. Why she allowed me to come along, I still don’t know. Maybe she wasn’t given the opportunity to speak out against it. Christian had come close to drawing a bird within my line of fire the first time I ever went turkey hunting, only to watch in disbelief as I harvested a sapling mere feet in front of my barrel instead of the Tom. We talked often of hunting turkeys together again after that experience, but somehow he was always too busy that year. Strange.

After our lifeless hunt on opening day, Karis declined to go the next morning citing school responsibilities as the main reason. She has a lot to learn yet. With Karis out, I suggested we try for the ridgetop birds I didn’t have any success with the year before. A plan was made to meet at some ungodly hour and hike to within earshot of the ridge where the first owl hoot would crack the silence of the morning. The suspense did not last long as gobbles echoed back to us from the ridge above. The birds were there.

We hustled into position, one I said was where we wanted to be based on my experience from the year before. Christian set out a decoy on the crest of the hill as I had done last year and then took up residence behind me with a slate call and a 12 gauge. The light was already breaking over the horizon by the time we settled in, but we’d made it in time. The birds were still on the roost, and each time Christian touched his slate call the woods would come alive with the sound of fired up birds. The word “perfect” doesn’t even begin to describe our set up.

Naturally, the birds flew the other way, giving the proverbial finger to Christian and I as they tumbled from their roost. Not to be deterred, we scooped up the decoy (I don’t think he names his decoy’s) and we hustled back the way we’d came to cut off the thunder chickens as they made their ascent up the hardwood ridge. I couldn’t help but think that I’d read this script before.

As we drew close to the edge of the hill, we peaked over and a Tom was in full strut about twenty-five yards away.

“He’s right there!” Christian whispered as we both ducked down. “If you can see him, shoot!”

I didn’t have a clear shot from my position thanks to fairly large trees between me and the bird. Right there, in the middle of an open hardwoods, I had trees in the way. Of course. I held my position on the edge of the hill, my line of sight allowing me to see just over the rise to where the ground flattened out at the base of the small embankment we were overlooking.

“Why aren’t you shooting?” I heard from behind me.

“Because I can’t see him, dummy!” I whispered back. I didn’t really say dummy, but I’d be lying if I said I didn’t want to. “I’ve got trees in the way.”

From where Christian flattened himself to the ground, he no longer had a visual on Tom. He had to rely on me for that and I couldn’t see a whole lot either, but both of us could hear the Tom spitting and sputtering as he strutted back and forth. That was great to listen to as we waited for a shot opportunity. Suddenly, two hens popped into view.

“I don’t know, I can only see two hens now. One of them is looking at me.” I answered. My gun, which I’d been holding at the ready, instantly gained fifteen pounds at the sight of the hens and my arms felt like they’d fall off at any point. Moving an inch was not an option or the whole situation would fall apart. Off to the left of the hens, out of the corner of my eye I could still see the tip of Tom’s fan as he strutted back and forth behind the big trees perfectly positioned between us.

Eventually, the hens worked their way out of site on the embankment below me providing some relief for my arms.

“The hens are gone.” I whispered back.

“Can you shoot the Tom?” I heard in response. His concern over my abilities was becoming clearer as the intensity of the situation grew.

“No, he’s still behind the trees, dummy.” I didn’t really say dummy, but I’d be lying if I said I didn’t want to.

After what seemed like an eternity, Tom moved just far enough to allow a clear enough view for a shot. He turned to face me while in full strut, his head and neck framed beautifully by the massive trees that stood halfway from me to him. The gap was barely wide enough, but it was all I needed. My Benelli barked, unleashing #4 shot at 1200 feet per second at the bird and the surrounding trees.

At the shot, the hillside below us erupted with birds. There had to have been 1000 of them, or maybe ten. It was hard to tell amidst all the excitement. Christian and I sprinted toward the flopping Tom in case he had to be tackled to prevent an escape, but it was clear he would never fly again. The trees, however, would live to see another day. Their half-moon shaped battle wounds from the blast will serve as a reminder to me of my first turkey each time I pass by them in the future.

We took a moment to inspect the bird. He was a beauty and a great one for my first. He weighed in at twenty pounds, six ounces and carried a 7 1/4” beard with 5/8” spurs. After snapping a few photos with the rising sun as a backdrop, I stuffed Tom into my backpack and we headed for the truck, citing responsibility as the main reason for having to leave the woods. Responsibility always gets in the way of good fun. Whoever came up with that concept clearly never hunted turkeys on a beautiful spring morning.

I think I’m on my way to becoming a turkey hunter  – it’s too much fun to think of passing on the opportunity.

Did you enjoy reading that post? If you did, please consider sharing it with your friends or subscribing to have future articles delivered right to your inbox. You can do that here: Subscribe