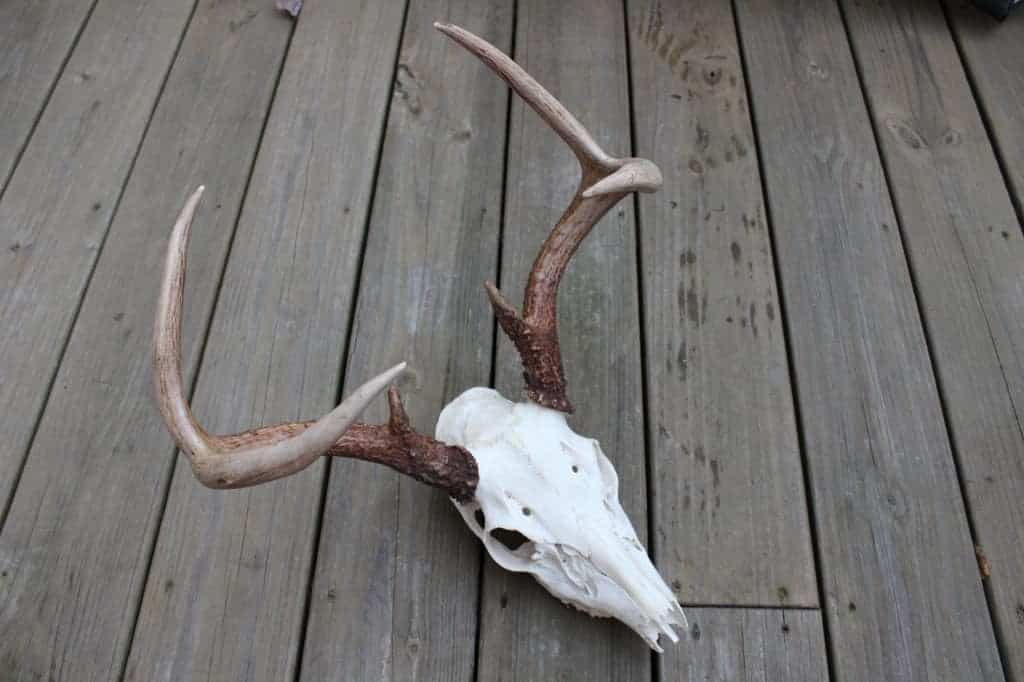 With a decent buck on the ground early in the season I had a little extra spare time around the house to try something I’ve always wanted to do – a European Mount. The buck was nice but he wasn’t big enough to tempt me to have him mounted so I set to work researching what I needed to complete a European Mount on my own. Through research (I watched one video on YouTube) I learned that I only needed a big pot, a hot flame, some bleach crème from a salon store and some small hand tools.

Even though I had done vast amounts of research I still went in to the project a little more excited than prepared.  No problem, a little stubbornness can overcome a lack of preparation any day. So, I set off on what I thought was going to be a morning adventure with Sam that turned into 3 days of on and off work. I took pictures to document what I learned each step of the way. It went like this: 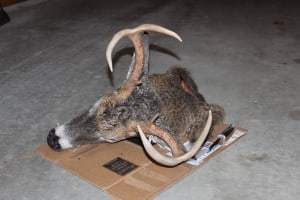 My plan was to skin it and cut off as much meat as possible before bringing it home from my parents house to boil it. However, I overlooked the fact that it would be FROZEN SOLID and I couldn’t get all the skin off, let alone the meat that was still frozen to the skull! So I gave up and decided to soak it in hot water. 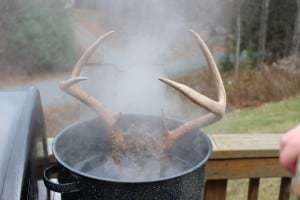 I simmered the head for about an hour and a half before removing the rest of the skin and more meat. Most of the big stuff came off easily but it was at this point that I realized it was going to be a little more work that I first thought. Plus, when my wife saw what I was up to with her canning pot she banned it from the kitchen for life. Add that to the cost of the project. 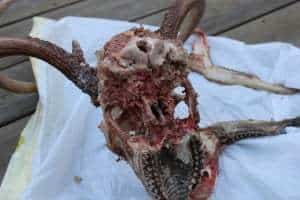 After the first boil the skull looked like this picture. It probably took me an hour of picking at it to get it to this point but had the skull not been frozen this is what it would have looked like before the first boil. That would have saved a ton of time. So, with Sam down for his nap I heated up a new batch of water and boiled it for a second time. 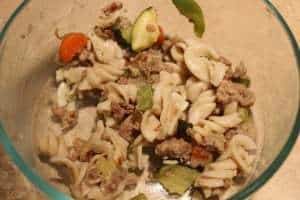 My wife is a great cook but she decided to try a new recipe that included noodles and burger (venison I might add), and although it tasted great, it looked an awful lot like my last two hours of picking boiled meat chunks and brain matter off of the skull. Ironic? Maybe, but that didn’t make it any easier to eat. 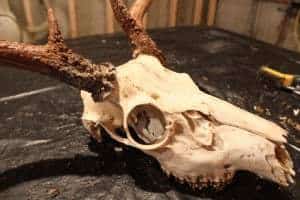 After soaking another 2 times for a couple hours each I was able to clean the skull to this point. The skull looks cleaner in this picture than it really was. There were still small bits of tissue and meat that were difficult to get off – especially without the correct tools. An awl or some kind of pick with a hook on it would have been very helpful. Instead, I used a paperclip which was no match for the stubborn brain matter on this fella. 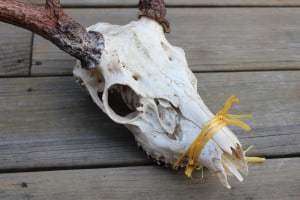 After church on Sunday I warmed up another batch of water and added a little Dawn dish soap to help degrease and loosen up any last remaining bits of flesh. The nose bones had started to split (I’d actually lost the two lower bones earlier in the process) so I tied some rope around the nose to keep them from separating even more. The next day I used some Gorilla Glue inside the nose to bond the bones back together. It worked like a charm. 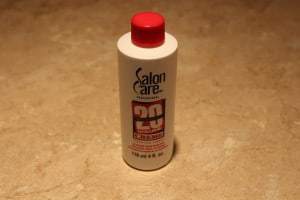 Quite possibly the most interesting part of the entire project was the unexpected conversation I had with the young lady behind the counter at the salon store. She asked if I needed help and when I explained to her what I was looking for and why she knew exactly what I needed. It turns out she happened to be a hunter too and came from a family of hunters with a house full of European mounts! She was more interested in what I shot and telling her own stories than selling hair care products. Luckily for us, I was the only one in the store and we had ample time to tell deer stories before I had to leave. Cool Stuff. I brushed the product on and let it sit for 45 minutes, checking on it often. I used 20 volume creme (which I gather means 20% peroxide) but 40 volume seems to be a popular choice.

Overall, I am pleased with my first real attempt at a European mount. My other first attempt was during my first year of marriage when the only burner I owned that would keep the water hot enough was on the kitchen stove. That attempt ended quickly with both me and the partially boiled deer head sitting out back on the wood pile discussing the challenges of marriage. Fortunately, I was eventually allowed back inside but the deer head stayed out for the better part of a year.

So here is a quick summary of the process:

1. Boil the head multiple times until you can pick the skull clean. Be careful not to boil too many times as this will weaken the skull somewhat.

2. Once you have the skull picked as clean as possible, heat up one more batch of water and add some Dawn dish soap. Let it soak for a half hour.

3. Let it dry out and then apply the bleach creme (peroxide). Repeat until you achieve the desired whiteness.

Without a doubt, the most maddening part of the process was picking the meat and brain matter out of all the nooks and crannies. But I was determined to keep picking at it and I’m glad I did. I’m already looking forward to doing another one. I mean, why not? I’m the proud owner of a canning pot – I might as well use it.