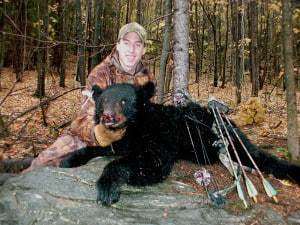 It’s not the biggest bear I admit, but it was the first one I had ever seen in the woods. It was a warm, calm afternoon and I was dozing off in my treestand with thanks to a little sun on my face. The classic sounds of an animal walking in the thick bed of dry leaves caused me to snap to attention. I was sitting on one of the more active deer trails on the property but had never seen a deer on it so my excitement level was starting to go through the roof as the noise became louder. After an hour of listening (more like 2 minutes) to an animal walking in the leaves I saw a black paw move behind a scrubby hemlock. “Bear!” My mind went crazy and I am sure the tree was noticeably shaking from my excitement at that point.

Up until that point I had always been confident that a bear tag came automatically with a VT hunting license. Now that I was about to be presented with an opportunity to shoot one I suddenly lost confidence. I placed my bow on my lap and furiously dug through my wallet to find my license. I remember being so nervous that my legs started shaking badly and the arrow that was resting on my bow started clanging on the metal treestand as a result. Thoughts started running through my head like “Pull it together, Moron, you look and sound like an idiot”. And then I found my bear tag right beside my deer tag where I knew it was all along. Confidence was restored and I somehow I was able to refocus.

By the time I had shifted the contents of my wallet to my seat and stood up so I could get a shot the bear has worked its way almost past me. There was one more lane left and I ranged it at 38 yards. I drew back and settled the pin on the bear when he stopped in the lane and sent an arrow through both lungs. Perfect hit.

The bear ran down the hill and as he ran out of sight my eyes lowered to my seat and came to rest on my bear license that was still laying there. I picked it up as I sat down and then stared at it and shook with excitement.