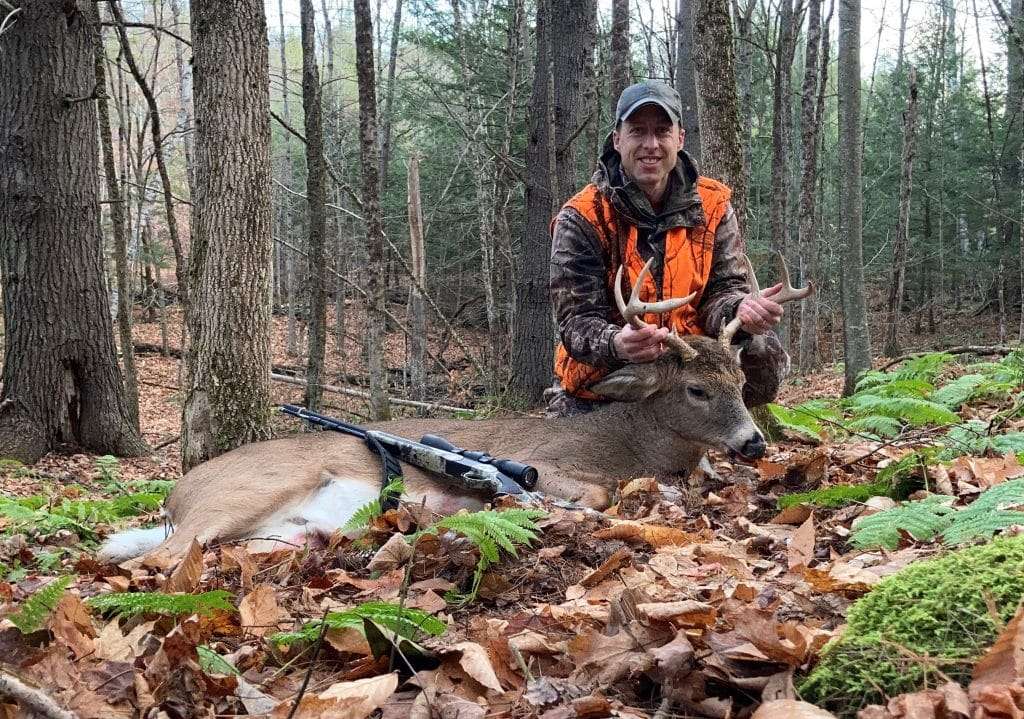 It is so nice when a plan finally comes together. After what feels like 200 failed attempts in a row, my hunt this past Saturday played out just how I envisioned it every other time I headed to the stand.

The older I get and the more kids I add to my proverbial quiver, the less time I have to hunt. I’m not complaining (well, maybe a little), but it has forced me to reevaluate my goals and how I approach each season. This year I have spent far more time scouting than hunting. Hanging cameras and changing them up has defined my season more than time sitting in the stand. To date, I spent one evening legitimately hunting out of a climbing stand. Other than that, I spent a couple of times wandering around the woods with my bow with a focus on scouting instead of sitting in wait.

There are times when I wonder if I am a slave to my cameras. Am I spending too much time on them instead of hunting? But when time to hunt is limited to an hour here or there, spending time locating the deer seems like a legitimate strategy so that on the days I have a little longer to hunt I can position myself better. My cameras this year have shown little buck activity, and even doe and fawn activity, compared to previous years. So much so, that each camera check pretty much verifies that those locations are not hot areas, at least at the moment. Ironically, the buck I harvested was an area I located by good old fashioned scouting techniques, a little bit of skill, and some luck in the moment of truth.

The bigger the woods, the more difficult it is to identify regular travel patterns for deer. I think there are general flows, but often those general flows are sporadic and wide ranging. If I had every day to hunt, I’d probably harvest a deer eventually if I sat in those areas, but I don’t. To that end, I’ve spent an increasing amount of time searching out “pinch points” over the last few years. Somewhere, even in big woods, there are areas that funnel deer.  In the Vermont town where I shot a doe a week prior with my muzzleloader, pinch points are defined by small patches of woods bordered by unnatural features, such as houses. Those are easy to define. Pinch points in larger tracts of woods are defined by often subtle natural terrain changes such as creek bottoms crossings, benches in rocky hillside terrain, blowdowns that corral deer a certain direction, or swamps – basically anything that forces deer to move through a particular area.  Even then it’s not a given that deer will pass through them but focusing on those areas is a better strategy than nothing at all.

Opening day of New Hampshire muzzleloader season was a week prior, and I found myself in a pinch point that I was also convinced was on a route to where deer were bedding. To my surprise, I saw five deer cross through it that morning – all does and fawns. Seeing five deer in one spot was more than I typically see in a week of hunting (or more) let alone in one spot. The following day, I found a fresh scrape there. It doesn’t take a genius to put it all together – does were at least using the area, bucks had obviously been there (though I didn’t know what time of day) and I was convinced bedding was close by. Plus, it was early November. I decided right then that any available time I had to hunt would be spent watching that spot.

The following Saturday, November 7th, the weather was unseasonably warm, but again – it was early November. Anything can happen. I was there at daybreak, sitting at the base of a hemlock after blowing out the flock of roosted turkeys overhead that had chosen the same tree. Apparently, it’s a popular spot.

I love using a grunt tube. Most of the larger bucks I’ve been fortunate to tag are a direct result of using a grunt call. I’m no expert in it, but when the stars align a simple grunt can create a lot of magic. On the other side of the valley I was overlooking was where I figured bucks were bedding – it was thick and gnarly territory. I was hoping that if any bucks were already over there, my attempts at grunting could draw them back. Three short, non-aggressive grunts at daybreak didn’t result in anything. Twenty minutes later, however, my next batch of short grunts did.

Here is where, despite my best efforts to sabotage the day, everything came together. Moments after I grunted, I was jokingly texting with a friend about how to be an expert grunter (I am not kidding) and looked up just in time to see a buck with a nice rack walking straight to me only thirty yards away. Had I been paying attention I would have seen him forty yards sooner. I instinctively put my phone down and shouldered my gun. The movement caught his attention because you know, he was only thirty yards away facing me by the time I saw him. On full alert now and staring right through me, I knew it was now or never and pulled the trigger. He dropped right where he stood. The whole encounter took less than five seconds from the time I saw him to the time he was dead on the ground. It felt a little surreal.

In the split second I saw his light colored rack as he was walking toward me, I had a brief fleeting thought that it was finally my opportunity to connect with a big, mature New Hampshire buck I’ve always dreamed about. As I looked at him lying on the ground from the base of the hemlock, I saw he wasn’t that, but he was still a very solid New Hampshire buck – a nice eight pointer that weighed in at 151 pounds.

Earlier that week I snuck out for a short morning hunt and happened to have a camera in my pack. Before leaving to go to work, I set it up in the pinch point with the hopes that I could confirm my suspicions. There was a concentration of tracks in one spot, one of which was rather large. I knew bucks were passing through there, but it was the time they were passing through that I really wanted to know. Were my suspicions right? After I looked over my deer, I walked over and picked up my camera, and low and behold there was the eight pointer I had just shot. He came right from where I thought he would. More excitedly, big brother was on the camera a few days prior right at dusk, and I still have an archery tag that needs filling. It might be time to christen my new Hoyt. If only there wasn’t this thing called work to get in the way…

When I’m fortunate enough to fill a tag, I like to think back on what made the hunt successful in hopes of being to replicate it in the future. I think the number one thing I did right was to make a conscious decision this year to spend more time scouting than hunting with the available time I had to spend in the woods. Trail cameras are helpful, and in this case they helped identify where the deer are not spending their time this year, but it was putting on miles and being willing to put in some extra effort that helped seal the deal here. Secondarily, my focus on hunting a pinch point dramatically increased my chances of crossing paths with a buck, especially during the rut when does are in the area as well. Using a grunt call at the right time was the key to making it all come together. Lastly, my unwavering ability to focus for seconds on end was critical to the success of this hunt. I wish I could have seen how big my eyes got when I looked up and saw him standing only thirty yards away. Oh well, at least it all worked out, but it does make me wonder how many I haven’t seen over the years… 😊

Well done, sir. 5 seconds is a worthy goal for an attention span that leads to killing a buck. Good luck with the archery tag.

Pinch points and grunts….sounds like me when I try to stand up after a few hours in my stand. Is moaning an effective strategy for calling deer?

Everytime someone texts me something deery happens. Keep up the good work. A fine deer. No more 4 letter words in your articles, you know, like WORK