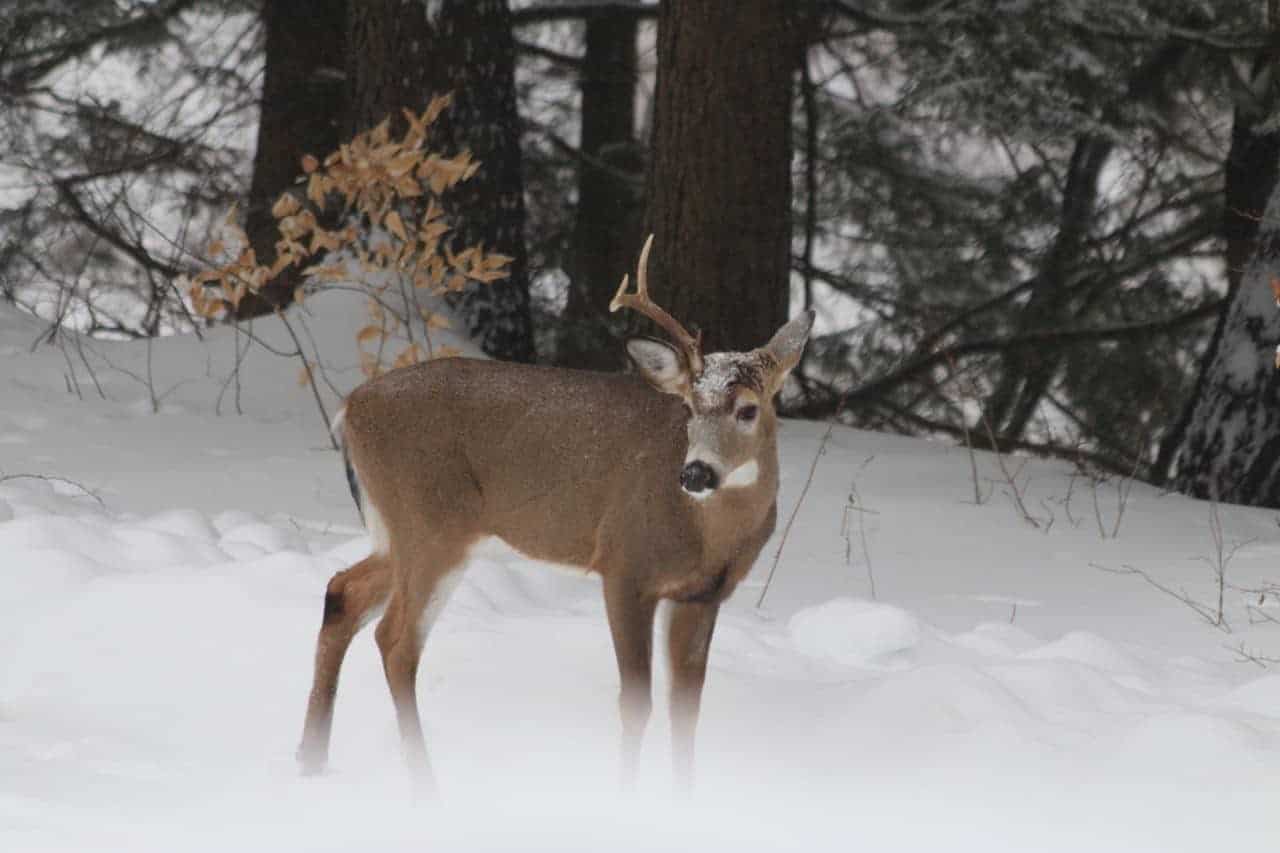 Recently, my free time has been consumed with dreaming about baitfish, passing thoughts about the coming spring turkey hunt, and February. Thoughts of February are enough to freeze the fun out of anything warm that could be taking place. There is something about this month that I have grown to dislike with a passion. It could be the cold, but it could also be the snow. It could be both.

February is to blame for the lack of stories that have been on the blog as of late. Writer’s block is what some call it, but not me. I’ve never considered myself to be a writer (my bad grammar and typos are a testament to that), so it’s fair to say that the blame is squarely a result of a general apathy toward life brought on by the month of February. It was only made worse earlier today.

This morning, an old, formidable foe has reappeared in the driveway of my friend’s house. He was kind enough to send me some wonderful pictures he snapped from his back deck. The buck looked familiar, so I filed back through my trail camera photos from last fall and found him right where I last saw him. On my computer screen. 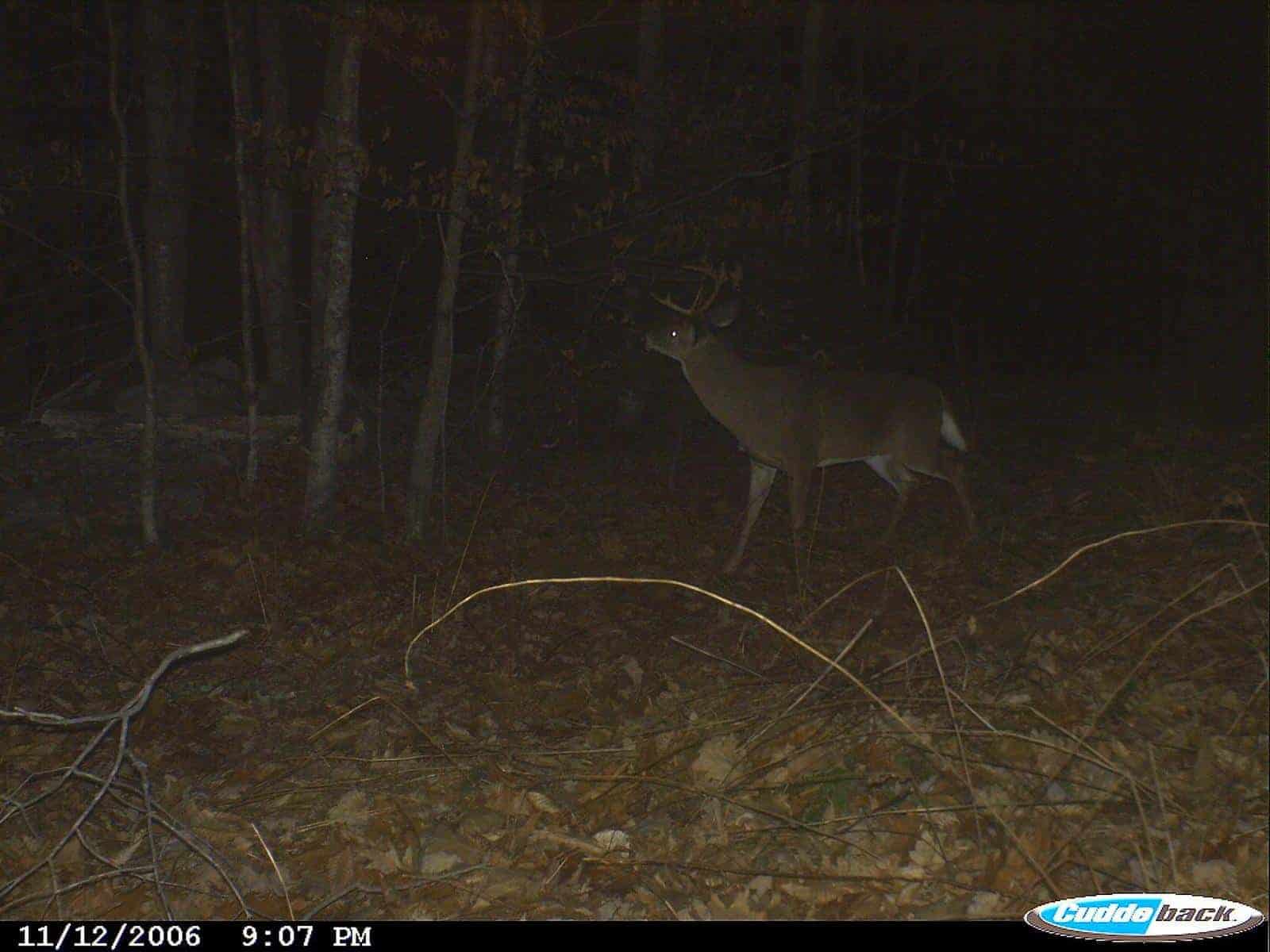 There he was, working a popular communal scrape hoping a doe would take notice. I find it odd that my friend spotted the fine buck hanging with a large group of does in his yard, but during the fall he burned all his fat reserves trying to catch up to just one. He’s a fool. Then again, love will do that to the best of us.

I normally do not name bucks. Mostly because I’ve never had a reason to. I suppose if I lived in the Midwest where I had ten different “target” bucks on my hit list it would make sense, but I don’t. I live in the northeast where any legal buck has the potential to become a target buck. Instead of naming them, I might refer to them as “the one with the tall spikes,” or “the big one that has two on one side and three on the other.” It’s simpler that way and makes me sound like a seasoned hunter.

But I’ve been thinking just now, perhaps I should name this one “Mr. Valentine” since it’s Valentine’s day and the last time I saw a picture of him he was looking for love. That sounds about right. He’s the first buck I’ve ever named.

Mr. Valentine’s pursuit of love reminds me of my own beautiful love story with my wife. You see, it was many moons ago that she became so smitten with me that I started my endless pursuit of her, hoping one day she would acknowledge me. She finally caved and agreed to go on a date with me to a local eatery where the food was overpriced but the atmosphere second to none. Nearby, the Tennessee River flowed peacefully and the stars shone bright overhead in the warmth of a summer evening. The restaurant we were at was not there, it was on a smaller stream that carried bits of trash through the town and overlooked the local park where the high school kids carved their love stories into tree bark.

Thus was the beginning of our dreamy love story. After splitting a salad, I spun her through the McDonald’s drive-thru for a more aptly priced dessert and took her back to the park to search for what the high school kids found so appealing. She passed on the McFlurry, but not me. This was the second of many miscommunications we would have over the years. The first was the salad we split for dinner.

As Mr. Valentine would vouch, each love story is unique, but there are many similarities as well. One minute you’re chasing after love and the next you’re sitting at the dinner table with your wife, five-year-old son and smelly dog. And that’s life. I wouldn’t have it any other way. Except for maybe a few of the miscommunications over the years and the putrid smell that emits from my dog periodically.

Tonight I plan to chase my wife around the house to relive the old days. I would venture to guess that her reaction will be the same now as it was back then.