Molly the Moocher and Other Cow Stories 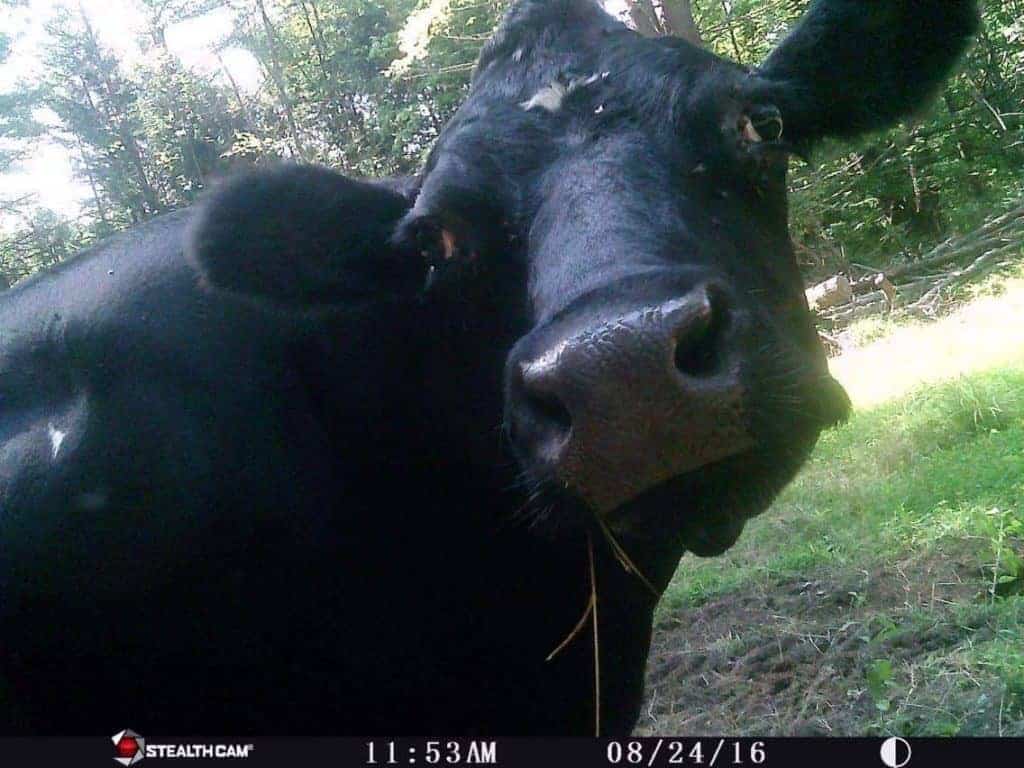 Molly the cow broke out of her pen and found the food plot 1/4 mile away and in the woods. Based on the trail camera photos from the scene of the crime, she enjoyed herself quite a bit before her absence from the pen was noticed. This is bad news for my friend, Christian, who recently spent a good amount of time tilling ground and replanting this falls bait, attractant, habitat enhancer for the local venison herd. It’s also bad news for me because my rank of number one moocher has been replaced by a cow. I haven’t even met this cow and already our relationship is off to a bad start.

If you remember, last year I spent some time perched above Christian’s hard work hoping to benefit myself. It’s not my fault; he invited me to hunt with him. On my first night I discovered then that I wasn’t the only one benefitting from his work. Porcupines were living the high life in his secluded little plot. I watched one chomp on the clover for a good thirty minutes before I climbed down for the evening. I didn’t see any deer, but there was evidence that they had been in the plot at some point, so I came back a few more times. Nothin. This year, it appears I’ll have to contend with Molly as well unless she ends up in the freezer by then.

My personal history with cattle is limited, having very little interaction with live ones over the course of my life. Aside from Molly destroying the one bait station food plot I have access to hunting over, my only other interaction with cows while hunting has been on trips out west. I can vividly recall one such interaction that began when I was stalking along a fence line to a vantage point that overlooked a small herd of 650 deer feeding in an alfalfa field. Midway down the fence line was a stack of hay bales that I planned to use for cover as I scoped the headgear on the males in the herd. The haystacks were about fifteen feet high and had narrow rows between them, along with a fence around the perimeter to keep cattle out. I hopped the fence and squeezed down the narrow passage way between stacks until I could see the deer grazing along in the field opposite of my approach. It was the perfect spot for glassing. 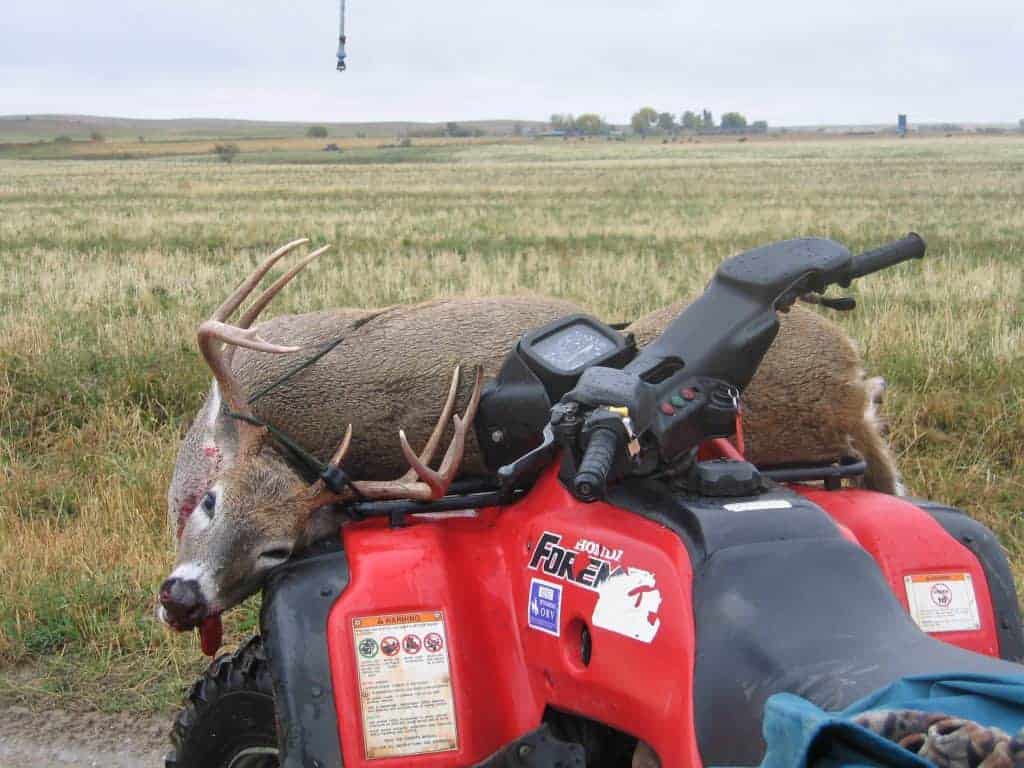 As soon as I had picked out the largest buck in the bunch, I surveyed the surrounding terrain and formulated a plan on how I could close the distance to within shooting range. I retraced my steps through the narrow walkway between hay stacks, and when I reached the end I came face to face with sixty head of cattle. They were big, and they were hungry. Their heads were stretched over the barbed wire fence and when they saw me they started mooing their fool heads off. Have you ever had sixty cows mooing at you from three feet away? The force of their breath practically pinned me to the hay bales at my back. I was startled, to say the least.

I deduced that the cattle had spotted me as I was sneaking along the fence line and then made their way to the hay bales assuming I was planning to feed them a bale or two. I never saw them on my approach – a real testament to my ability to be aware of my surroundings. Either way, I was in a real predicament. I could sense their frustration growing and grew concerned they might bully me around a bit.

The way I saw it, I had a few options to escape the hay bale prison in which I was trapped. The situation was complicated by knowing that my only safe escape was into the field where Mr. Big and 649 on his friends were grazing. If I chose that direction my life would undoubtedly be saved but my cover blown and the hunt over. It wasn’t a viable option.

I was armed, so shooting my way out was an option, but the rancher had kindly expressed to us that if we happened to shoot a cow we too would face death. He claimed to be a sniper back in ‘Nam, and the way he spoke left little doubt that he was telling the truth. Plus, I hadn’t read too many survival stories in Field and Stream of young Vermont boys shooting their way out of a hungry herd of cattle while hunting out west, and I thought it best I wasn’t the first. But I will tell you this, at the time they looked more like a herd of Cape Buffalo than regular cattle.

My last option was a Hail Mary. At the end of the fence row, not 40 yards away, was the exit I needed for a safe getaway. The way the fences from different pastures came together, the cows wouldn’t be able to trample me and the herd of deer wouldn’t be able to see me either. Gaining a momentary bit of confidence, I gave a juke move in the opposite direction of my escape route. The cows sidestepped with me, wrongly anticipating my direction of travel. I swiftly changed direction and headed for the gap. When the bovines realized they’d be duped, they regained their footing and reversed course, lowing and mooing after me the entire time. The fools. By then I had put ten yards between us and was closing in on safety.

I reached the fence and slipped through the strands of barbed wire. I was almost through when my jacket caught on a barb. With the cattle closing in on me, I frantically tugged at my jacket to free myself. It was like a scene from a bad horror movie. At the last second, I tore my jacket loose and somersaulted to freedom. The cows were devastated at the loss. As I walked away I could hear their lowing turn to sad moaning and a wry smile crept across my face.

Looking back, I guess it wasn’t really a big deal. I’m a better man for it.

Here’s hoping Molly doesn’t break out of her pen again. Deer season is only weeks away folks, better be dialing in those bows in preparation!

I found this article very mooooving.

Molly gives you guys free fertilizer and all you do is complain. ??

Fertilizing is one thing, trashing the place is another!