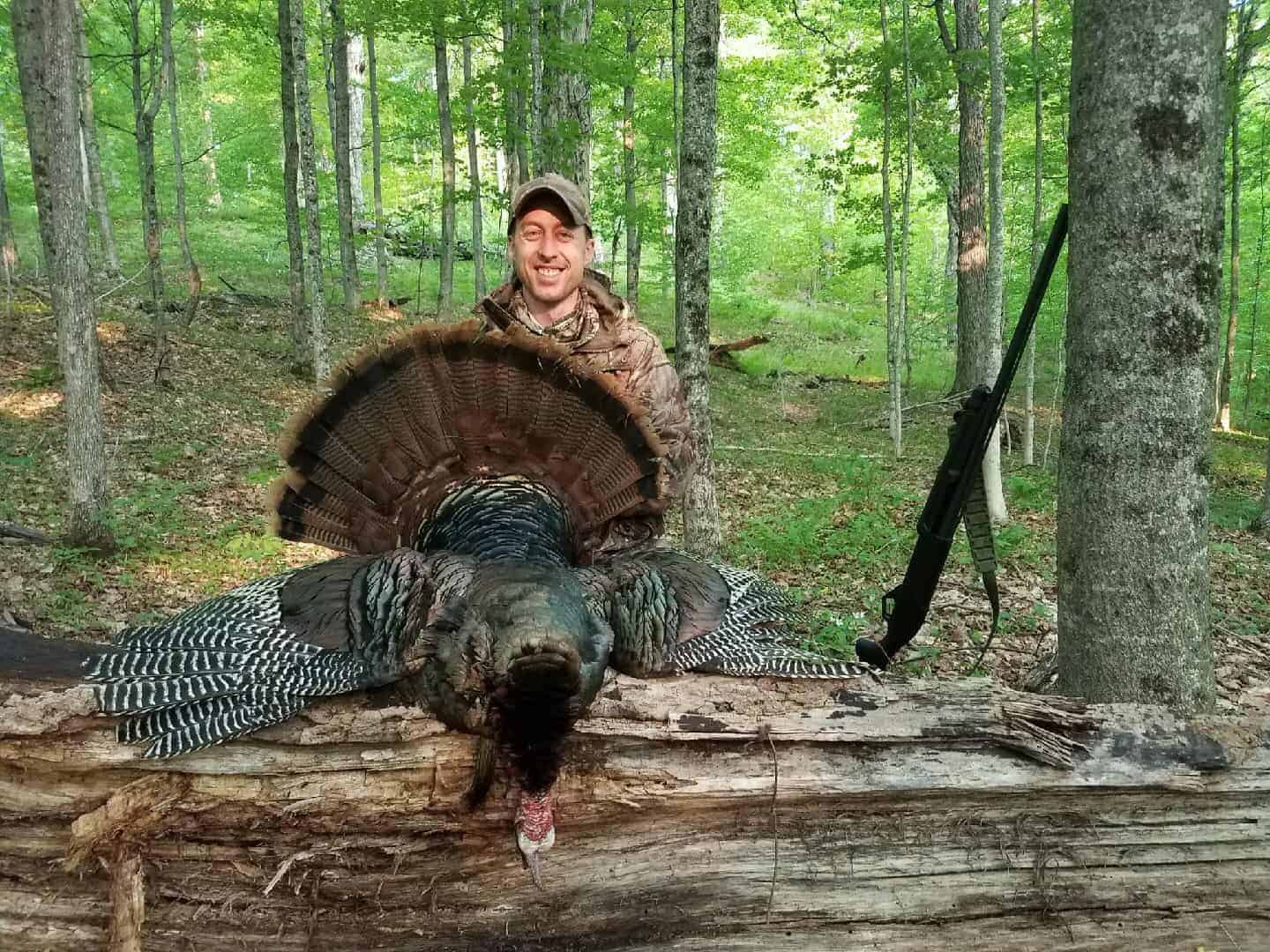 “It can be a challenge to get out of bed so early, but I never regret it once I’m out here,” I whispered to Brett as we hiked up a Vermont ridgeline with daylight just starting to crack over the distant hills to the east. There is just something about the beauty of a warm spring morning in Vermont that’s difficult to adequately describe to someone who has never experienced it firsthand. Deer hunting in the fall allows one a front row seat to the beauty of the woods transitioning from life to death. Turkey season brings the opposite experience.

It was late May, which meant legal shooting light comes somewhere around 4:45 am, and being in position well before that requires rolling out of bed rather early. That’s a normal challenge by itself but being on the tail end of a sickness that knocked me out earlier in the week left me with a little less energy than normal. Thankfully, when Brett called at nine o’clock on the evening before our hunt to tell me he had a bird roosted, I was only dealing with a headache that seemed intent on hanging around. They make pills for those anyway.

I was hunting with Brett Ladeau whose turkey resume speaks for itself. Notable accomplishments include calling contest victories in the friction division in Vermont, New Hampshire, Massachusetts, New York and Pennsylvania. He has also placed 4th at World’s in Arkansas in 2017 and 3rd at Grand Nationals in Tennessee in 2018. The man knows how to work a call, something that would come in very handy during our hunt later in the morning. He’s also the National Wild Turkey Federation (NWTF) Vermont State Chapter President and Upper Valley Longbeard chapter president. In addition, he is the much-deserved recipient of the Roger Latham Award for his volunteer work. The only thing missing from his resume, it would seem, is guiding yours truly to late season Tom.

I’d refrained for almost a year from begging Brett if he’d be willing to drag himself out of bed early for another hunt with me. Last year we gave it a go on the last day of the season with no luck because work got in the way of what could have made for a successful morning. I’ve often lamented over how work often gets in the way of a day of hunting. It’s just not right. This year, getting to work on time would also be our limiting factor, but with a bird roosted our confidence was high it would all come together before work had an opportunity to kill our fun.

I took a seat at the base of a big maple tree Brett affectionately refers to as the “killing tree.”  I have a few of these trees myself, though none of them achieved that notoriety due to turkey hunting success. My killing trees produce a deer about once every ten years, but I keep going back to see if lightning will strike in the same place more than once. I silently wondered if Brett’s definition of killing tree was the same as mine. A little while later we packed up and moved closer to the gobbler, confirming my suspicions about his definition. Hunters aren’t much different once you look past their resume’s.

The gobbler he’d roosted the night before had moved a considerable distance during the night for some reason, leaving us about 200 yards out of position at the killing tree. We moved further up the ridge straining to hear his gobbles through the sound of the stiff wind through the trees, eventually taking a new position at some no name trees and hoping Brett could entice the bird to come our way. It was not meant to be. After fly down his gobbles became increasingly more distant, and it was obvious the gig was up.

On the walk back to the truck Brett pointed out how many birds he’d killed or had a hand in helping kill along our path. In his life, he claims to have killed somewhere between seventy and a hundred birds, but I think he’s being conservative. This year alone he’s had to have killed close to ten across all the different states he’s hunted.

The clock read 6:00 am by the time we reached the truck, which didn’t leave much time to find another bird before we needed to leave for work. Since plan A didn’t work out, that meant it was time for plan B. Plan B is a tactic he introduced me to last year because Plan A didn’t work then either. The thought crossed my mind that maybe it made more sense on future hunts to skip plan A altogether and focus on plan B from the start. We could sleep in that way.

Plan B involved driving to properties he has permission to hunt, parking the truck and calling to distant hillsides to see if there was a lonesome Tom looking for love. If no gobbles were heard, we hopped back in the truck and went to the next spot, all the while watching the clock tick closer and closer to the time we had to leave for work.

Our last check of the morning was a small pull off on a dead end road bordering a field that dropped off to the southwest with a hardwood ridge that overlooked it to the east. No sooner had Brett stepped out of the truck than a turkey gobbled on the hillside before he could even dig out his call. We both looked at each other, then the clock and he said, “We have to try.” Fine by me. It was his job on the line, not mine.

We high tailed it up the hill to get above him and closed the distance as much as we dared without exposing ourselves to Tommy. His gobbles continued to echo through the woods as we crept closer and we finally picked a few trees to sit down at. Brett began calling.

Tommy responded but wasn’t moving, and we couldn’t get a visual on him which made it difficult to determine exactly why he was hung up. Suddenly, a hen appeared down the hill to my left about a hundred yards away. She eventually worked her way out of site to our left, leaving Tommy still gobbling hopelessly behind her somewhere. Once she was out of sight we took the opportunity to move closer to the crest of the hill. Brett called some more.

I remember a distinct moment when one of Tommy’s gobbles was clearly closer than all the previous ones. That’s when I partially peed my pants. It must have been something Brett said or didn’t say, but my heart rate ratcheted up a few notches knowing he was coming in.  The way he was working the calls I’m surprised every lovesick Tom in Vermont and the eastern edge of New Hampshire didn’t come in for a closer look. He gave Tommy everything he had – clucks, cutts, purrs, farts, yelps, and gobbles. The farts might have been mine, I’m not sure. It was a very nervous and exciting time.

Whatever he said, it worked. It was clear Tommy was moving closer to our location, albeit slowly, but we still couldn’t see him due to the terrain. We were in a great position to see down the hill to our left and were hoping Tommy would move across the hill in that direction. Unfortunately, based on the sounds of his gobbles he was angling uphill and slightly to our right. That was all fine and dandy, but it put us in a challenging position. His projected course would bring him within ten yards before we’d be able to see him, and he’d have the higher ground on us at that point. That’s exactly what happened.

No doubt ol’ Tommy put on quite a show as he strutted his way up the ridgeline toward us. Too bad he was the only one that could see it, but in the end, that’s probably what got him killed. If we’d been able to see him, I don’t think he’d been as curious to climb to the top of the hill to look for the very vocal hen just over the top.

His gobbles sounded thunderous as he closed the distance to ten yards and still wasn’t visible to us! Finally, he poked his wrinkly white and blue head over the hill and we could see he had a full fan, but I still had no shot because of a blowdown between us. An eternity went by and he eventually worked his way further to the right and behind a big maple tree, giving me an opportunity to swing my Benelli to the right in preparation for a shot. 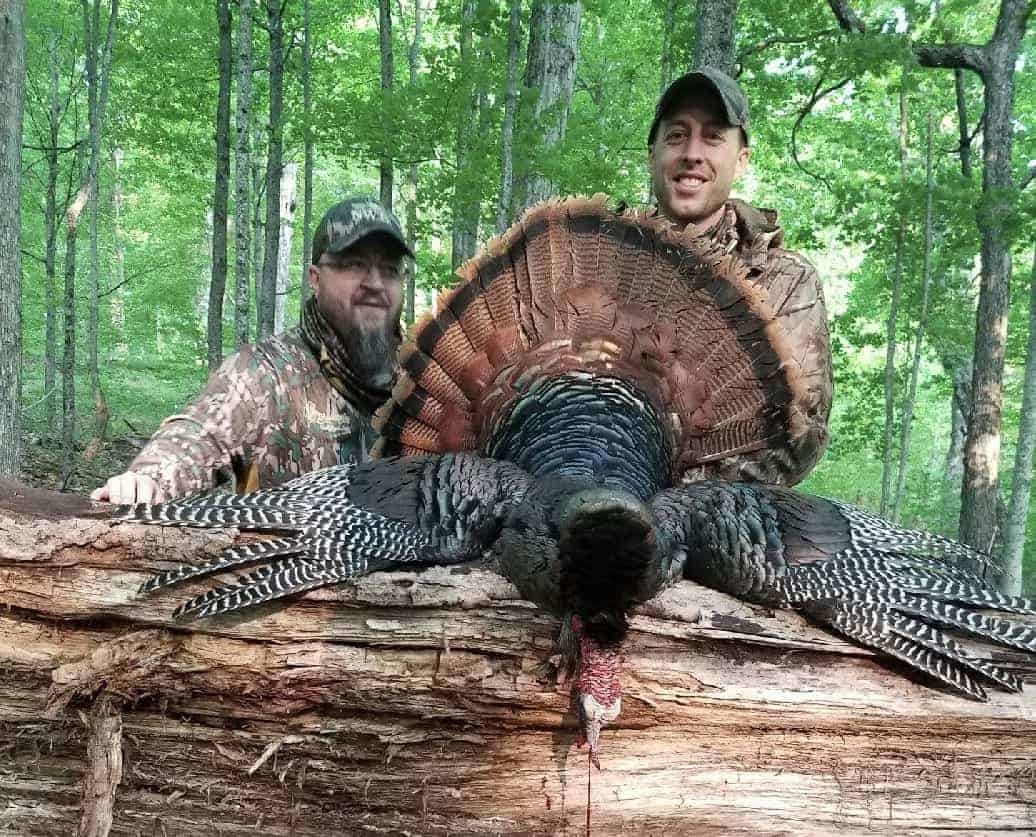 He was only visible from his beard and up when he strutted out from behind the maple, and he looked surprised by the funny looking hen sitting just behind me and to my right. Brett sounded pretty, but he looks nothing like a hen, and at such close quarters Tommy had him pegged. It didn’t matter because it was too little too late for the old bird. My Benelli roared, erasing Tommy’s last thoughts for good. The intensity of the hunt hung in the air for quite a while!

There was just enough time to snap a few photos before making a fast paced hike back to the truck where I admired my bird while Brett changed his appearance so no one at work would look at him funny. I think of all those people sitting in cubicles next to him who were none the wiser to an entire days’ worth of fun he’d already had before clocking into work, except for maybe that crazed turkey look in his eyes and the smell of the Vermont woods on his skin.

Until I recently starting hunting turkeys I never understood that look. I’ve always thought turkey hunters were a bit off, but I get it now that I have a few successful turkey hunts under my belt. Hearing the next bird gobbling during a Vermont daybreak is the cause, and I have yet to discover a pill that will take it away. I don’t plan to go looking for one either.

That’s a wrap on the 2018 Turkey Season, and what a season it was! Now the clock is ticking down toward to the start of deer season in September. Who’s ready?!