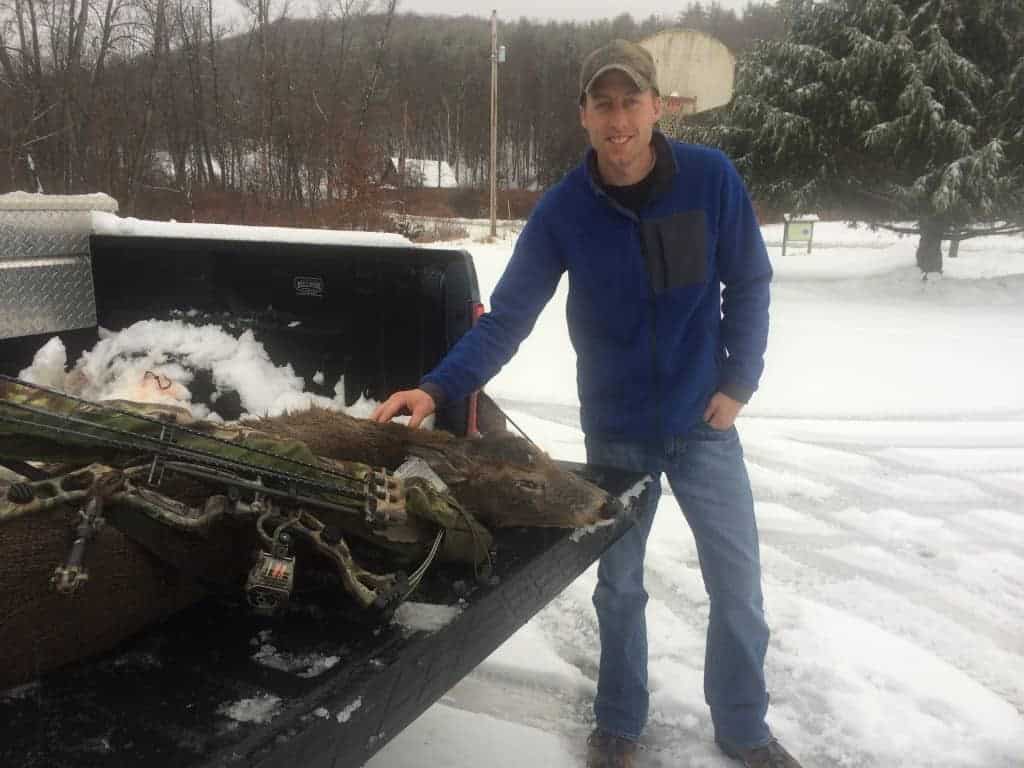 Last Friday afternoon I was able to finish up work with just enough time to race to my stand for a last minute bow hunt in NH. It was the night before the muzzleloader opener in Vermont and I was hoping the deer were moving before the incoming nasty weather the next morning.

I didn’t have time to change out of my work clothes so I threw my hunting jacket on over coveralls and hiked up the ridge to a permanent ladder stand we set up 4 years ago. We’ve seen many deer from the tree but haven’t been able to close the deal on many of them. I climbed up the ladder at 3:10 and hung up my bow and back pack on the tree hooks already in place. Just as I finished brushing the ice crusted snow off the seat I heard the sound of deer running. Much to my surprise I turned around and saw three deer crest the top of a small rise and run right for my stand.

I grabbed my bow and readied myself in case a shot opportunity presented itself. The deer milled around in front of me for about five minutes which was just enough time for me to convince myself they were all small. Of course, they weren’t, but after the events that have taken place this year I have lost all confidence in my ability to judge the size of a deer (unless it has a set of antlers on its head). Eventually, I was able to convince myself that two of the deer were full size and when the largest of the 3 stepped into an opening 18 yards away I drew my bow. I bleated and she stopped perfectly.

The moment I hit the release everything went wrong…

On the shot I thought I had missed. My bow limb hit a large branch that hung over the stand which kicked my arrow well off line – or so I had thought. Everything had happened so fast that I had not had the time to run through my normal routine of dry runs of each possible shot scenario to make sure I was aware of anything that might affect a shot.

My eyes had seen the arrow jump out ahead of the deer and it looked like a clean miss. I climbed down anyway to make sure and I was flabbergasted to find my arrow stuck in the snow with hair all around it. Then blood. Lots of blood.

“What in the world?”

I followed the blood for a while, becoming more confused with each step. Within 70 yards of the tree I found two beds coated in blood and massive amounts of blood in between. Without knowing where I hit the deer I was at a loss for what to do. The snow was crusty and loud so continuing to follow the trail was out of the question, especially since she had already gotten up twice.

After all of this I’d only been in the woods for 40 minutes! I decided to back out and give it some time. With the nasty weather starting by midnight I thought it would be best to come back out around 8 and find her before the snow started falling.

A friend of ours, Carl, happened to be hunting a couple hundred yards away and he texted me to tell me had seen 3 deer run by. “Bummer,” I thought to myself. Knowing that it was likely the same 3 deer I had seen I was hoping that only 2 would have run by him.  When he climbed down at the end of his hunt he inspected the tracks for blood and found some which gave us a head start later that night.

Carl and Dad joined me later that evening and we picked up the trail where Carl had last seen blood. To spare everyone of the details, we finally found her an hour later down in the bottom of a long hill. A steady snow had started falling by then and it took us almost two hours to get her back to civilization! She only weighed in at 113 lbs which was strange because when we were halfway back to the truck I had her figured at 431 lbs. It’s tricky judging the size of these deer. 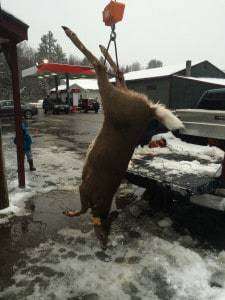 It was certainly a night to remember. I couldn’t be more thankful to Carl and Dad for being willing to come help me find the deer, otherwise I think I’d still be out there covered in ice and contemplating the meaning of it all. In the end it wasn’t so bad really… Dad almost had a heart attack, Carl lost his phone, and I had to sacrifice my opening morning of Muzzleloader in Vermont so I could take care of the deer. There was one small victory in it all though – the Meriden Deli Mart has the most incredible homemade donuts and for $3.00 I bought two of them along with a medium Green Mountain coffee. I’ll be back there soon – deer or no deer.

In all seriousness, I felt bad for the deer. That is NEVER the way it is supposed to work. Quick, clean kills are what we all hope for but sometimes things happen that change your best laid plans. Fortunately we found her. Next time I’ll make sure my bow has ample clearance from any overhanging limbs.