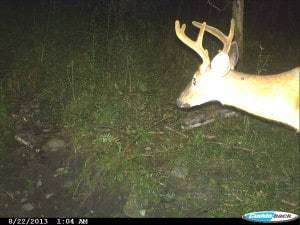 This past Sunday I was able to get out for one last preseason scouting trip before the season opener. It was a perfect day; the temp was in the mid sixties with a stiff wind that kept the mosquitoes away. I made the typical loop around to check trail cameras that Josh and I had set up a month and a half ago. I had already checked them three times. The first check after a two week wait had resulted in one six point buck and a spike along with a number of does and fawns. That’s not a lot to get excited about but at least there was one buck that had a small rack. After that the buck sightings were minimal and no new bucks were captured on film. But, on this particular day I was pleasantly surprised to capture more bucks on camera which confirmed my original thought about the deer movement this year.

My strategy has remained the same during every time I have been scouting. Having limited time to scout meant that I have stuck to the same area every time. About 300 yards from the main feed source (apples) there is a small secluded apple tree that happens to have apples this year. The tree is situated in the middle of a dry creek bed and when it bears fruit the deer seem to tailor their travel patterns by this tree. A number of windfalls over the past couple years have also helped funnel deer towards the tree when they make their way to feed at night. My hope is that the bucks would feel safe enough to stop at this tree in the daylight before heading to the other apples well after dark.

I have long been intrigued by this tree although the only deer killed close to it was at least 100 yards away and well out of sight. (It was also not very big. That particular fact is not mentioned too often and fortunately I was not the one that shot it.)  It’s not exactly a big producer. However, I have never hunted it during early season archery which is the time I think it would be most effective. It will be difficult to get a shot more than 30 yards and because of the lack of leaves on the ground along with all the leaves on the trees, the deer will be able to get right in close before I can even see them. 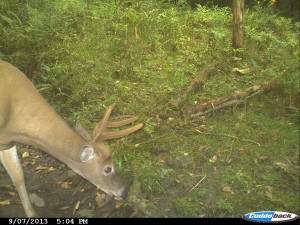 Finally a picture in the daylight.

This Sunday I’ll hang my stand. I was hoping to get it hung this past weekend but I just didn’t have enough time. So, hopefully I’ll be able to sneak down in there early afternoon and get everything set up without disturbing too much. The deer are definitely there so as long as there are apples left on the tree I think I’ll have a chance at seeing a buck to shoot.

What I learned: Trail Cam photos revealed that bucks are starting to visit the apple trees now that the apples have started to drop.

What I noticed: All the apples are out of reach on the trees. Coincidence? I think not.