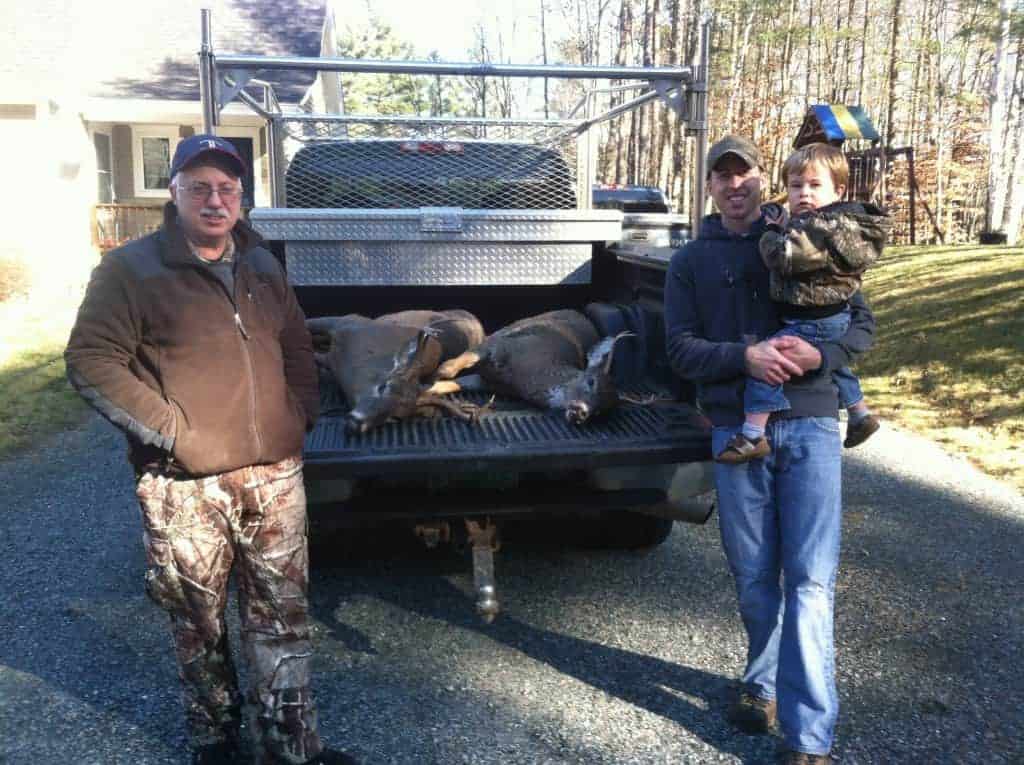 Like most young hunters in Vermont I was taught to shoot the first legal deer I saw. Three inches of antler on one side was all that was needed to have the green light to pull the trigger. It was fun.

I spent most of my childhood approaching deer season with this mentality. Each season I entered the woods I planned on shooting the first buck I saw. My view of deer season was similar to my view of deep sea fishing shoulder to shoulder with 40 people crammed into a 40’ boat. All the lines are dropped within a 400’ square foot area 300’ down on the ocean floor. Someone always gets lucky and pulls up a big one, most catch something of average size, and some go home empty handed. Deer hunting in Vermont was no different. A few people shot big ones, some shot spikes and four points, and most went home empty handed. It came down to the luck of the draw. Whoever was in the right place at the right time was the lucky one and shooting a big buck was like hitting the jackpot in a lottery that had low odds of winning. It was fun.

Somewhere around my college years the modern day deer management doctrine woven into hunting shows caught up with me and I began to realize that I didn’t need to shoot a deer. Among other concepts, I learned that letting the little ones walk would increase my chances of seeing a bigger deer the next year.  Brilliant! I put my new found beliefs to practice on a trip home from college one Thanksgiving. I had three days to hunt and on the last hour of the last day I saw a spike horn. This was before the “no spikes” rule in Vermont and he stopped broadside in the middle of a logging road. I had ample opportunity to shoot but held off. “I don’t need to shoot him,” I told myself. “Let him grow.”  I’d arrived at a new destination in my hunting career. I’d started to not be as much of a taker each time I entered the woods. It was fun.

Over the next five to eight years I hunted with the same mentality. Vermont had instituted the spike rule (which I fully supported) during that time and I’d passed on a handful of deer. One evening in early November I found myself perched high up in a tree just across the border in New Hampshire. It was archery season and one of my favorite times to hunt with a bow because the bucks are receptive to calling. The Primos Can Call is always a hot ticket that time of year and just before dark I heard a deer walking in the dry leaves after a calling session. A buck! He stepped into view from behind a few small hemlocks and closed the distance fast. I could see he was only a spike and decided to watch him. Our trail cameras revealed many larger bucks in the area (although they only seem to exist between midnight and two am) and letting him go seemed like the thing to do. “You can’t shoot a big one if you shoot a small one,” I reminded myself. He walked past me and out of sight towards a common food source, though he never left hearing range. He trounced around for five minutes and then came back. He passed by me two or three more times before I finally realized what was taking place. He was looking for the doe! Had I shot him right away I would never have experienced his behavior and learned what I learned. It was fun!

Then, a few years ago I started to grow weary of this style of hunting. It’s not that I started to disagree with the approach; it’s that I began to experience the negative effects that come with it and I begin to understand that some of the joy was being taken from the hunting experience. A defining moment of the paradigm shift in my approach to hunting was when a local reporting station posted a picture of a young girl posing with her youth season deer as it lay on the scale. It was clearly a young deer, the sort of deer I refer to as a “crock pot deer” because the whole thing could fit in a crock pot. (I’ve been there.) It didn’t bother me that she had shot such a small deer. In fact, I was happy for her. What bothered me were the ruthless comments posted by “expert” deer hunters blasting her and whoever had allowed her to shoot such a small deer. Obviously they were poor managers of the herd and this young girl was being taught totally wrong. It was sad.

I began to miss the days when the hunt was celebrated instead of scrutinized. Successful hunters used to be congratulated not reprimanded. Vermont has a long and storied hunting history, one of the longest in the nation if I remember correctly. From what I can tell there has always been a deer herd, though it fluctuates in size from time to time, and now this poor girl was single handedly going to be the demise of a 110 year tradition in the eyes of many because she had shot a young deer.  “How did we get here?” I asked myself. “More importantly, where are we headed?” The comments on her picture caused me to take a closer look at myself.  It was difficult.

Not only did I realize I was one of them, though I rarely verbalized those feelings to others, I also realized that each time I saw a deer I questioned whether or not I should shoot based partly on feelings of guilt. I’d come to believe that I too was part of a larger management problem if I decided to fill my tag on a legal, albeit small, buck. Some of my joy had been lost. Don’t get me wrong, I was still having fun in the woods, but it was a different feeling than I remember as a boy. I was tired of telling myself each time I entered the woods that I didn’t need­ to shoot a deer. I already knew that! But I finally recognized that I liked to shoot deer and that it is OK.  I also understood that just because I liked to shoot deer didn’t mean I had to shoot every one I saw, but it did free me up to shoot deer because I wanted to and not to feel guilty each time I chose to fill my tag. Perhaps this is partly because I have a son of my own now and in this neck of the woods, where filling a tag is not an easy thing to do, I want him to experience the sight of a deer in the bed of pickup truck or taste fresh venison after sizzling it in onion and butter on the stovetop.  Better yet, when he’s too young to join me in the woods and has to wait at home, I hope he experiences the excitement I felt when I was a little boy and knew my dad was out hunting and might actually bring home a deer. There is much more to hunting than shooting only big bucks. It was a valuable lesson.

Now, before you start thinking I’m just a trigger happy fool who cares not about the deer herd, consider that I choose to hunt rifle and muzzleloader in Vermont in a place where the deer are few and far between. In fact, in the fifteen or so years that we’ve hunted there we have only taken seven deer combined between three to four hunters. Those are not good odds, so why do I hunt there? I hunt there because I like the opportunity to hunt bigger bucks. I mentioned earlier that I don’t NEED to shoot deer. If I did, I wouldn’t hunt where I do. On the other hand, I tend to hunt areas that have a few more deer during archery so I have a better chance at putting some meat in the freezer. Do I need the meat? No, but I do LIKE the meat. I like scouting for it, hunting it, field dressing it, butchering it, and eating it.

Two years ago I had similar experience with a spike horn like the one I mentioned earlier. (Read that story here.) It was the prime time of the year to call for bucks and it was so quiet that sounds seem to carry forever. Just before climbing down I heard the familiar sound of a deer walking in the leaves after calling one more time. As the noise grew louder I knew in my gut it was a buck. When he finally came in to view I saw that he was only a spike. Decision time. A busy schedule doesn’t allow for day after day in the woods and I was happy with the accomplishment of calling in a buck in New Hampshire – even if it was only a spike. So, unlike the previous time I called in a spike I decided to shoot this one. He stopped broadside and I released an arrow. After retrieving my arrow I called family and friends to let them know…and it was fun.

Wait! One more thing – if you liked this post or some of my others please share! Thanks!