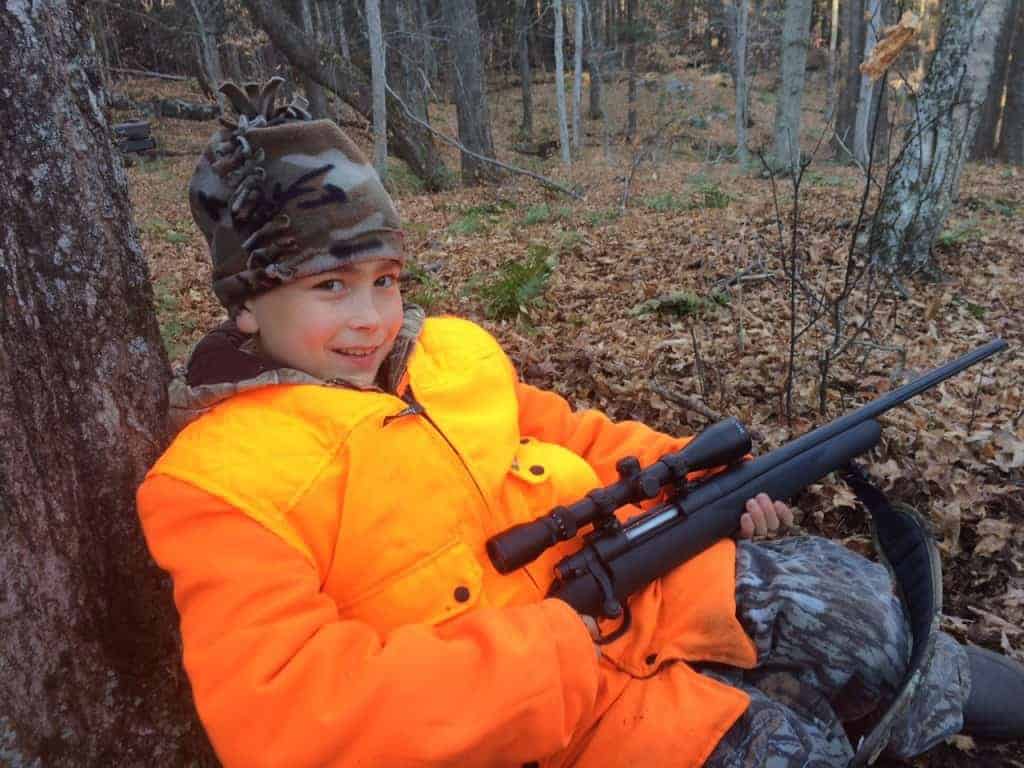 Fresh off an exciting and successful hunt with Gannon the day before, I offered to take young Noah out for an evening sit on the last day of youth season since his dad, Christian, had to work. When I arrived at his house to pick him up he was already dressed and ready to go, his rifle over his right shoulder and two hot seats in his left hand. “One is for you,” he said smiling as he climbed into the truck. I thanked him and as I shut the truck door I heard him reply, “No problem, Bro.”

“No problem, Bro?” I thought to myself as the door latched. “Do ten year olds talk like that?”

This one does. Actually, he talks quite a bit and had a lot to say during our two hour hunt. Little did I know I was in for a real treat. On the ten minute trip from his house to the property we were hunting we discussed many things. Well, Noah discussed many things. His excitement was palpable. “Where are we sitting? Will we see deer? I know what to do if I see a deer. I’ll shoot it behind the shoulder. I hope I see a deer tonight. You think we will? How far do we have to walk to get to the stand? When should I load my gun? In the yard or when we step into the woods? Should we shoot a squirrel if we see one? (Noah loves to hunt squirrels.) I’m going to gut my own deer without wearing gloves. Do you think we will see a deer?” I could go on, but I think you get the picture.

I put the truck in park, and after reviewing the finer points of gun safety we headed into the woods. I’m one of those guys that likes to slowly sneak to the edge of a hill and peak over in hopes of spotting an unsuspecting deer below. As his guide, I felt it was important to teach Noah a few of these such tricks I’ve learned over the years. “Stay here. I’ll sneak to the edge of the hill and peak over real slow.” The crest of the hill was not more than ten feet away so I thought this would be a simple process. Just after I’d taken my first step I heard a commotion in the leaves behind me. “Noah, stay here while I sneak to the crest of the hill and take a look over the other side.” I reminded him.

I turned around and took another slow, methodical step towards the crest of the hill. There was commotion behind me again. Unable to put any distance between us, I suggested we look over the hill at the same time which seemed cool with Noah. There were no deer over the hill. I don’t know if there were before we started our approach either.

We continued on to a great little stand site which overlooked a ravine that drained into a swamp below. In the evenings the deer come down off the hill above where we were sitting and meander down the ravine. I had Noah practice getting ready for an approaching deer so he would know what to do in the event that we actually saw one and then we settled in.

A chipmunk hopped onto a long not 30 yards below us and started clucking. “Try getting into position without scaring him,” I suggested, thinking it was a great way to practice for when we saw a deer. He did a fine job and then asked if I wanted him to take the shot. “Easy there, Gunner.” I quickly responded. “We’re here to hunt deer. Let’s just watch the chipmunk and see what he does.” Noah’s breathing returned to normal. So did mine.

An hour or so into the hunt, one of the rare moments of silence was broken when Noah began lecturing me on the finer points of the whitetail deer reproductive process. “Do you know why the bucks chase the does?” he asked. He answered his own question before I had a chance to respond. I was amazed at how succinct, yet thorough his explanation was for only having ten years of life to amass such knowledge. At the end of the lecture he left me with a thought provoking question. “Do you think the does like it?”

I answered with a question of my own. “If they do, why are they always trying to run away?” Silence returned to our hunt as the young professor sitting beside me quieted down and pondered my question for some time.

A little while later, the unmistakable sound of deer walking through the leaves behind us snapped my mind to full alert. “Noah, get ready!” I excitedly whispered. We both maneuvered into position – Noah put his gun on a rest I’d made for him, and I fervently searched the woods with my binoculars to find the source of the noise. “This might just happen.” I thought to myself during the intensity of the moment.

“Hey,” Noah whispered. “Have you ever heard of the tradition that when you shoot a buck you hang his balls over a tree branch when you gut him out?”

“This may not happen…” I thought to myself before offering a reply. “Yes, as a matter of fact I have, but I haven’t participated in that tradition for some time.” He seemed both pleased and disappointed with my answer. I considered asking him if he’d heard of the tradition of being quiet while hunting for deer but didn’t want to take away from the moment – I was learning too much.

Much to our mutual displeasure, I eventually identified the noisemaker to be a gray squirrel. Noah sacrificially offered to shoot him so we wouldn’t be fooled again, but a gentle reminder that we were here to hunt deer was enough change his mind. Evidently, the risk of being fooled by a gray squirrel again was worth the reward of possibly seeing a deer.

Once again I heard the unmistakable sound of a deer walking in the leaves off in the distance. The light was fading fast, but Noah was ready for the moment the deer stepped into view. It wasn’t meant to be. We watched the minutes go by until legal shooting light ended and the deer stayed out of sight. Noah was bummed and also angry at the time change. He was convinced that the time change the night before had cut an hour of daylight out of the day. As the deer milled around just out of sight I tried to reason with him that we had, in fact, not lost an hour of daylight and that the deer were still moving at the same time relative to dusk. The daylight hours had only shifted. As hard as I tried I could not construct a verbal bridge strong enough to span the mental divide that existed between us. My explanations about how the time change works proved futile. We did agree on one thing though – that the time change is stupid – and I resolved myself to being OK that we had different reasons for feeling the same way.

We packed up our stuff and headed for the truck. Sure enough, we weren’t ten feet from our makeshift blind when we heard a deer take off. Neither one of us had to say anything to communicate what we both knew to be true. No doubt that was a buck running away. The Teacher and the Pupil were finally on the same page. I was proud. But I’ll be honest, two months after our hunt I’m still trying to determine if I was the teacher or the pupil.

Have you ever taken a kid hunting? If not, you should. You might just learn a thing or two! 🙂