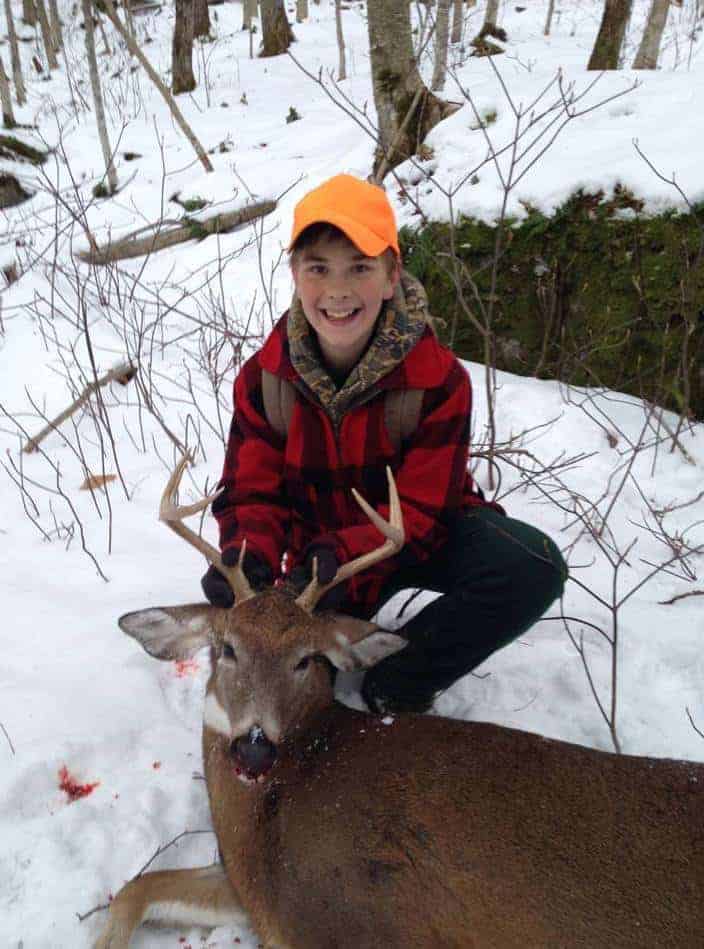 Our morning started out in one of our spots that we usually hunt every year. Soon after entering the woods we split up as we worked out way through the trees. I was trying to jump something down to Matthew but that didn’t work and we came back together on the trail.

We started back up the trail and looked up on the side hill in the oaks about 150 yards out and I noticed a deer with his head to the ground cruising. I told Matthew it was a buck that he should get ready. He came within 40 yards and picked his head up when he stopped by a log picked. It was a 1 horn spike about 8″ long. The other side was completely broken off. Matthew was so bummed and couldn’t believe why that didn’t happen during youth season. I said it wasn’t meant to be and we continued with the hunt for the morning. 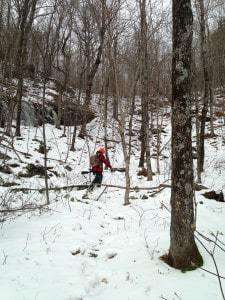 In the afternoon we headed for my buddies camp in Huntington, Vermont that I’ve been going to for 20 years and now my son is also hooked on camp and has been going for 5 years. We pulled into camp around 1:30 and Larry was already getting ready to head out. So we grabbed our guns and headed out for the afternoon hunt too. Matthew and I crossed a few tracks here and there on our way to the top of the ridge. At the top we cut a buck track and started following it for a ways. All of sudden it cut and went straight down. It was starting to get late so we gave up and started to hike back towards camp.

We started coming down the trail and about 75 yards out I noticed a deer. I told Matthew, “Deer!” He told me he couldn’t see it I reassured him it was there and to be ready. He walked out I noticed the fork on the main beam. I told him it was legal and to take him so I put my gun down but he didn’t have a shot and he wanted me to shoot before he got away. I pulled up and shot and dropped him in his tracks.

I told Matthew I was sorry because I really wanted him to shoot it but he was just happy the deer didn’t get away because he didn’t have a shot. When we reached the deer it was still kicking I told him make sure too poke him the butt first so if he jumps up you won’t get poked with the antlers. Once he poked him pure excitement broke out and his face lit up like a Christmas tree. He was yelling, “Dad, we got a nice mature 8 point! Dad, we got a nice mature 8 point!” Then he called home and told his mom the same thing only she didn’t believe him even though he told her he was kicking it in the butt! So they Face timed and he showed her. After that she was just as excited as us!

In the picture above he’s just excited as if he shot it himself. You can tell by the smile and the glow on his face. We finally got the deer back to camp and found Larry who was about to go look for us because it was getting dark. Our radios finally worked just before we get to camp. It was a great day Matthew and friend Larry. Memories will last for a life time so take the time to take a kid hunting and teach them whatever you can. They are the next hunting generation and we need more of them in the field. Matthews thirteen now and has been hunting with me since he was seven and has been going with me on deer recoveries since he was 2. The memories I’ve made with him in the woods will always have a special place in my heart. 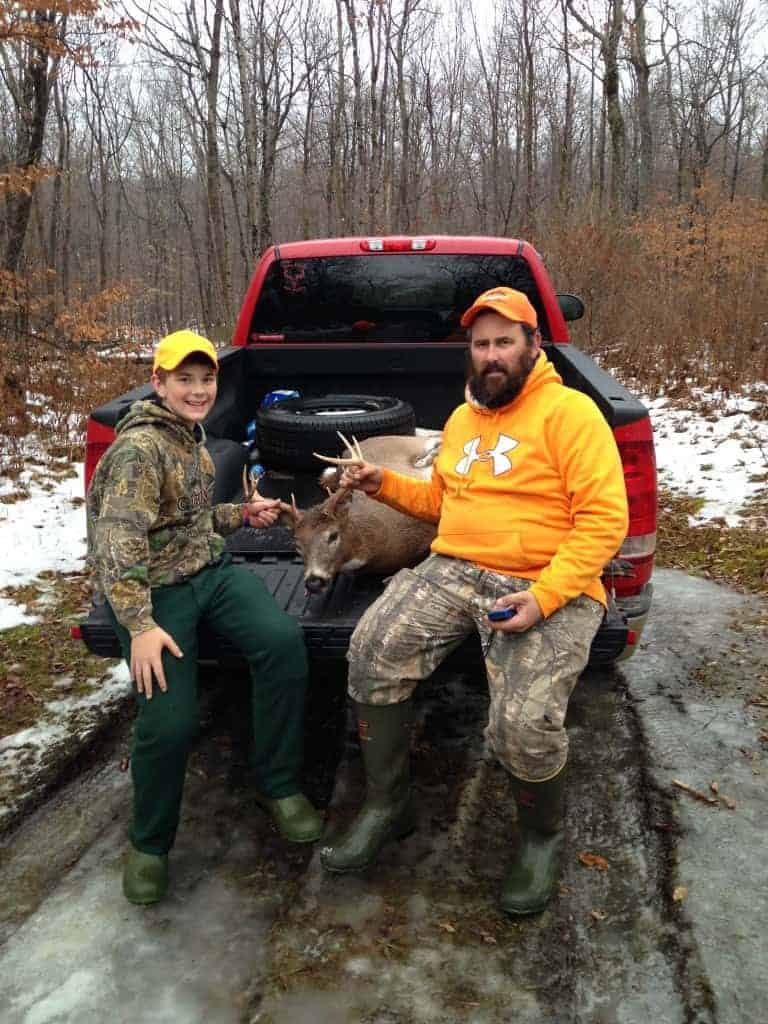