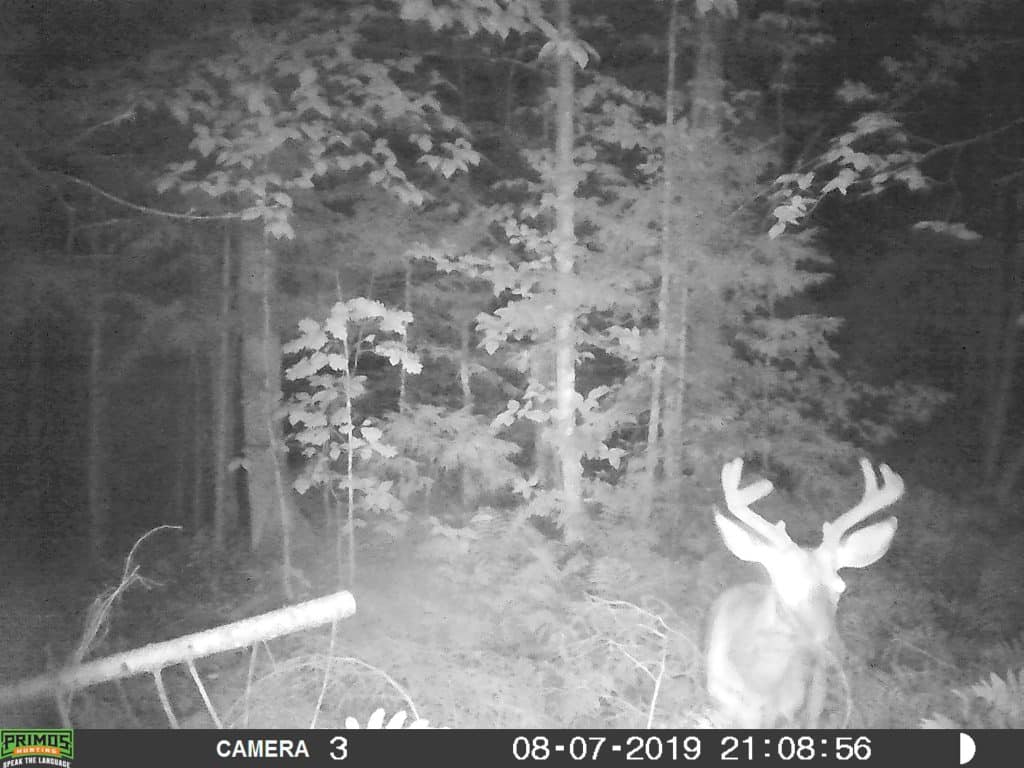 Yep, it’s here. Hunting season. I watched it coming all summer long and just like that, it’s here. Am I prepared? No, I am not, but that’s not all that uncommon this time of year. I have a lot of excuses for that, most of them no one cares about.

I have managed to spread out some trail cameras in various towns around Vermont. Other than big, fat bears and two young bucks, I have yet to come across anything exciting. One of the bucks could be a three year old. That’s a guess, but I like saying it because it makes me feel better about myself, especially as a famous outdoor writer. Famous outdoor writers cannot be clueless when it comes to aging bucks on the hoof. They must know and they must be confident in their knowing. Plus, what good would it do to tell people I don’t even have a buck at least three years old to hunt? Who would even pay attention to me at that point?

It’s possible he’s only two. I’m not sure. Frankly, I don’t care.

I have noticed in my travels into and out of the wooded areas of Vermont that there are a lot of acorns and other various nuts, as well as a lot of apples. This is disappointing.  Less than a year ago, I wrote a letter to New Hampshire Fish and Game specifically requesting one or the other for the 2019 season. Only nuts or only apples but not both. It’s going to be basically impossible to pattern deer this year. Then again, I haven’t scouted anywhere in New Hampshire yet, so I should reserve judgment on the officials over there until I see firsthand what the food supply looks like. Probably I should take a look soon if I hope to fill some tags.

Speaking of New Hampshire, my season opening hunt is in jeopardy. My wife has a big test to recertify for some work-related thing a few days after the opener and she claims it’ll be important for her to be studying as much as possible leading up to the test. I’m planning to purchase a bonus point for a 2020 Wyoming elk tag out of spite. It’s only fair.

This hunting season is going to be different for me because Sam is old enough to hunt youth season. He passed Hunter Education earlier this spring and has been practicing with my ol’ youth model .243. I’ve killed many deer with that gun – little ones and big ones, and I still hunt with it now. My focus will primarily be on him this year, except when it’s on me. I can’t wait. Youth season can’t come fast enough.

A month ago, I mentioned that I was trying out a few new trail cameras I’d received for Christmas presents last year, and also I few I’d purchase for myself as Christmas presents. Four of them are Primos Quickshot cameras that I picked up for around $20 each. They operate about like you’d expect a $20 dollar camera to operate. Daytime pictures are decent, and the range is too, easily exceeding the 60’ range listed on the package, at least when I was mowing my lawn. They captured me out to 73’.

I like using cheap cameras because I don’t have to worry about them getting stolen. I put one out on a new property I gained permission to hunt last week, and two days after I set it up I had someone standing in front of it with a dog. At least he didn’t steal it, but if he had it wouldn’t have felt like as much of a gut punch had it been one of those $200 types.

Nighttime pics leave a little to be desired. They are very grainy and the range isn’t nearly as good. I got a cool video of three unusually sized rodents walking down a stream that would have been much cooler had the video been clear. Some say that they don’t exist, but I know they do. I’m confident of it – I am an outdoor writer after all. Outdoor writers must be confident.

What the camera has done for me is verify that deer do exist in the area, they like to move during the hour before dusk, and the guy and his dog like to walk about midday. I wasn’t looking for much more than that from that particular camera. Another benefit to cheap cameras is that they don’t often tell the whole story, so I get to fill in the rest with my imagination. For example, I got a video of a deer that sure walks and looks like a buck from the neck down, but it’s a night video and the head is never clearly visible. I am confident it’s a monster buck. Outdoor writers must be…. ah, never mind.

I am confident that hunting season is upon us and that has me daydreaming about coming days in the woods, sitting on stand for long hours daydreaming about seeing something….anything. There is a lot of daydreaming about to take place. That’s just the way it’s going to be for the next three months. Hopefully those around me will understand.