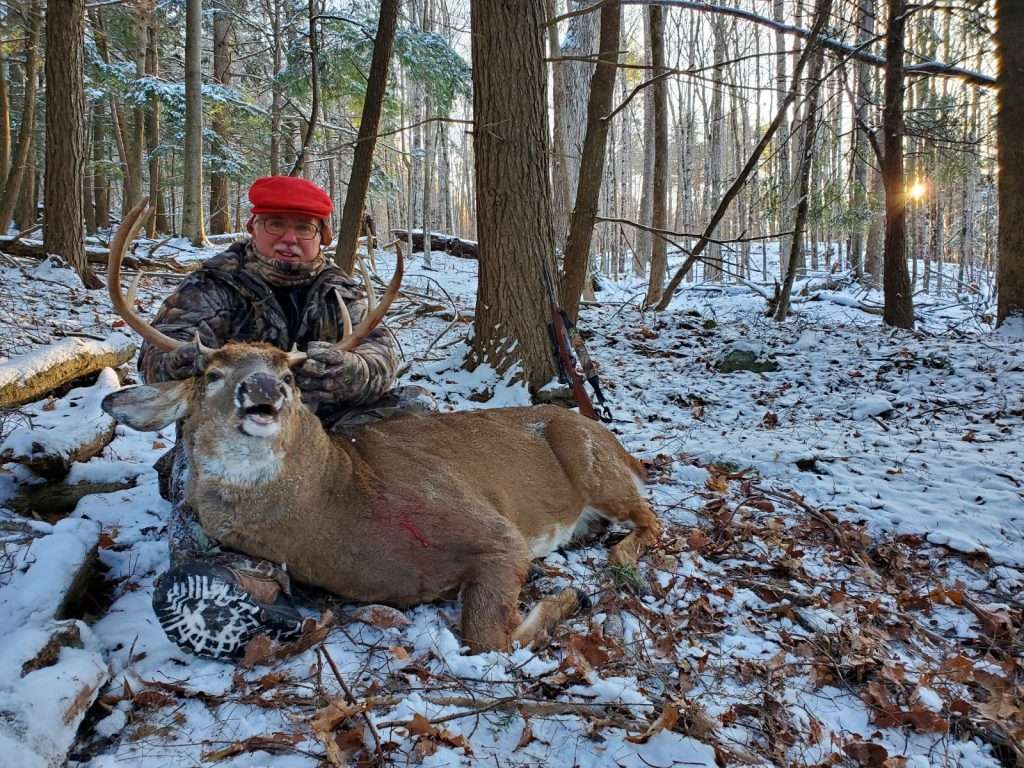 It was late March of this year when my dad and I found ourselves standing on a hardwood knoll in the New England woods replaying the chain of events that led up to him taking his largest buck in a lifetime of hunting. I remember taking his call barely after the retort from his rifle had subsided, “I just got that big 8 pointer!” Now, barely five months later feeling was completely different as we relived the moment. “Do you think God gives us those memories to help us smile during times like this?” he asked.

The weight of the past three months hung heavy in the air, but the brief reprieve from the heaviness of life to relive the memory of that happy morning did too, and I am pretty sure I smiled at some point.  “I’m not sure about that,” I said, “but if so, it’s working right now.”

The buck was one of the few bucks I actually had a history with dating back three years prior. Most of the bucks I’ve been fortunate to capture pictures of are typically around for a season, maybe two, or they show up during the rut from out of nowhere and disappear again when it’s over. But not this guy. For whatever reason, his home range overlapped mine and he was no stranger to the camera. He grew a rack every year that had the same basic frame and was identifiable by an ever so slight “squiggle” at the end of the left main beam.

My first and only in person encounter came with him in 2017 and he is the only buck that I recall assigning a name. I dubbed him, “The Big Six With No Browtines That Frequently Visits My Cameras When I’m Not There” (TBSWNBTFVMCWINT for short).  At the time he was a big six point with no brow tines, hence the name, and big is kind of a relative term for New Englanders. His basket rack was on the wide side is all. That made him big.

Our paths crossed on a sunlit evening in mid-October shortly after my son, Oliver, was born. I didn’t have a stand set up so I was half scouting, half bowhunting from the ground and half trying to stay awake. My Better Half was home with Oliver so I could hunt, wondering why her other half had three halves. I parked myself in a stand of large pines and enjoyed the solitude.

Movement off to my left caught my attention. Instinctively, I raised my binoculars for a closer look. His antlers gleamed in the rays of sunlight streaming through the pines as he fed along. Eventually, he made his way in my direction and even closed the distance to within 40 yards, but I never felt comfortable enough with the range to take a shot. He spotted me raise my range finder when I thought his head was behind a tree. It wasn’t. One eyeball was very visible through my rangefinder. The gig was up.

I never saw him again in person after that, but his travels often brought him past my cameras. Unlike other bucks that spent the summer in the area, he stuck around all through the rut as well, apparently figuring there were enough females nearby to satisfy his desire to live a promiscuous lifestyle. I experienced his rutty behavior firsthand the morning my dad shot him.

The plan was simple. I was to hike out ahead of Dad and position myself below him. He would follow behind at a slightly slower pace on the same path I traveled and settle in on a stand that had been producing regular deer sightings that season. The stand site was located at a transition line from open hardwoods to thick brushy habitat with old logging roads scattered about. Forty yards below the stand I had a camera, which I checked on my way by in the dark.

The logging road the camera overlooked had been freshly torn up by a rut crazed buck only a few hours before my arrival. I was anxious to check my camera. Sure enough, TBSWNBTFVMCWINT was the one who had made the mess. It was exciting just to know he was in the area, even though in my mind I knew he could have been miles away by then. I continued with my plan of working my way around the hill. The morning was definitely active, perhaps it was a byproduct of the frigid temps and fresh snow, or maybe it was simply because the calendar said it was time. I came across fresh scrape after fresh scrape and heard deer running in the frozen leaves on more than one occasion but was never able to make visual contact.

Around eight o’clock I parked myself on a brushy knoll I’d never been at before and poured a cup of coffee to try and warm up a bit. The temps were in the single digits and I hadn’t seen the sun yet. Hot coffee was a welcome feeling. A shot rang out in Dad’s direction and another quickly after. Then silence. My texts to him went unanswered for a time until he finally called to let me know the good news. TBSWNBTFVMCWINT’s unquenchable thirst for love finally cost him as he came by my dad while tailing a doe. The first shot had put him down for good. The second shot put him down for gooder.

Joining the celebration with dad sounded like much more fun than sitting alone in freezing temps, so I high tailed it back to him. After performing a close inspection, I confirmed that it was indeed our old foe. The cold, clear morning made for great pictures and another lifelong memory had been made.

I often look back at the pictures to remember that morning – the anticipation, the excitement, the joy, the celebration. It was such a different time. I remember texting my mom to let her know Dad and I would be dragging yet another animal home to hang in “her” shed and butcher on her kitchen table. Each time I sent a message like that I could hear her eyes rolling before she even responded. I reveled in sending her those texts. Deep down she liked it, and that’s what I always told her.

My mom died this past March after a brutal battle with cancer, especially during the final three months of her life. I can’t formulate the words to adequately describe the depth of emotions I experienced during her final months and days. The highs and lows, the countless times I thought I had said my last goodbye to her, the tears we shed together in quiet moments alone when she finally recognized the battle she’d fought so hard was one she wasn’t going to win.

There something very bittersweet about knowing when someone’s days are limited. For two years I cherished each moment I was with my mom. I don’t think there was a time that we were together that I didn’t tell myself to soak it in, even if she was doing something that annoyed me. There was always a pause to keep things in perspective. We worked together, and her office was across the hall from mine. At lunch, I’d tell her stories about my kids or listen to her tell me stories about the other grandkids. We’d often “sneak” down to the store together and buy lunch. That was kind of our thing. We wouldn’t tell my dad we were leaving because he was supposed to be on a diet and mom didn’t want to buy him something he wasn’t supposed to have.

Despite the awfulness that comes with watching someone battle a cruel disease, I’d be lying if I said there wasn’t anything I could find to be thankful for. A month before she died, my wife and I welcomed Eden Hope into this world and my mom got to hold her four times before she died. I know my mom prayed so hard that we would have a baby girl, especially after losing Cora six years ago. There are numerous other ways I can see God’s goodness since it all began, but mentioning them all would take too long. God is good, I don’t doubt that, but sometimes the immense grief clouds the view.

Today marks six months since she passed, and I still find myself in disbelief that she’s gone. She was such a daily part of my life that multiple times a day I have to remind myself that when I walk into work I won’t see her sitting in her office, or that I can’t send her a funny video of the kids to try and cheer her up. Quite frankly, it sucks. She loved her family and it feels like she was forced to leave a party before she was ready.

I’ve sat down to write many times over the course of this year, but every time I found myself staring a blank screen. Words that normally flowed easily from my fingertips just wouldn’t come no matter how hard I tried. Life has been consumed with trying to fill her void at work and a household of my own busy kids leaving little time to relax my mind long enough to find the desire to write. Sometimes I wonder how long it will last. Death is a part of life, I get that, but the messy journey of grief is long for those of us left behind.

I visited her gravesite today for the first time since her stone was placed. I love the verse that is inscribed on it. It reads, “do justly, love mercy, and walk humbly with your God.”  You’d be hard-pressed to find a better verse to live by while making a lifetime of smiles with family and friends that one day will help you through difficult times. I’d like to tell her about my kids as my wife and I try to raise them with those goals in mind – just one more time. Eden is already six months old. She’s sitting up and eating solid foods. She has her daddy’s blue eyes and her momma’s good looks. Oliver is absolutely insane. If ever there was a definition of a toddler, he’s it. He’s all fun or all difficult. There is no reasoning with him, only prayers for survival for those in our household when he loses his bananas. Sam is growing up too fast. He’s determined to shoot his first deer this year. I’d love to tell my mom we decided to homeschool him. Sam wanted to in part because he’s convinced he’ll have more time to hunt and fish and golf. I can picture my mom smiling as I tell her these things. Thinking of her smile helps a little.

I know hunting season will feel different this year. Mom’s not around to text when it’s time to hang another one in the shed or to help package up the meat. I suppose part of life involves moving on and starting new traditions, despite how difficult it feels at times. Reliving the memories that bring a smile to your face does help a little. Memories like big bucks on frigid mornings or picturing the smile on my mom’s face. I’d give anything to see that one more time, but I’m thankful for the memories to help cross the bridge till we meet again.

Tim– your best writing yet. You weave together a story where love is the theme, where family matters most, where birth and death intersect. Thank you for sharing. We all gain much from your journey.

God Bless you, TIm. I know where you are at, keep the faith!