I love reading deer stories even if they are not from around here and even if the writer happens to be a St. Louis Cardinals fan. Everyone, meet Tim Clements. Tim lives in Missouri where big bucks grow like weeds and they always stand broadside to you. OK, that’s not true, that’s just the way I view it through my jealous Vermonter eyes. The truth is,  successfully shooting a mature buck is difficult in most areas of the country – especially with a bow, and Tim’s success is no exception. Countless of hours scouting had finally provided Tim with the opportunity to close the deal and let’s just say he didn’t waste the opportunity!.  It’s a great story and even though he didn’t shoot it around here it’s still worth sharing! In fact, it even made me think I should start a new category for stories submitted from readers outside of New England so that’s exactly what I did. Until I can think of something more creative I have named the new category “Stories From Afar”. That’s a lame name I admit, but I can’t think of anything better at the moment. If you have a story of your own you would like me to share just email info@the4pointer.com.  Also, if you would like a reminder as to why the Red Sox beat the Cardinals in the World Series this year click here and read until the end! Without further delay, here is the story of Tim’s great buck:

“The Out of Nowhere Buck“
by Tim Clements. 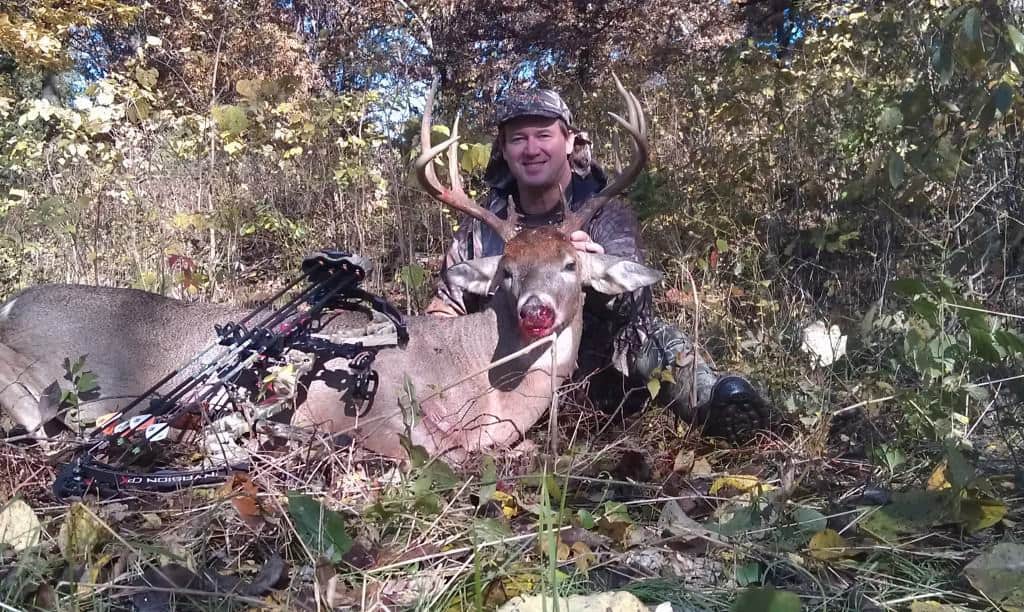 Rain, more rain than I cared to see during Halloween week. It was late pre-rut in southern Missouri and with the exception of hanging a new set for the rut and pulling some camera cards, I had been stuck inside for three days waiting for the deluge to come to an end.

I had better than a dozen trail cameras set out on the properties I hunt on, covering an area a mile wide and a mile and a half long. The photos were telling me that things were about to heat up, with hit listers showing up on cameras ¾ of a mile apart. I knew that when a mature buck appeared on cameras that far apart within 24 hours there’s a reason for it and it likely has nothing to do with his stomach. 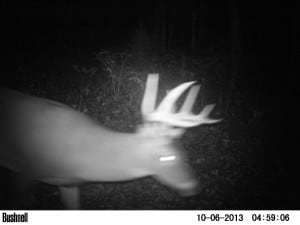 The only thing I needed was for the rain to stop. The forecast was favorable, calling for an end to the rain Halloween evening and cool overnight temps. An end to the rain meant bucks would likely be on the move, freshening scrapes and looking for estrus does. I had recently hung a new set in a travel route between doe bedding areas on a white oak ridge next to a creek bottom. I had missed an opportunity at a 130 to 140 class ten point during the 2012 season because I had been reluctant to move a stand a mere 48 yards. I was determined that it wouldn’t happen again.

The morning of November 1st dawned clear and cool. I had been in the stand for a little over a half hour as the sun rose behind me. It was very quiet with the exception of my Ozonics unit humming above by head, protecting my downwind side. The first 45 minutes after daybreak were uneventful. I decided it was time to try and make something happen. After all, it’s the first week of November. It’s prime for calling and rattling.

I picked up my rattling antlers and smashed them  together aggressively for a couple of minutes, raking them up and down the tree, doing everything possible to replicate the sound of a pair of angry bucks fighting, occasionally mixing in some grunts and bleats. It wasn’t long until a young buck showed up limping, with some broken tines on his right side. He obviously didn’t get the message from the buck that broke him off and gave him the limp. 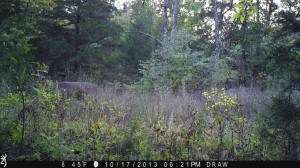 The big 9 pt in the daylight

After allowing the half rack to pass, I resumed calling and rattling periodically, in hopes of getting the attention of an unseen cruising buck. Several small bucks had showed up to investigate and I was beginning to think that I may need to wait a few more days and allow the rut to progress further. Maybe I was just a little early.

And then….there has was. As if magically appearing out of nowhere like only a mature buck can do. He was walking along the edge between dense woods and open timber occasionally stopping to take as much wind into his nose as possible, trying to locate the source of all of the racket. He appeared to be somewhat puzzled by the absence of the fighting bucks as he continued along the trail leading down to the creek. He was over 50 yards away and I knew he could be gone forever if I didn’t do something to get his attention.

The buck was out of my view behind some cedars and multi-flora rose bushes; I couldn’t see him unless he moved. Almost instinctively, I reached into the pocket of my HSS vest and pulled out a can call, not knowing how the buck would respond. It didn’t take long to find out. After 2 bleats, I heard hooves on the ground and saw him closing the distance very quickly. Before I knew it, he was standing at ten yards quartering away. He had no idea that I was sitting 17 feet above him.

I prefer to shoot while standing since that’s how I practice but in this case standing wasn’t necessary. He was to my left and since I’m a right handed shooter it was a tailor made shot. My Scott release was already connected to the D-loop on my Bowtech Invasion. I slowly came to full draw and settled the pin of my Sword sight high and on the last rib on the left side of the buck’s body. I knew I needed a high aiming point because of the angle of the shot so the Rage 3 blade broadhead could go through both lungs.

I squeezed the trigger and sent the Gold Tip Velocity XT on its way. My shot was true and with a resounding whack the arrow penetrated forward and down through the large bodied buck. I saw blood escaping through the entry wound before the big deer made 2 big bounds through the woods and I knew the Rage had done its job as I watched the Nockturnal lighted nock show me where to pick up the trail.

30 minutes later I was on the ground and it didn’t take long to find the blood trail. Considering the shot was quartering away, there was a considerable amount of blood. After a short tracking job, I had my hands on my best archery buck ever. A mature 9 point with some character on the back of his brow tines. This was the payoff for all of the hard work. Checking trail cameras, watching bucks in the morning and in the evening, learning their travel habits, maintaining mineral and supplemental feeding sites is a great deal of work and takes time. This moment made it worth the effort.

I green scored my buck at 126 inches, but the score really isn’t all that important. I had taken a mature buck with my bow. This buck isn’t my first buck with a bow but is special because this buck was one I earned. I had made a list of the bucks that I would shoot and this one is one of them. I had opportunities to shoot lesser deer that hadn’t made the list. Maybe one of them will stroll into bow range next year or the year after. I know this, I’ll be out there, waiting for that next special buck. 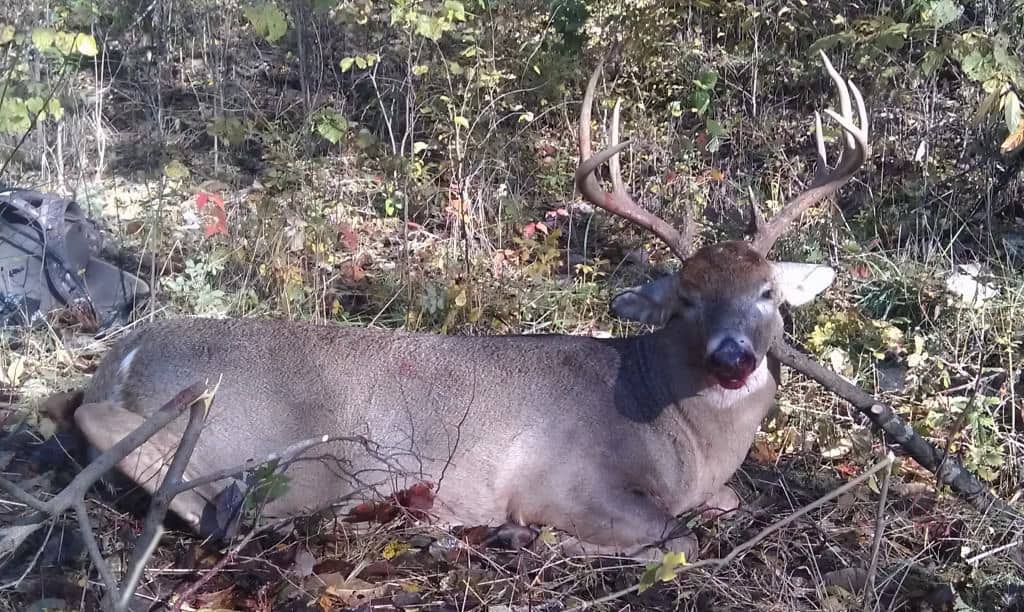