Guest Post by James Schneider: The Tower of Death! 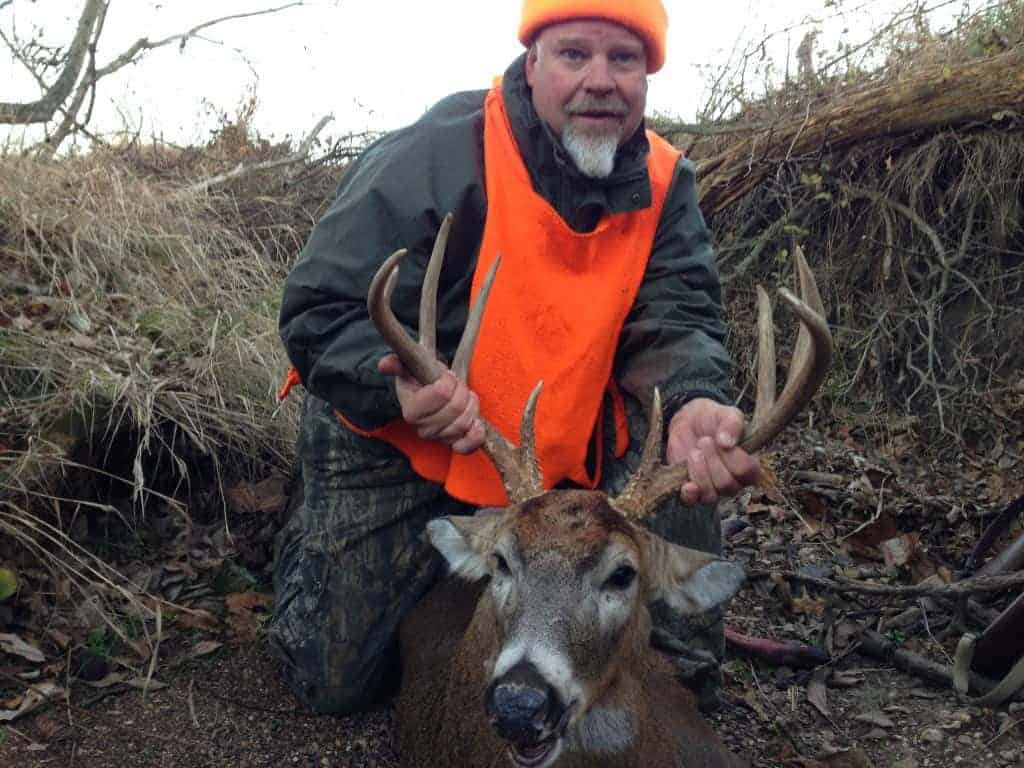 Jim Schneider is a Vermont hunter who travels to Missouri from time to time in search of big deer. On this particular hunt Jim was able to connect with a big fella and he was kind enough to share his story with us. Thank you, Jim, for sharing your story and exciting all of us with your success!

It’s 5:00 in the morning on the third day of the Missouri rifle season and I am staring straight up into the darkness, my insides a mixture of anxiety and anticipation.  Random thoughts drift through my mind:  “This is ‘Brad’s stand’…I am afraid of heights…he must have been inspired by the eiffel tower when he built this thing…It has already yielded two big bucks in the first two days of the season.”  I start to climb.

It started on opening morning at seven o’clock with a rifle report from the general direction of Brads stand.  My first thought was that it couldn’t be Brad because I have never known him to shoot anything on opening day unless it was an absolute monster.  Moments later I hear Craig’s voice over the radio asking, “Brad was that you?”  A few moments pass then the radio comes alive with Brad’s excited voice, “yeah, I got a nice nine pointer down over here”.  Then this from Craig, “I have dibs on Brad’s stand tomorrow.”  Well that was just fine with me, it would take more than one nine point buck to get me to climb up that monstrosity.  Well the “more than that” came quickly on the following morning when a nice eight pointer fell to Craig’s 30’06, again,  just after first light.  At that point I was almost convinced that I should risk my life and later I was pushed over the edge when my buddies told me about the other two giant bucks they had seen while dressing out Craig’s deer. 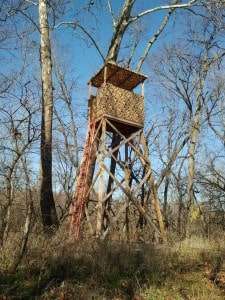 The Tower of Death Stand

So that’s what brought me to the tower of death on this third morning.  As the light begins to filter through the darkness Brad pokes me in the side and directs my attention to a field 100 yards behind us where a very large buck is moving quickly from my right to left.  I put my scope on him and see that he has 8 tall thick points but I lose sight of him when I try to move the scope reticles to his vitals, as I peer over the top of my gun to reacquire him he jumps a fence and disappears into the brush.  I sit down letting the adrenaline ebb a bit and considering if I could have done anything different.  Brad continues to do what he always does, relentlessly scan every inch of the Missouri farmland for any sign of the next one.  And it took him all of 10 minutes to locate the another deer.

This time he pokes me in the arm and says the two words that send my heart racing again, “big deer”!  I follow his gaze to a large hay field about 300 yards out and see the body of a deer sauntering towards a tree line marking a small creek bottom.  Brad has obviously seen this routine before because he says to me, “he’s going to come down through the creek, walk out about 10 yards into the field and stop.”  Then, “get on him with your scope and I will tell you whether or not to shoot.”  As if he had heard the instructions the buck crossed the field, passed through the ditch, then stopped 10 yards into the field.  My cross hairs were searching for his chest when Brad’s next words went through me like a freight train , “he’s real big, take him”.  I took my time, the distance was a little over 200 yards and he was slightly angled towards me, but still missed on my first shot. The deer never moved a muscle and my second and third shots seemed solid as he ran back into the ditch disappearing from sight.  After watching for a moment Brad said, “I think you got him but if you didn’t we should see him high tailing it across the field any moment.”  He never reappeared.

As we sat waiting out the next 30 minutes two large does wandered out into the same field and Brad harvested the bigger of the two.  My anticipation continued to build until we finally felt like we should go have a look.  Brad had marked in his mind where the deer had entered the ditch and led the way to that spot.  As he crept up to the lip of the little ravine he stopped, then turned to face me with a big grin lighting his face and flashed me a thumbs up.  At that moment I realized that I had never seen  the deer’s antlers or counted the points while looking at him through my scope.  As I walked up to the edge and looked down I found myself looking at my first 10 point buck, and by far the biggest I had ever taken.  While kneeling down beside him and lifting his big old head I realized that I might just be a little quicker to call dibs on the tower stand next year. 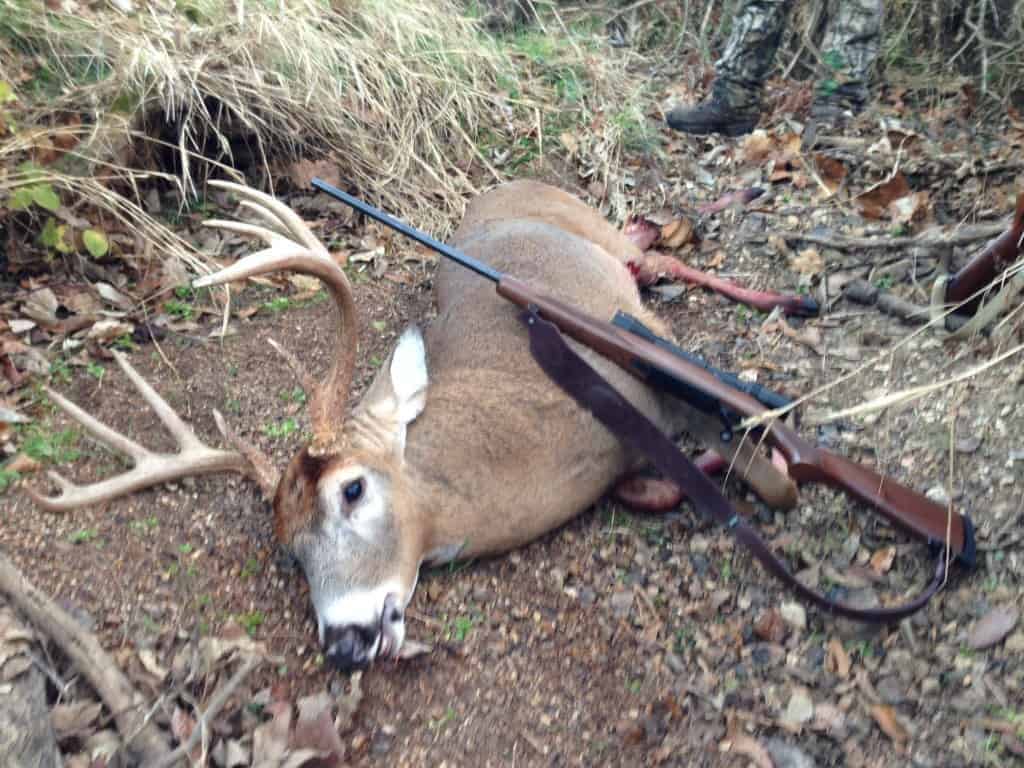 Great Story Jim! Thank you for taking the time to share your story with others! It keeps us excited and eager with anticipation for our own chance to kill a big buck!