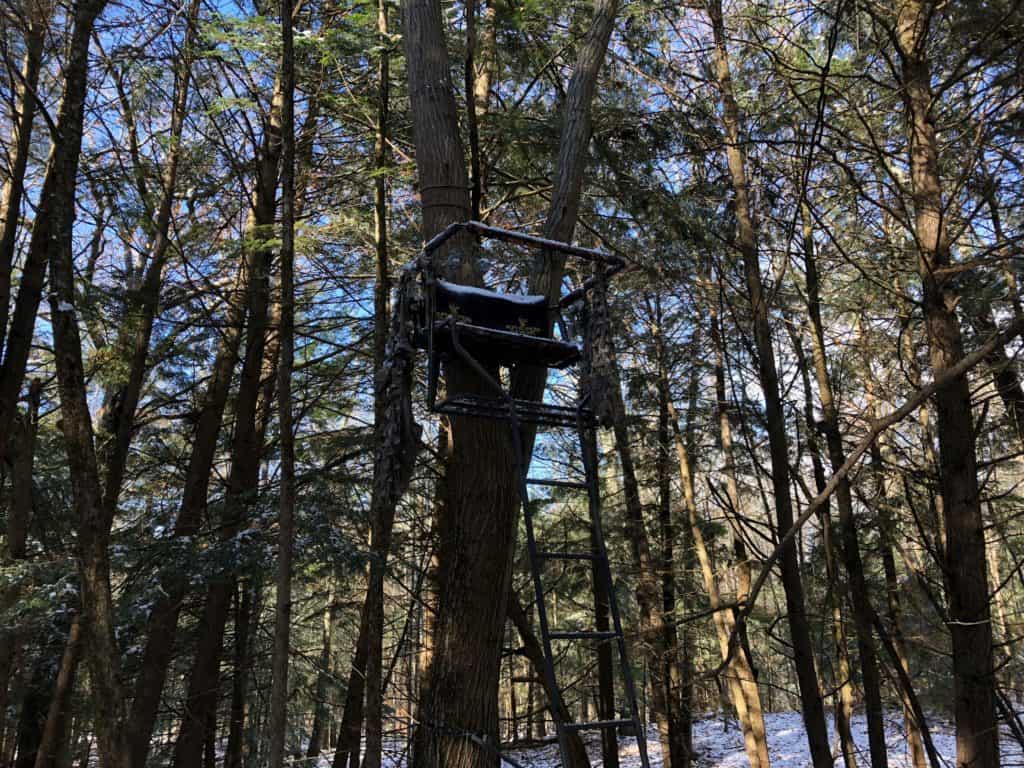 His stand sat empty all year, perhaps as a fitting reminder of his passing, but mostly because there were no deer travelling by it. Sometimes I can be a dumb hunter – going back to the same place over and over because it used to be good – but this year I figured out fairly that without any acorns within fifty miles of Dave’s stand there wouldn’t be any deer there either.

I did get a few trail camera photos of a nice buck passing under it shortly after dark in early September, but not much after that. In fact, my camera would often sit for weeks and only capture one or two deer pictures in that span of time. I eventually moved the camera somewhere else in my search for deer. Historically, the area in which his stand is positioned has only been good for does and small bucks during the daylight hours. After dark it has been a fantastic producer of big buck pictures.

It sits on a natural travel corridor for deer. The deer come from bedding areas to the west and walk along a transition line of softwoods to hardwoods that brings them toward his stand once they are up and looking for a place to eat. There are apples half a mile to the east, and there are a handful of massive oaks that tower within archery range of the stand. It’s a good spot when there is food except for all the human activity in the area, which is the main reason why the older bucks wait until long after dark to make an appearance. Does and young bucks make great table fare though, and they aren’t as wary.

I’m not convinced Dave was aware of any of these things when he said he wanted to put a stand in that area, but when I saw the two person ladder stand delivered by UPS, I was convinced that he wasn’t going to do any of the actual work to put it up regardless of where it’s final resting place would be. He had that type of reputation. It’s a reputation I hope to develop as I grow older as well. Work is for the younger generation.

In the five years since we’d set Dave’s stand up, only two deer have been harvested from it because it’s so dependent on feed availability in the area. I shot a spike horn with Sam by my side last year and my dad shot one with his crossbow, but there have been other chances as well. Dave gave one a haircut with his never-miss-Matthew’s, and my dad missed a decent buck from it one evening. It’s safe to say that the stand is “hit or miss.”

I do not have many memories of Dave from his younger years, meaning younger than his late 50’s, only stories. Rumor has it he once hit a baseball 900 feet in a little league game and he took a fire truck for a joy ride. Legends grow with time and can only be refuted by personal eyewitnesses of which I am not one. What I can confirm is that Dave’s life was defined by the loss of his three-year-old son, Jonathan. Dave was never the same after that. There are plenty of eyewitnesses that can confirm, myself being one of them.

On the one hand, I can’t blame him. I look into the eyes of my own sons and could not begin to fathom losing one of them. The other night Oliver stumbled toward me while carrying his “Big Red Truck” book wanting me to read it to him and Sam is constantly begging me to play wrestle ball in the basement. Wrestle ball is our made-up game that is a combination of basketball, wrestling, and football. I have to play on my knees to level the playing field and there is a lot of tackling and tickling that takes place. I hope I never forget memories like that and I pray the ability to make new ones is never taken from me.

On the other hand, I will always wonder what could have been. He made choices I’ll never understand but decided long ago I wouldn’t judge him for. The way I figured, it wasn’t my job to do that. Pain and suffering have a way of multiplying grief, intentional or not, but I did hope to ask him about his past one day, if only to bring closure to my own curiosity or lack of understanding.

Dave reappeared in my life about ten years ago. We needed some literature produced for the family business and he was an editor and publisher looking for some extra work. In the beginning, our relationship was formed around work related tasks and hunting. Dave loved to hunt but his set up at the time didn’t allow for much of it where he was living in Florida. So, we emailed about hunting from time to time. Bow hunting was his favorite method. He was a Matthews guy through and through and was even sponsored by them at one point when he was younger and had a few hunting articles published. At least that’s what he told me. He wore his Matthews jacket every time he came for a “work trip.”

“Work trips” became the norm every fall, but actual work meetings were never scheduled during prime hunting hours. For those not familiar with hunting that may seem absurd. To anyone who hunts it makes total sense. I’ve always felt this way and always will. Who schedules birthday parties, weddings, or work during deer season? People who don’t understand big buck travel patterns, that’s who.

The funny thing about Dave was that he’d come up for these trips and then half the time he was visiting he wouldn’t hunt. At first, I didn’t get it. He’d come for two weeks at a time and I’d email him every day and ask him if he was planning to hunt that day. It seemed like more often than not his answer was “no” for whatever reason. Either his back was hurting, he didn’t feel well, or had too much other work to do, etc. After a while I realized it was best just to let him know when I’d be hunting and that he should just let me know if he was planning to go if he got around to it.

Despite all that, we did have a few moments together in the woods. I managed to shoot a doe with my bow one afternoon while he was in town (A Hoyt can kill deer, too). Dave finally wandered over for the recovery with just enough time left to tell me how strenuous it was for him to hold one leg back while I gutted the deer. One of my hobbies is to nick the stomach with my knife while field dressing a deer and this time was no different, except that someone was there to watch the contents blow right in my face. That part was different for sure. We had a good laugh about it after I was done gagging. That deer had been eating apples.

He had a dry, Patrick McManus type sense of humor – the kind I enjoy. Eventually our relationship grew beyond funny emails about hunting and work after a few years. My wife and I were expecting our second child and received news at the twenty week ultrasound that the baby she was carrying, Cora, would not survive. My wife carried her another month until she passed. It was a tough period in our life, and it’s still hard to think about her and what our family should look like but doesn’t. She’d be five years old now. Dave knew what to say because he’d been there, albeit at a much more difficult level.

He was good at encouraging people through their grief, but he could never seem to find a way out of his own, even though he knew what others needed to hear in the midst of theirs. He offered to visit Cora’s grave with me and I told him I wanted to visit Jonathan’s with him. I wondered how long it’d been since someone offered to make the trip with him or how long it had been since he’d been back himself.

We found a few minutes one summer to visit Cora’s grave but never Jonathan’s. We had plans to go one day, but it was raining hard, so we postponed our trip for another time. I’ll always be disappointed that we didn’t find another time to make it work. It seems selfish to say this, but I wanted to go for Dave as much as I wanted to go for me. I know it would have meant a lot to him for us to make the trip, but I also hoped that after more than sixty years of grief that he’d say something that would help me better understand his past. I had no desire to judge him for his choices in life, I just wanted to know why things played out the way they did. Isn’t that the main question everyone wants to know the answer to when dealing with grief? Why?

On the nights Dave would actually hunt, he’d make the short walk to his treestand with fifty pounds of gear for a two hour sit. Who knows what was in the bag of his. There was a lot of stuff, that’s for sure. He’d disappear when he climbed in his ladder stand. No texting, no radio check ins…nothing. Just silence as if the rest of the world didn’t exist to him. I don’t know where his mind went, but I think I’ve been there too. Sometimes a guy just needs to climb into a tree stand a disappear from life. There are few other places I can think of in this world that offer peace and quiet as can be found in the woods. The important thing is to come back. That can be hard. I think Dave struggled with that part. Heartache is a thief; a stealer of joy.

Dave passed away earlier this year leaving many of my questions unanswered, and I’m not sure knowing the answers matters now that he’s gone. I am thankful for the few years I got to know him at the end of his life. We were able to have a few chuckles together. He offered to help edit some of my stories, probably because he couldn’t stand to read them with bad grammar. He always told me I should write a book, but I could never tell if he was just looking for more work of if he meant it. I think he meant it.

I don’t blame Dave for wanting to disappear to his treestand. I know the feeling. I like to disappear in one myself from time to time. I just wasn’t willing to sit in one that didn’t have any deer around it this season. Maybe next year.

For no one is cast off by the Lord forever. Though he brings grief, he will show compassion, so great is his unfailing love.

Thank you for reading!

Your big heart and thoughtful brain were well engaged in this eulogy. Thank you for sharing.