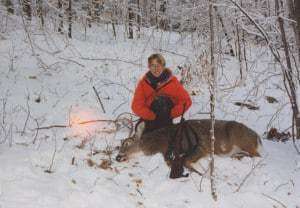 OK, I look pretty goofy in this picture but that’s not the point…The point is I learned a couple crucial lessons about hunting on that cold day, and not just because I was successful, because I almost wasn’t. It was an extremely cold morning with the temperature still hovering right around zero at 8 am. I was standing with Dad on a logging road and we were just about to give up and head in to warm up. My feet and hands were frozen and desire to warm up was quickly overtaking my desire to kill a deer. One last call on grunt tube and this guy came flying over the hill to see who was intruding on his turf. I missed him clean on the first shot but he paused on his way out of town just long enough for me to center the cross hairs and pull the trigger to put him down for good. He weighed 115 lbs and only had half a rack, but he seemed a lot bigger than that to me.

So, what did I learn? First, if you really want to get a deer you have to stick it out. You just can’t shoot them in the house. Second, and more importantly, I learned that calling deer works, even in this neck of the woods. Dad and I really didn’t know what we were doing at the time, he just blew on the tube (after he thawed it out) and a deer came running to us. I have since spent much more time than I would like to admit reading about calling deer and watching videos of it working so I could use it to become a more successful hunter. As a result I have called in many more deer on purpose and even shot my biggest deer to date due to calling.

Oh, by the way, just because I learned lesson #1 on that cold day doesn’t mean I always stick it out…