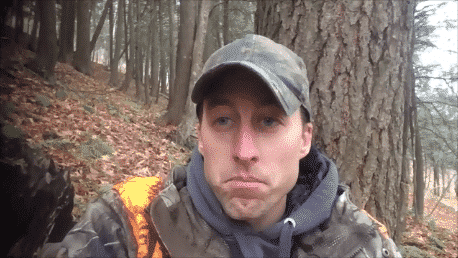 “For it’s one, two, three strikes you’re out at the old ball game!”

How many strikes do you get when deer hunting before you are out? Is it three just like in baseball? I hope so because that means I’m still in the game.

The story goes like this. I had only been in position for about twenty minutes when a deer decided to run through the ravine below me. It was a fine doe, all alone and a looking tasty. I’m not sure what made her run by me, but she stopped fifty yards away with her butt end facing me. Those in Texas refer to this shot as the “Texas heart shot.” Or is it us hunters in the north that refer to it that way? I don’t know, either. I’ve always been told that’s what it’s called. I wonder if hunters in Texas know this?

Anyway, that’s not a good shot angle. Maybe it is in Texas where everything is bigger, but not here. Since the doe was fifty yards away and facing in the opposite direction, I figured my chances at putting her in the freezer were over. Then, I got a birdbrained idea to try and slip a little closer to her. She moved a little to the right which put her behind a slight rise in the terrain. When she did that I got down on my hands and knees and crawled through the wet, muddy leaves for ten yards to try and close the distance gap.

I reached the edge of the hill and saw her standing motionless. Then, as if she read my thoughts (“Please come closer!”), she turned around and worked her way up the hill which brought her slowly closer to me. I frantically ranged landmarks on her travel route before she moved through the shooting lane. She stopped at forty yards and stared are me, probably because there aren’t many things in the woods that make the noises I made to try and get her to stop.

Here is where everything went wrong. She wasn’t at forty yards. It was more like thirty or just a little over. A Sneaky little critter, she was. Anyway, my arrow went right over her back. That will happen when you use a forty yard pin and the target is closer to thirty yards. Doh!

You know what really gets me? I’ll tell you even if you don’t want to know. Just after the arrow sailed over her back, it flew through a sea of saplings, as well as a blowdown, without hitting a single thing! I had to fight my way through the brush to retrieve my arrow. I darn near needed a chainsaw just to reach it. Now tell me, why is it I hit the only sapling on the hillside a few months ago when it was in front of the deer, but this time I didn’t hit a single one! Life is clearly not fair.

That about sums up my Vermont archery Season. I didn’t see many deer but did have a few opportunities, which I decided to blow. I have no one to blame except myself and the fact that life is not fair.

New Hampshire Muzzleloader season opens this Saturday, so I think I will spend any opportunities I have to hunt this week with my bow over there instead of hunting Vermont. I might as well put in as much time as possible in New Hampshire with the rut just kicking into gear and hunting season in Vermont about to come to an end.

I’m about to throw my bow in the trash can or sell it to the highest bidder. Thank goodness muzzleloader season is just days away. Maybe I’ll be able to hit something with that.