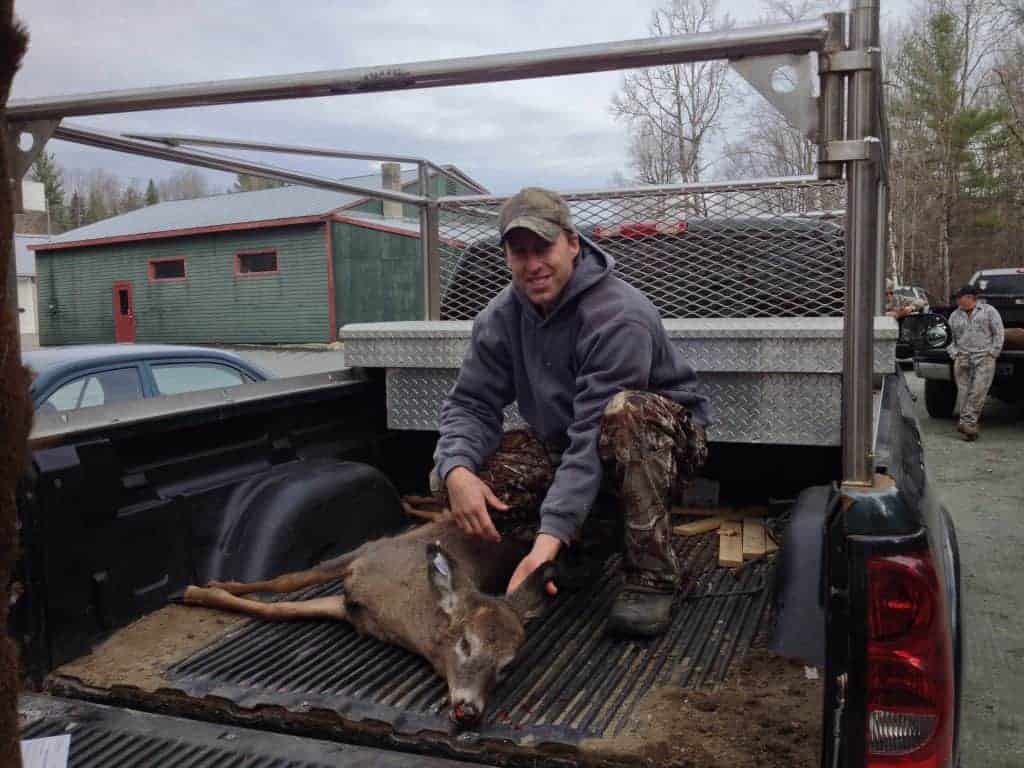 Other than a rather intense encounter with a bear a mere twelve feet away from Sam and I on Friday night, the weekend was pretty slow in the woods. It was Sam’s first time out “deer hunting” with me and he mentioned afterward that he’d rather not bear hunt again until next year when he’s six. I think we’ll stick to squirrel hunting for the time being.

But that’s not what I want to talk about. You know what really gets me irritated? I can’t stand it when hunters saddle up their high horse and degrade others for shooting a deer they have deemed to be too small. It’s one thing to give someone a hard time for shooting a deer that is really small, maybe even a little good hearted public shaming is called for, but anything further than that is completely unnecessary.

Last weekend, Pauline’s Quick Stop posted a picture to Facebook of a hunter named Matthew posing with a sixty-five-pound button buck he’d harvested. (See Picture here.) Not unexpectedly, this picture elicited a negative response from the high and mighty crowd that would never, ever, ever in a million years dream of shooting a fawn – especially a button buck! The deer herd is on the brink of collapse; didn’t you know that? Killing a button buck fawn will only speed that process up. No true hunter would do such a thing.

Here are some of the comments I read. (Some are from memory as many of the negative posts have been deleted).

“Seeing pictures like this makes me want to stop hunting.”

“Not cool being so unsportsmanlike. I would have passed it.”

“That is pathetic. My boxer is bigger than that.”

“He shouldn’t even be allowed to have a license.”

I can’t remember the other comments that descended into name calling and the use of curse words in creative, derogatory ways, but there were plenty of them. They don’t need repeating anyway. I’ll let you imagine what was said.

Here is what I think. I suggest the first guy stop hunting if he is so offended by Matthew’s harvest. Eek! It sounds like it really hit a nerve… The second guy should get a good sportsmanship trophy fashioned from pure gold – he obviously deserves it. The person with the 65+ pound boxer should be congratulated for keeping the dog in a good, healthy condition. There is nothing pathetic about the deer, however. And to the person who says Matthew shouldn’t be allowed to have a license, I would ask, “Why not?” From what I know, the harvest appears to be legal. Did he do something wrong that I don’t know about?

Look, I’m not advocating the harvest of young deer, but it does happen from time to time and that’s OK! Harvesting some young deer every year isn’t going to drive the deer herd into extinction. I’m of the mindset that a good old fashioned ribbing is much more effective at making someone think twice before shooting a small deer than an angry tongue lashing will ever be.

I wish those that are so quick to berate fellow hunters would politely redirect their energy at fighting those who are trying to strip our hunting rights away from us. Turn a blind eye to this fight if you want, but it’s happening every day and the opposition is relentless. Infighting amongst ourselves only breeds disunity and provides ammunition for a unified foe. Don’t do it.

Actually, one more thing. Sixty-five pounds is a great weight for a fawn harvested halfway through October. It’s nice to know the deer weights are looking good with the winter fast approaching. Congratulations on your deer, Matthew!  I’ve harvested much smaller (on accident of course 🙂 ), and I’m not ashamed to admit it. I bet the meat will taste great sautéed with butter and onions. I know mine did.

There you have it. I fully admit that I’ve shot a young deer or two…or three. It happens. These deer are very good at pulling off the ole “switcheroo” when trotting through the hardwoods. Tender meat and easy drags are an upside to something like that, but I have no desire for it to happen again. I don’t think I could handle all the mean name calling.

What I think people forget…They taste much better when they are young. I have and have known people who shoot calf elk…I will admit, they are really really tastey. The question really needs to be asked. Are we doing this so we can eat? Or are we doing this for pride? If we need to eat…better shoot something. If it is for pride….well wait for the big one. One thing is for sure, the idea of hunting is not synonymous with the idea of shooting trophy animals or even older animals. However we can all agree that if you gotta… Read more »

Would the herd be any stronger if only mature healthy bucks in their prime breeding years are harvested? Reducing coyote predation would do far more to help the herd than eliminating the occasional legally harvested fawn. My only issue is wasting a perfectly good deer tag on 25-30 pounds of meat…..but it sure beats tag-stew on a cold day.

Wow thank you so much for your support and kind words. I was very surprised myself when I saw all the hate mail about this deer. I’ve made smaller kills too but I was disgusted by the comments. People consuming their own life about someone else’s kill…. doesn’t make any sense. Let’s protect the hunters that bust their ass to harvest every year!

You bet, Matt. Just be careful not to eat that deer all at one meal. 🙂 Good luck hunting the rest of the year!

I saw that post and read those replies ,, I didn’t comment in the discussion because it was nothing but a beat down of a young man that took a legal harvest. It isn’t a deer I would have taken, but that’s NOT my choice, it wasn’t my hunt or my land. This young man had his reasons for his legal harvest and he was happy with what he ended up with, and that’s the bottom line. Maybe next time experience would give him a different outlook and pass on such a deer, who knows and I don’t think it’s… Read more »

Well said. “To each, his own”. Why must we try to force our standards on others? Shooting a fawn is actually a preferred management practice in Europe, as they are the most easily replaced, and more likely to not make the winter anyway. I personally try not to (but, that is my choice), but have had it happen. It was quite funny actually. I was muzzleloader hunting in Alburgh, when I heard deer running toward me from behind my right shoulder, as I tried to maneuver the Kentucky Rifle around that way, accidentally Through the blowdown I was hiding behind,… Read more »