The deer have got me discombobulated, there is no doubt. My time lugging the ol’ smokepole around the New Hampshire woods has yielded zero pounds of venison for the fridge, though I did have a chip shot opportunity at a lone doe. I decided to pass on her since it was the first day and since I know the woods are crawling with 200” class bucks. One of them is bound to walk by me in the daylight at some point. When it does, I’ll be sure to share a picture and lie about the location.

The lone doe was the only solid encounter I’ve had with a deer this year. She came up from below me as I was still hunting along a ridgeline keeping my eyes peeled for signs of deer movement. I don’t know how she did it, but she got to within thirty-five yards of me before I saw her. I can’t even blame my phone for this because it was in my pocket – no joke. I blame that on cold fingers and poor cell service.

I was surprised to her staring at me when I shouldered my gun because I thought her head was behind a tree, but her eyes were locked on mine. It brought me back to the glorious time I met my wife. I remember it like it was yesterday. Her eyes were full of intrigue, yet there was a slight look of fear of the unknown. Is he harmless? Why is he here? What does he want? He looks out of place. These were all thoughts going through her mind as we stared at each other. The doe wisely moved on, but my wife stuck around for some reason. Now we have two kids and a house mortgage to pay off that has resulted in a severely reduced amount of hunting time.

The rest of my time in New Hampshire produced trail camera photos of bucks hanging around my hunting spots when I haven’t been there, and a couple of bobcats I called in with a can call. They came slinking in along the hill, but not very quietly. Probably young bobs that were still learning, because any rodent, squirrel, or guy with a can call could hear them coming for quite some time. We locked eyes as well, but the same feeling of love wasn’t there that I had with my wife. They were cats, after all. They only care about themselves.

To date, my New Hampshire wildlife counts stands at two bobcats and one deer. Clearly, it was time for a change of scenery to a place where the deer flow like wine and the bucks instinctively flock like the salmon of Capistrano. I’m talking about a little place called Vermont.

Opening morning of Vermont rifle season brought two inches of fresh, sloppy snow and a wet keister. What it did not yield was any deer, but I did find a few tracks that would seem to indicate deer had traveled through the area at least once in the past twelve hours. That’s very encouraging for someone who has twelve hours of time to dedicate to hunting, but I ain’t that guy, especially with a wet keister right off the bat.

The morning ended with me feeling that Vermont was just going to be a continuation of my experience across the big crick.  I checked a few cameras that had been sitting for two weeks undisturbed. Exciting, right? Wrong. Each camera had one deer on it. At least one had a buck working a scrape. Too bad he was the only deer to walk by in two weeks, and in the dark. Does anyone know where I can purchase a nighttime hunting license? I feel like my success rate would improve dramatically if I had one of those.

Sam met me at the end of the driveway when I arrived home at noon to dry out. He really wanted to go with me in the afternoon, so away we went to kill ourselves a big buck. He got cold about fifteen minutes after we set up on the top of a little knoll that overlooked a big hemlock grove. The wind was really whipping, so I thought the deer might be hanging out in an area that provided some protection. That may have been true, but it didn’t keep Sam from getting cold. I suggested that perhaps his hands had gotten cold because he declined to wear his gloves on our walk in from the truck. It’s hard to argue

with a seven-year-old, especially one with cold hands. I broke out my camp stove (one must be prepared for all scenarios when hunting with kids) and warmed up his hands. I had to work hard to convince him that we weren’t there to start a forest fire. “Deer shy away from those,” I told him. 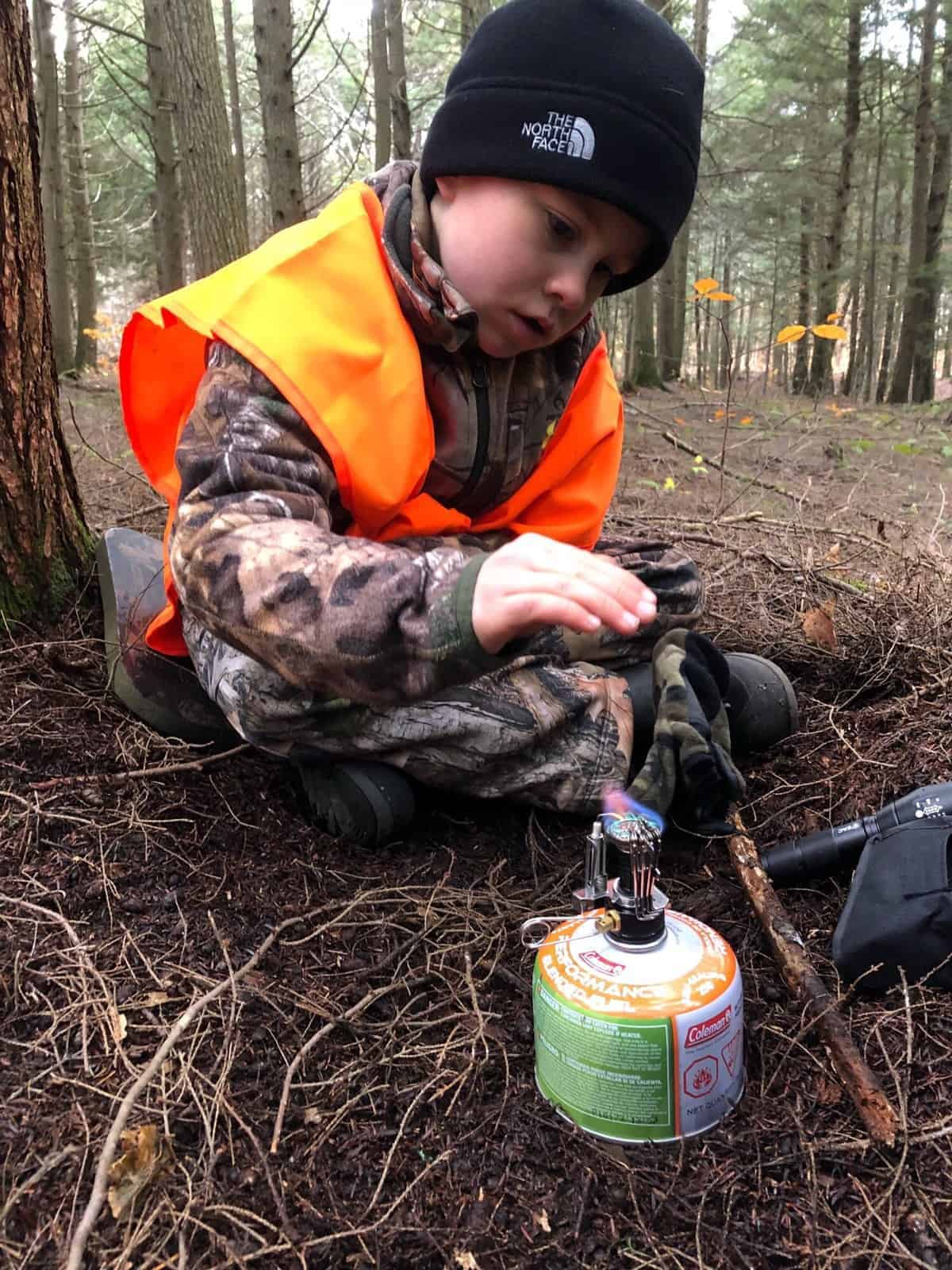 Three minutes after his hands warmed up they got cold again, so I decided it might be a good idea to go for a walk instead of forcing him to sit there and freeze to death, or worse yet, go home early on opening day. As we crested a slight rise, a deer took off on the other side. It was a buck. I don’t know how big, but it looked like one of those 200” ones I mentioned earlier. There was no time for a shot, partly because I was carrying everything Sam said he wanted to bring and said he’d carry when we left the truck, but mostly because it was too far away and running too fast. We’ll get him next time.

So that sums up my firearms seasons so far. I have seen much less rutting activity than in years past and trail camera pictures are fewer as well, though I do have a few nice bucks on camera. It’s been a challenge to locate where the deer are spending consistent time this year. I have historically struggled to fill the freezer when the mast crop is low like this year. The deer are spread out and in a wander and browse pattern, which isn’t really much of a pattern at all. I think that explains why I am seeing less rutting activity as well. When the does aren’t concentrated in certain areas it’s not as effective for the bucks to spend a lot of time making scrapes.

There is still plenty of time left in the season to fill a tag or two. New Hampshire Rifle opens this Wednesday and I will be shooting a doe if I see one. It has come to that. The writing is on the wall for what kind of time I will have to spend in the woods for the remainder of the season, so there is no need to hold off any longer. My wife mentioned to Sam the other night that our venison stores are getting low and that we need more. When I heard that I stopped what I was doing and looked at her. Our eyes locked. Never have I felt such a deep love connection than at that time. Mercy.

Deer season is in full swing. Have you had any luck yet?

Hey Tim, I am with you in having a tough season! I missed a doe opening day with the bow. Saw multiple deer out of bow range for the next two weeks, including one day I sat for fourteen hours, only to see eight deer in the last twenty mins out of bow range. It was hard to not wrap the safety line around my neck and jump from the tree….haha. I had another similar experience opening day of muzzle loader, but this doe crept up on me on the wet ground. I was focusing on movement to my right… Read more »

I like to think that the bucks didn’t dodge me this year, I just dodged them. I had a few nice bucks on camera at my stands on nights I wasn’t able to hunt. That’s just the way it goes, unfortunately. Sounds like you have a good chance at getting one. Just keep going back…sooner or later something good is bound to happen!