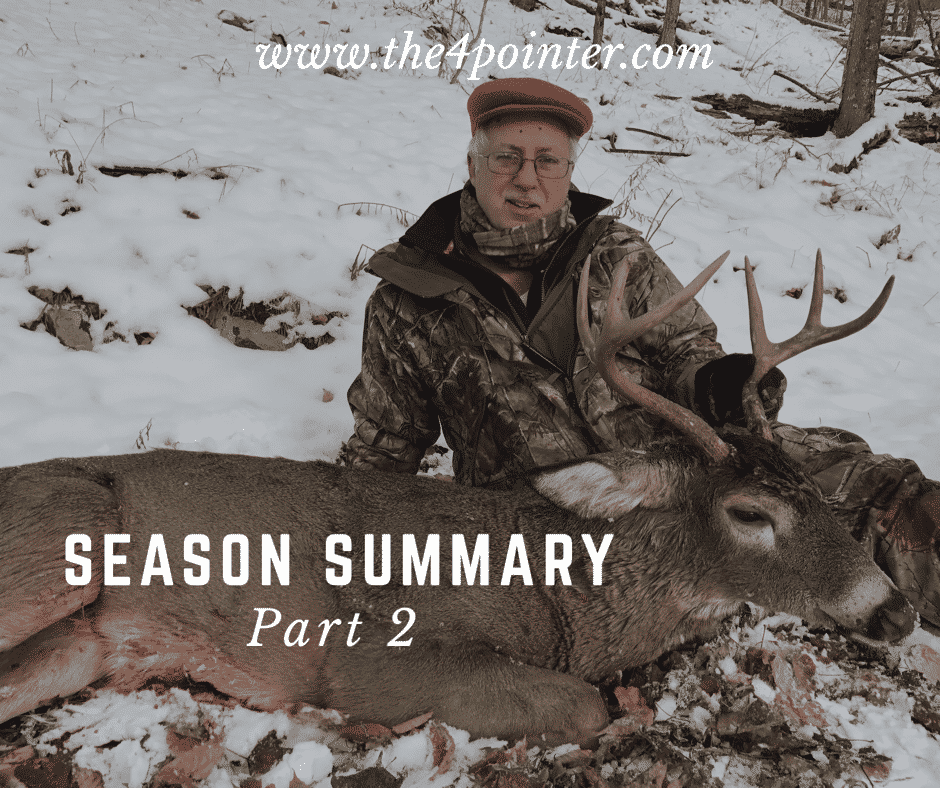 As I mentioned in the previous post (Hunting Season Summary – Part 1), the abundant food situation was similar in Vermont as it was in New Hampshire. However, I did have some camera’s out in Vermont during the preseason that helped identify a few decent bucks that were in the area. These deer were afraid of the daylight as well, but at least I had a general sense of their movement patterns during the middle of the night.

My mobile strategy worked well, and had it not been for a few bad breaks I would have had a deer. The first was when the guy we invited to hunt with us missed a buck out of the ladder stand I was originally thinking of sitting in on opening morning. His misses were the main reason for my mobile strategy. If it hadn’t been for him, the only mobility I would have experienced would have been driving my deer to the check station.

The second occurred before legal light on opening morning when I bumped a deer out just inches from where my impromptu stand was going to be for the morning. I could see the deer run away in the moonlight. It had a big body and was standing not more than fifty yards from one of my camera locations where I’d been capturing semi-regular pictures of a buck at the end of the summer. Was it a buck? I think so. 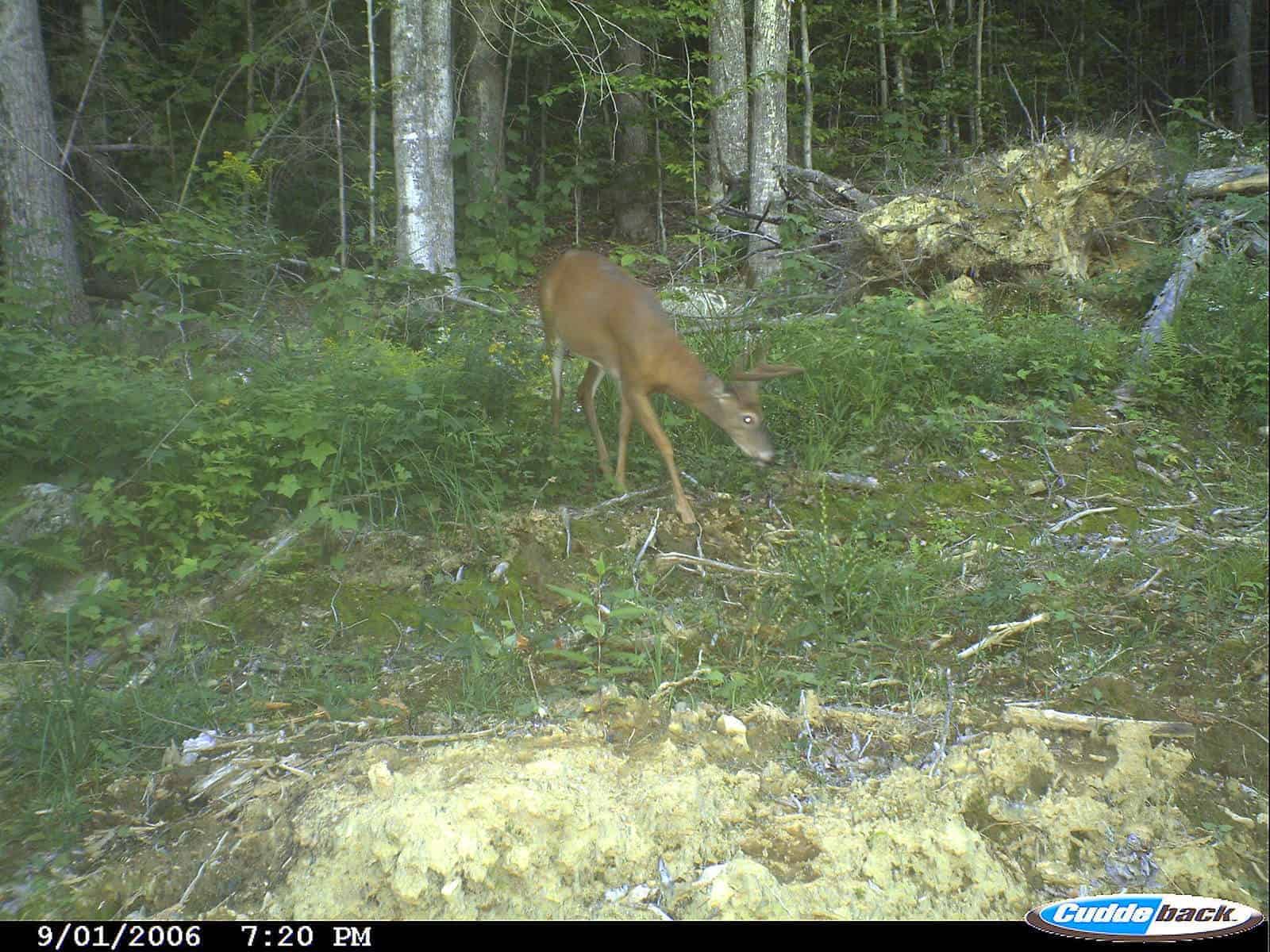 The third bad break was later that same morning when I slipped into an area with the wind at my face. My plan was to still hunt and call every ten to fifteen minutes. I’ve called in two bucks in this same area with a grunt call in the past, both spikes and during muzzleloader season. This time I had a buck respond right away and he came jogging in from the north along the side of the hill. I never saw him but heard him loud and clear in the dry leaves. Just when he was about to crest a little rise, the wind shifted and he caught my scent. It was over before it began. He trotted away blowing as he went.

Opening day ended with three experiences with bucks (assuming the one I ran into before light was a buck). I suppose that’s nothing to complain about, especially in Vermont.

The highlight of the season was definitely the morning that dad shot his deer. (Click here to read!) The weather had turned chilly and a couple of inches of snow fell during the night setting up a perfect morning for tracking. I cut a fresh track before light and decided to follow it. The buck was traveling slowly, stopping to feed from time to time, so I backed off until it became light for fear of pushing him before I’d even have a chance to see him. I waited until light and jumped him anyway when I stepped on a branch and snapped it in half thirty minutes later. Thankfully, he changed directions and ended up walking past my dad minutes later. 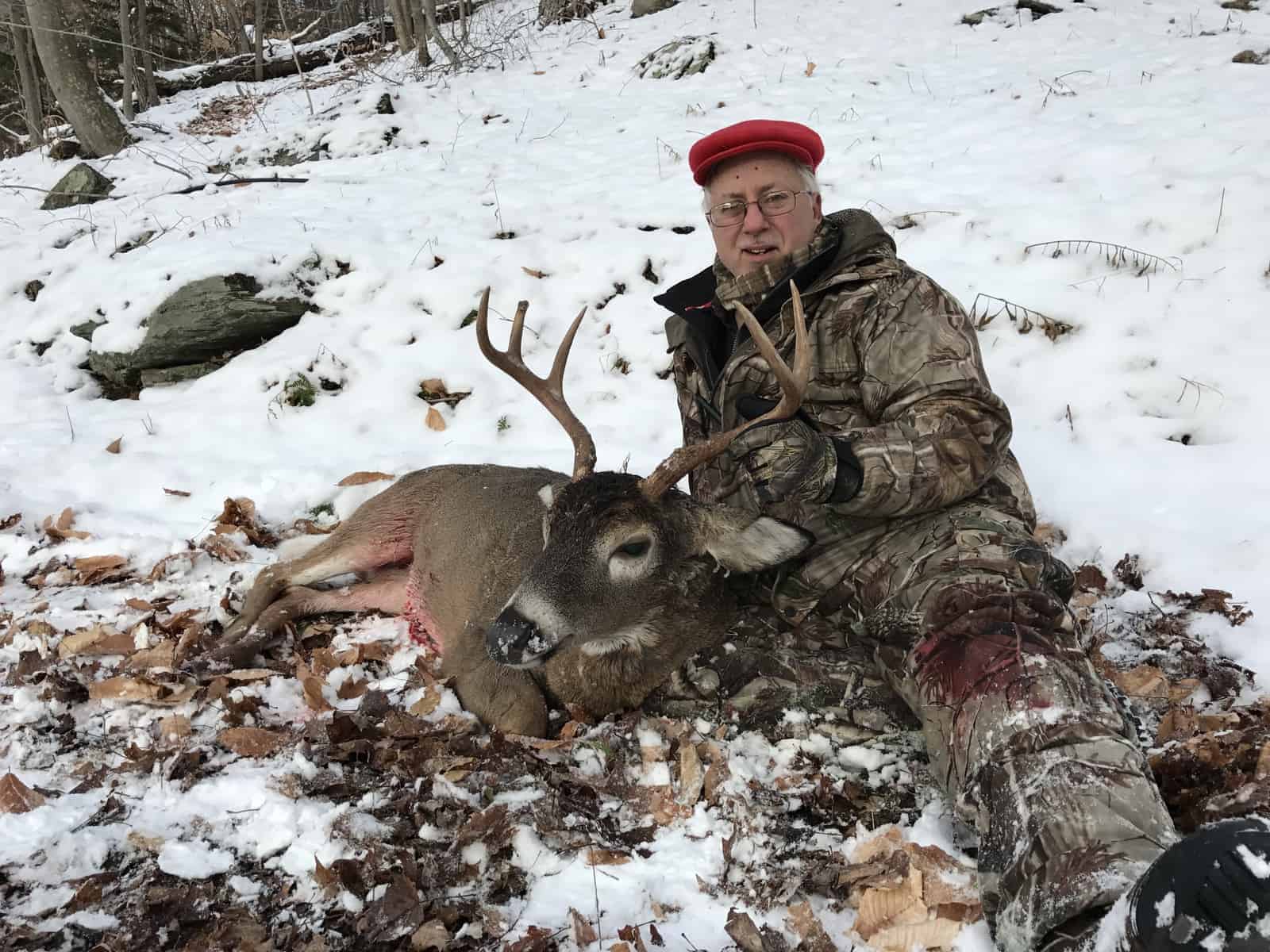 In the forty-seven hours I logged while hunting Vermont rifle season, Dad’s buck was the only deer I saw if you don’t count the one I saw run away in the moonlight on opening morning. Even then, I only saw a flash of his deer and wasn’t sure if it was a bear or deer at the time. Dad’s lone gun shot and trail camera photos helped piece together the story after the fact.

Sometimes I think I hunt the same area to a fault; I am a victim of my own stubbornness. Many times I have considered jumping around from property to property hoping to find the magical honey hole that’s holding a buck that will show up during the daylight. But in the end, I am more driven by the challenge to overcome adversity where I am at and I keep going back. Perhaps that sounds foolish to those who are only interested in filling a tag. To me, it’s about the hunt and the challenge of overcoming long odds. Deer shot under those conditions are the most rewarding.

Muzzleloader season was a different story. I had a coveted doe permit for a different area than where I hunted during rifle season. Filling one of those is analogous to a professional basketball player making a layup. In all my years of holding a doe permit, I cannot remember a year where I didn’t fill one when I put forth an effort to do so. Well wouldn’t you know it, there is a first time for everything. Of course, I did pass on a little one and opted not to shoot at one that was on the edge of the range I felt comfortable shooting. I don’t regret either one of the decisions, which helps confirms to me that they were right. Either way, my doe permit was turned into fire starter material.

It’s almost too painful to revisit Vermont archery season. Once again, I saw very few deer, but I did have two does within range. The first was a chip shot, but a stupid sapling jumped out and grabbed my arrow. I misjudged the distance on the second deer. Each time I returned to the scene of the crime, it was almost embarrassing to relive the experience. Good thing I’m the only one that knows about it.

I’ve done a lot of heavy duty thinking since the season closed almost three weeks ago now. I wish I had a magic ball that could tell me what I should have done differently. I’d even be happy knowing how close I was to sealing the deal. How big was that buck that came into my call that I never laid eyes on? And how about the one that I tracked on the last weekend of the season? I wonder what the outcome would have been if I’d been able to dedicate an entire day to chasing him. His walking to running tracks in the snow verified that I’d been right on his tail. No doubt he’d seen me coming from his vantage point higher on the ridge.

But as much as I’d like to own a magic ball (I could make a killing at horse races), I’m not convinced it’s something I want for deer hunting. What would hunting be if the mystery was removed? The desire to know what’s over the next hill is what keeps dreams alive. To remove that would take the hunt out of the hunter. We’d just be er’s, not hunter’s. That’d be weird.

I’ll tell you right now, I’d really like to know how big the buck was that I called in. To hunt through an area that large and work my way close enough to him to then call him in just the way I’d planned is a success on its own. Do I wish that I’d been able to finish the deal? You bet I do. But there is some satisfaction in knowing that I’d outsmarted the king of the woods on his home turf. In the end, he won, but only for a reason out of my control.

Every part of me wishes that my season had played out differently. My own mistakes prevented me from putting at least two additional deer in the freezer and those experiences will eat at me all year.  There is an element of wanting to redeem myself that will keep me thinking about opening day from now until it arrives in mid-September, but it’s the mystery of what didn’t come to fruition that will keep me dreaming about it.

Perhaps next year I’ll cross paths with Mr. Big and the scales will tip in my favor.

Thank you very much for tagging along with me this past year! I’m already looking forward to hunting season this fall. 250 days to go…