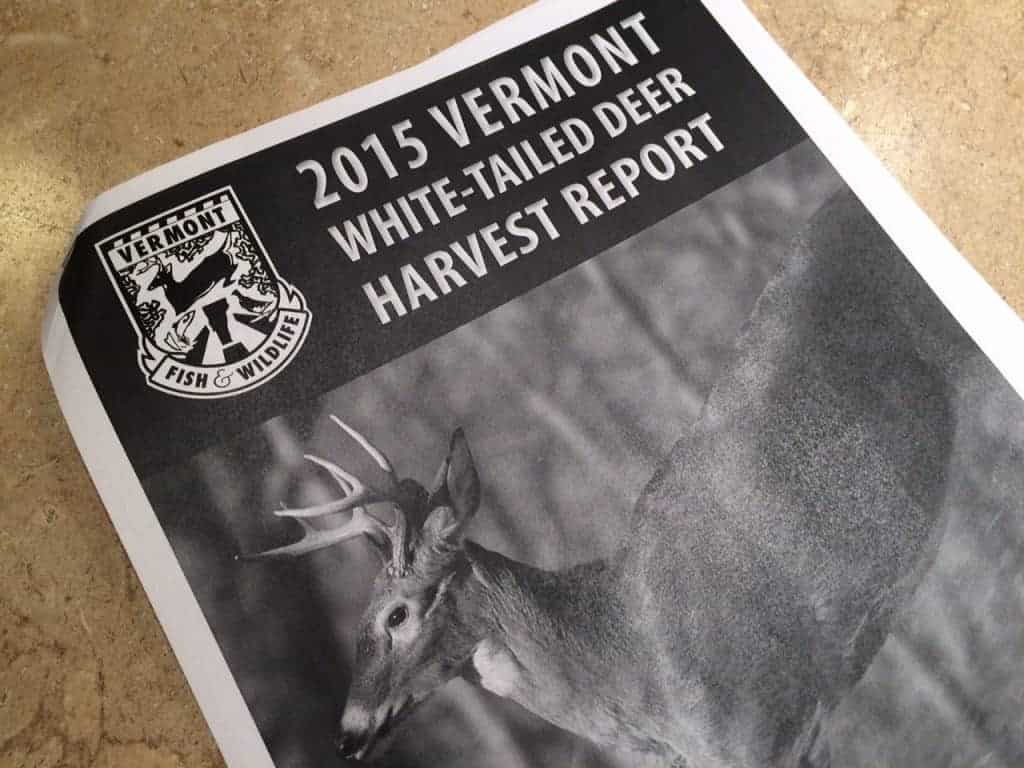 I admit I get all geeked out when the Vermont Deer Harvest Report is published each year. It’s just that cool. The 2015 report is no exception. On the heels of a tough winter the buck harvest was above average, adding to the intrigue. I’ve been looking forward to it since the sun set on the final day of deer season last fall.

To save you time (or waste it), I’ve made seven observations about the 2015 Vermont Deer Harvest Report you may find fascinating (or useless).

1. I found the fourth paragraph on pg 2 to be incomplete, so I have made additions to the text in bold.

“Very warm weather and snowless conditions persisted throughout the 2015 hunting seasons, making for extremely comfortable hunting conditions thereby reducing my hot chocolate intake, but limiting deer movement and making it more difficult for hunters to locate, see, and harvest deer. Additionally, apples were exceptionally abundant when I went apple picking at Wellwood Orchards and acorn and beechnut production were good in many areas, especially on the huge oak that towers over my neighbors’ driveway where their cars are parked. Widespread availability of fall foods allows deer to be more dispersed, which can make them more difficult to locate and pattern. To add to the difficult hunting conditions, cell phone coverage continues to increase in rural areas of Vermont making it harder to see deer when hunters stare at their phones more than they have in the past. This is Cell phones are why hunters I saw fewer bucks (and total deer) than they I did in 2014 (Table 2), despite an increase in the harvest.”

If you happened to talk to other hunters this past season, you probably heard more than one of them complain about a lack of deer. As it turns out, that was true in almost every WMU across the state. Overall, hunters reported a 31% drop in number of deer seen per 10 hours of hunting. That alone is not news to most, but reading that the harvest increased by 8% over last year despite the hard winter, tough hunting conditions, and the lack of deer seen is very interesting.

Strange if you ask me, though I’m not sure what to do with it other than file it in my “strange” category.

In the past, a single winter severity index has been given for the entire state. This year, it has been given for each of the five regions of the state on page 7 on the report. This helps show the vast difference in winter severity in our little state. The Lake Plains and Western Foothills cumulated WSIs of 35 and 41, respectively. In contrast, the East Central and Northeast regions of the state reported a WSI in the mid 80s and approximately 115, respectively. To understand how those numbers relate to the long-term average I suggest looking at the chart. But to put it simply, the winter wasn’t that bad in the some areas of the state and it was very bad in other areas. It sure felt bad where I live. When my snowblower decided to give up I almost did too.

Studying this chart for a few minutes can help you understand why the harvest was higher in some parts of the state and lower in others.

4. What was the success rate of rifle hunters in Vermont?

This isn’t stated in the report but is a question I often see asked on popular online forums. To determine the answer, we need to know how many licenses were sold. Not only that, we will need to know how many of those license holders actually hunted. With a little digging on the Internet, I found that last year there were 72,930 license holders in Vermont. (Click Here; US Fish and Wildlife Service) Unfortunately, what is not clear is if those license holders all held a deer license, but for the purposes of this exercise we will just assume that they did.

We also learn on page four of the Harvest Report that 20% of license holders who responded to the Hunter Survey said they did not hunt this past year. On the same page we also learn that 6,628 bucks were reported by successful hunters.

Let’s do some math:

On pages 9 and 10 we find a summary and list of the heaviest deer (over 200 pounds) harvested last fall. There were eighty-one in all and these big boys averaged 7.69 points per rack. What caught my eye was the 207 lb 4 pointer shot in Bakersfield. I love big four pointers. 🙂

6. The towns of Vergennes, Burlington, and Winooski failed to have a deer reported in 2015.

Remind me not to hunt there in the future.

If only I had been successful last year…then I could have submitted a tooth for aging! A little over 4000 teeth were collected last fall – 1,348 by biologists at reporting stations and 2,672 by successful hunters (not me). That’s a lot of teeth and should provide some very useful information about the age structure of the buck harvest as well as help determine antler growth by age class. I still have some concern that the teeth submitted by hunters will be skewed toward the older age class. I’d be willing to bet some hunters didn’t care to take the time to submit teeth for a younger buck but others were much more willing to submit one if they’d harvested an older buck. I guess we shall see when the results come back later this spring.

That’s it for now. There is a lot more information packed into this report, and I highly encourage you to take the time to read through it (Click here) before attending one of the five public deer and moose meetings planned for this spring which are:

Have a good week, everyone!

It sounds like they got you Hook Line and lead free sinker!!

I’ve always been a big supporter of the deer meetings. Hunters should be attending them!