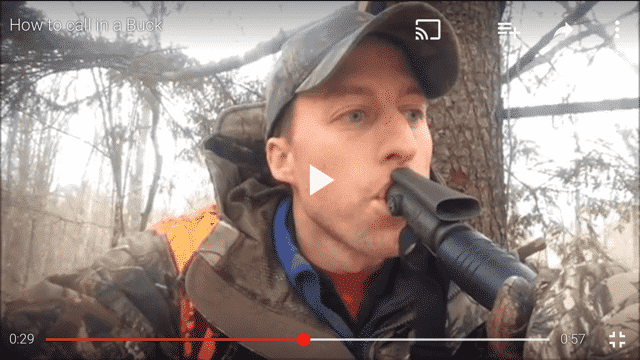 After shooting a doe in New Hampshire last week I have settled back into my routine of staring at trees and drinking hot chocolate. Good Times.

Vermont’s Rifle season opened last Saturday and I spent a good part of my day wandering through the woods looking for any signs of deer activity. I discovered quite a few scrapes, though they were all a few weeks old, and a couple fresh rubs in the typical locations. I also saw some hunters. I chatted with one guy for a bit and I watched another guy drive back and forth on his four wheeler at different times during the day. Mostly he drove by during the best part of the day. I can only assume he considered himself to be “hunting,” but it’s clear his definition of the term is different than mine.

I did manage to see a deer around noon, but I only saw one end of it, and it was the wrong end. It was a big deer though – more than full size – probably a 251 pound 12 point. I’ll get him next time.

I didn’t hunt again until this morning… I decided to hunt for a few hours before going to work. The weather was great – overcast, misty, and not too windy. I was set up on the side of a ridge where the natural terrain is shaped in a way that creates a funnel effect on the deer as they filter through the area. In the middle of the funnel, which is about 200 yards wide, there are multiple blow downs which force the deer to walk around one side or the other.

On one side of the blow downs we have a ladder stand. Once you are in it you can see the entire width of the funnel, though you can’t necessarily shoot everywhere you can see because it’s too brushy for a shot.

So I’m sitting there minding my own business just staring at trees through my binoculars, and a deer runs into my field of view. Of course, he was on the other side of the funnel. I could tell immediately that it was a buck. I could tell this because I saw his antlers.

He appeared to be out for a morning jog and was headed in the wrong direction. I put my binoculars down, and I grabbed my grunt call. I blew two grunts as loud as I could in hopes that I could stop him. Then, I quickly picked my binoculars back up, but I couldn’t locate him.

A few minutes later I found him again. The grunts had indeed stopped him but right behind a tree. I saw his rear and then his head. Another quick look at his antlers verified that he was legal and my heart started pounding a little harder.

At this point, the buck showed no signs of closing the distance between the two of us. He looked my way a few times, but no matter how many times I called to him he wouldn’t come any closer. I only called when I could see that he was moving in the other direction. Over calling in a situation like can do more harm than good, and I was careful not to do so. He just wasn’t in the mood to respond this morning. The last time I saw him he was working his way along the hill and out of my life forever.

I am sure some are wondering why I didn’t shoot if I had all that time to watch him. Trust me when I say I would have shot if there had been an opportunity. I’ve never had a problem taking the safety off when the time is right, but this morning it wasn’t. In my opinion, the only chance I had at this buck was to draw him closer to me by fifty yards, and the only way to do that would have been to call him in. It was too brushy and a long shot to where he was. It’s doubtful I would have even seen him had I not been looking through my binoculars.

Oh – I put together this sweet instructional video on how to call in bucks with a grunt tube. It only seems right that after I failed to call in a buck that I show you how to be successful at it. Note: the audio is not great and neither is the editing. Actually, the entire video is awful. Enjoy.

It sure looks like a lot of nice bucks have been harvested during the Vermont Rifle Season so far! I mean some big ones! Giants! Corkers! Wicked Good ones! Maybe I’ll join the lucky few soon.

If you haven’t liked The 4 Pointer on Facebook yet, doing so will probably be the best thing you do all day. Do that here: The 4 Pointer Plus, you can also subscribe by email by clicking here: Subscribe