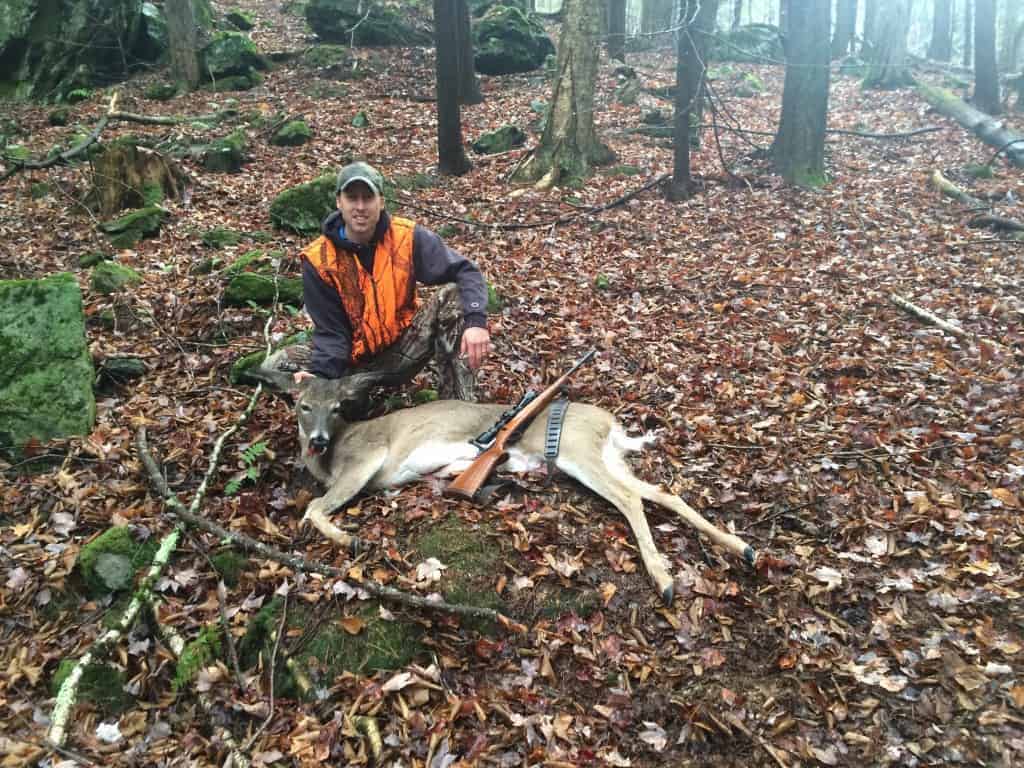 “It’s just a doe,” I told my wife when I called her. The words didn’t feel right when I said them because I was happy with the doe, and I didn’t mean to diminish the accomplishment – or the doe. I won’t lie – I was hoping for a buck – but I was ready to shoot a doe. That’s what I did.

There are a couple of reasons I was willing to shoot a buck or a doe. First, I’ve hardly seen a deer this year and with Vermont Rifle Season right around the corner I wanted to make sure I put some venison in the freezer. Second, my wife really wanted venison.

It was a dismal opening morning to say the least. It rained steadily for the first hour which was just long enough for me to learn that my gloves weren’t waterproof. With the temperatures in the 40’s and sponges for gloves, I was feeling a little chilled.

I sat for the first hour and then decided to still hunt further down the hill. One of the best things a hunter can do is to hunt by “feeling the moment.” Let the conditions dictate your movements and work in concert with them. All morning long the wind was blowing down the hill, but an hour after light it switched direction and started blowing across the hill to my right (north). This gave me the opening I was waiting for, and I was able to use the wind to my advantage and work my way downhill and eventually cut across the hill to the south.  I was also feeling a bit chilled which counts as part of “feeling the moment” as well.

I slowly hunted downhill, stopping at every rise in terrain and scanning. I also called from time to time. Signs of the rut were still nonexistent, but it was November 11th after all and bucks were sure to be moving somewhere!

The general movement of the deer in the morning is to filter down the hill. I still haven’t figured out where they bed for the day, but it’s somewhere on another hillside. In the morning they come down, in the evening they come up. So, as I hunted sideways along the hill I kept my eyes focused up. Sure enough, I noticed the back of a deer just above me. I could tell there was more than one and I was ready. The lead doe continued down the hill and then turned to come straight at me. At twenty-five yards she noticed something wasn’t right (that would be me). My scope was on her and she was facing straight towards me.

I’ve never shot a deer straight on before and contemplated waiting for her to turn, but she knew something wasn’t right. I could tell she was about to bolt, so I pulled the trigger.

She dropped straight down.

Thank goodness Josh was willing to help me drag it up the hill. It was hard enough with two of us dragging!

The doe weighed 104 pounds and was aged to be four and a half years old. I’m no expert at aging deer, but this one had me fooled. From what I have studied, aging deer by looking at tooth wear is not as accurate as sending them to a lab. If wrong, biologists tend to be a year off. Sometimes, though rare, they are two years off. Was the doe four and a half? Maybe, maybe not…

I mentioned earlier that the rutting activity in the area is virtually nonexistent. Wouldn’t you know it – a check of a trail camera yesterday had some cool videos on it that you can see below. The first is a buck we haven’t had on camera all year. Actually, we’ve only had one buck on camera this year which Dad shot yesterday afternoon. That story will be next…

You know the rut is in full swing when the bucks are chasing in broad daylight!

You can’t see the head on this one but if you turn your volume up loud you’ll be able to hear it grunt!

I hope you’ve been entertained again. If you have, considering sharing this post with your friends! Don’t forget, you can always subscribe for email updates by clicking here: Subscribe